HomeLatest News10 gifts for fans of TV series and for those who cannot...
Latest News 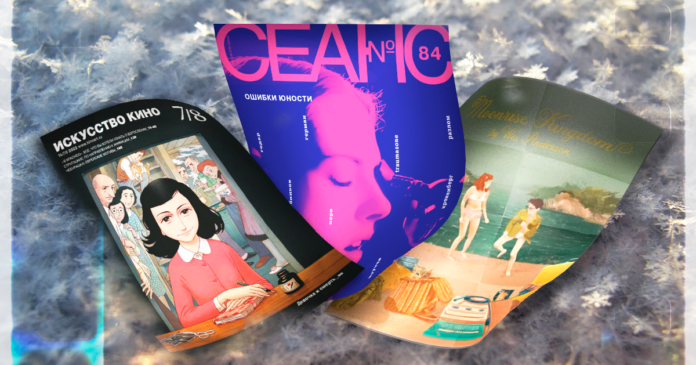 If you have at least one friend who is ready to go to the cinema at least every week, if he just showed something good there or manages to watch all the new TV shows in one weekend, then this collection will come in handy for you. .

Very good cinema with an excellent repertoire. Now, for example, Ruben Östlund’s “Triangle of Sorrows” and George Miller’s “Three Thousand Years of Wishes” are playing there. What is convenient: you can use the card several times until the limit runs out.

A good book that will appeal to fans of Tarkovsky and those who are generally interested in cinema as an art form. By the way, Bird himself translated it, so you can count on the maximum transfer of the author’s intention.

A beautiful art poster based on one of the kindest movies by an American director. In addition, double-sided – it will be possible to change depending on the mood and changes in the interior.

Suitable for nights when you really want to go to the movies, but somehow the weather is not conducive to leaving the apartment. And it’s just a very cozy confectionery flavor with warm caramel notes. By the way, in addition to the diffuser, the popcorn line has cologne, bath salt, and body scrub.

Giving an annual subscription means making a “lasting” gift that will please the recipient not only on New Year’s Eve and a few days after it, but much longer. Especially if it is a subscription to one of the oldest and most famous film magazines.

The literary debut of the cult American director based on his latest film to date. The characters are the same: the once successful Hollywood actor Rick Dalton, his permanent double Cliff Booth, the rising movie star Sharon Tate, the notorious criminal Charles Manson.

An all-purpose cream that smells like cherry pie from David Lynch’s cult mystery series. In the composition: grape seed oil, mango and jojoba, peach oil. Since winter has just started and the skin will still need a lot of care, you can take two tubes at a time. Fortunately, Laboratorium has another “Twin Peaks” creamer, but with a coffee and donut aroma (very good).

Another important magazine for movie lovers, founded by film critic and director Lyubov Arkus. An annual subscription is four magazines (Seans comes out once a quarter). Bonus – 10% discount on books.

A compact projector, thanks to which you can watch your favorite TV shows and movies anywhere, so as not to carry a laptop with you (and not be distracted by work emails on the go). It is positioned mainly as a gift for children, but we are sure that adults will also appreciate such a gift.

A fragrance inspired by the same Khudozhestvenny cinema. The composition of the perfume, which is supposed to refer to the cinema of the first half of the last century, contains cedar, tobacco, black pepper and a “secret ingredient”.