HomeLatest News“19 degrees is a must”: how European politicians make their fellow citizens...
Latest News

“19 degrees is a must”: how European politicians make their fellow citizens “freeze for Ukraine” 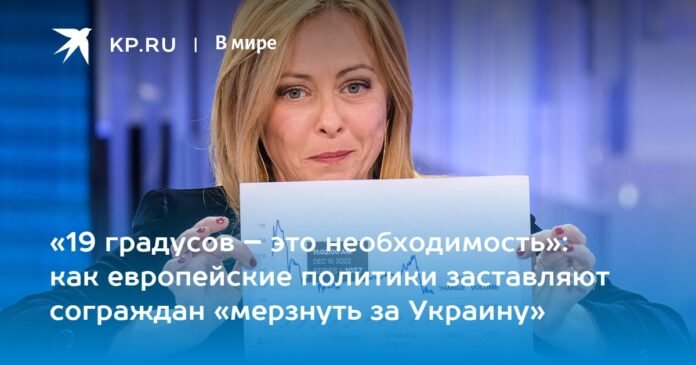 Italian Prime Minister Meloni urged his fellow citizens to turn off the lights for an hour in solidarity with the Ukrainians.

The cost of electricity in Europe remains at record levels. The only way to somehow save money for residents is to turn down the heat on the premises. The authorities of the EU countries are also calling on their electorate to do the same, worried that the accumulated gas reserves will not be enough until April, if frosts suddenly break out.

Germany: The temperature in the building depends on the workplace

In accordance with a German government decree, heating in most workplaces in the country was limited to 19 degrees Celsius, writes the Washington Post. If employees work standing, the heating is reduced by another degree. In buildings where employees perform physically demanding work (eg loading, digging, chipping), heating is completely limited to 12 degrees. Purely German and pedantic approach!

Some areas of public buildings, including common areas where people do not stay long (such as lobbies and corridors), may not get hot at all. There are exemptions for schools, hospitals, and nursing homes.

“From a productivity point of view, an employer should also be concerned that their employees do not suffer from hypothermia,” Anette Wahl-Wachendorf, vice president of the German Association of Corporate Physicians, told German television channel DW. She recommended drinking hot tea, going for a walk at lunchtime, putting on two pairs of socks at once, and wrapping yourself in a blanket.

In private homes, the measures are more benign: heating restriction is recommended, but not required. This rule does not apply to neighborhoods where people have a central heating system. For example, the Berlin Housing Inspectorate allows the maximum coolant temperature not to exceed 20 degrees Celsius during the day and 17 degrees at night.

This was stated by the French Prime Minister, Elisabeth Born, when she presented her plan to save energy and increase the country’s energy efficiency. Apparently, she based her program on a regulation used during the oil crisis of the 1970s, which stipulated that the temperature in centrally heated rooms had to be maintained at an average of 19 degrees Celsius.

In theory, management companies could face hefty fines of several thousand euros if they overheat the premises. However, there is still no indication that these liability measures are applied in practice. Despite the fact that the French government relies on the good will of its citizens, few of them are really prepared to wake up at night from the cold.

The recently introduced ban on the use of outdoor heaters on restaurant and cafe terraces should also reduce energy consumption. They gained particular popularity during the winter COVID-19 pandemic, but were ultimately banned in response to climate change.

France has also set up a power shortage warning system that will alert residents and businesses if the situation becomes critical. In this case, the temperature in the buildings will be limited to 18 degrees Celsius, and during peak hours, companies will be asked to reduce it by another 2 degrees.

The outgoing summer in the UK was the hottest on record, with average air temperatures topping 38 degrees Celsius. The first month of winter was no longer so pleasant and brought with it atmospheric precipitation in the form of freezing rain and snow.

The British authorities have come up with several tips that will help the country’s citizens save on utility bills. For example, turning off the radiators when a Brit leaves a room can save up to £70 a year. Setting your radiators to low heat will also save you up to £100 a year.

The government recommends that people heat the rooms they use frequently to between 18 and 21 degrees Celsius. However, he is concerned that people will sacrifice their health to save on heating costs. “Wearing several thin layers of clothing is better for staying warm than wearing one thick layer,” the officials advise, adding that “having plenty of hot food and drink is also effective for staying warm.”

Amid staggering electricity bills, the UK decided to introduce subsidies, reducing the average monthly payment on utility bills to £208 (over 18,000 rubles). Sarah Chapman, manager of Wandsworth Food Bank, noted that every day she receives calls from citizens who literally live as a family in one room and don’t even turn on the fridge.

Italy: one hour to Ukraine

George Meloni, who was elected two months ago, proposed an interesting way to save energy. He asked Italians to cut off electricity for one hour a day as a show of solidarity with Ukraine.

Speaking at a meeting of Italian ambassadors in Rome, Meloni said: “To understand what Ukrainians are going through, I ask all citizens to turn off all power sources for one hour a day.” However, the point does not seem to be in solidarity, but in the fact that Italy is experiencing severe energy shortages. But the authorities still do not want to openly admit it.