37 million cases per day: the coronavirus apocalypse is approaching in China 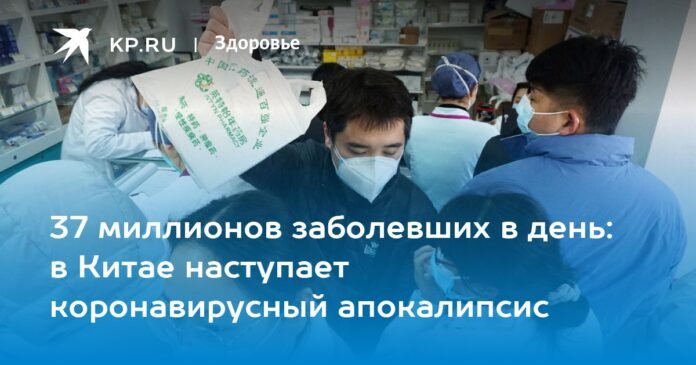 The reason for the storm situation, according to experts, was the weakening of the “covid zero” policy by Beijing.

World media reports on the start of the coronavirus doomsday in China. According to Bloomberg, citing the minutes of a closed-door meeting of China’s National Health Commission, since early December, 248 million people have fallen ill in China. And this is neither more nor less, but 18 percent of the population of China. In just one day, December 20, 37 million people were infected with COVID-19.

At the same time, official data still paints a favorable picture: for example, on December 23, only 4,103 cases of the disease were registered. These figures do not compete with reports from the field: for example, on Friday, authorities in the city of Dongguan (population 10.5 million people) said that between 250,000 and 300,000 people pass a positive covid test every day. As a result, China’s National Health Commission announced that it would stop publishing daily data so as not to embarrass the public.

The reason for the storm situation, according to experts, was the weakening of the “zero covid” policy by Beijing, which they adhered to for the previous three years. This came after a series of mass protests against the harsh restrictions. The authorities went to receive the protesters and in several large cities, after many months of inactivity, they opened shopping centers, markets and restaurants. Rules for isolation and testing, as well as the purchase of medicines, were relaxed; for example, in pharmacies in Beijing, the mandatory registration for the purchase of antipyretics was canceled (so that people would not be secretly treated and avoid quarantine) . For trips on public transport and visits to public places, they no longer require a negative PCR test…

At the same time, when the iron curtain of the coronavirus was opened, something unpleasant turned out: Chinese vaccines turned out not to be very good protection against the BF.7 variant, one of the varieties of the Omicron strain. It is he who is now walking around China. This subspecies has a short incubation period, high infectivity, and is 4.4 times more resistant to neutralization than the Wuhan “wild” virus.

Mathematical models developed by Chen Qin, chief economist at MetroDataTech consultancy (based on data from Internet search queries) predict the peak incidence in China to be mid-December-late January. At this time, several tens of millions of people will be infected with covid every day. Will this be the start of another wave of pandemic around the world? Neighboring India is already taking precautions: State authorities are monitoring the emergence of new strains (in which case the population will be quarantined), residents are being urged to put on masks again and give booster shots of the vaccine.

And WHO chief Tedros Ghebreyesus called on China to open up the statistics so the rest of the world understands what to prepare for.