HomeLatest News55 years ago, the cartoon "Kid and Carlson" was released: the Soviet...
Latest News

55 years ago, the cartoon “Kid and Carlson” was released: the Soviet adaptation was different from the original, but Lindgren was delighted 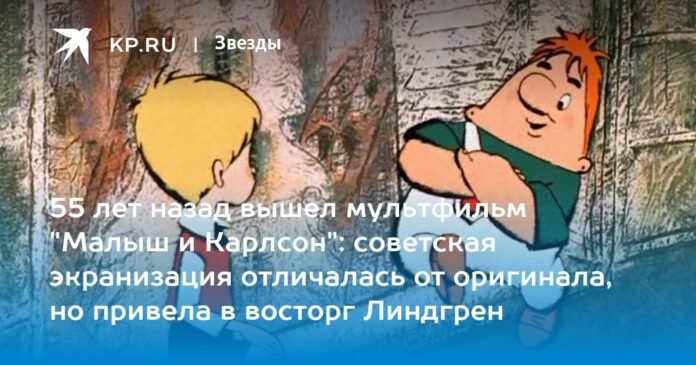 Trifles, the business of life!

Everyone immediately fell in love with him so much that we constantly quoted him, without even realizing it: “Trifles, mundane business.” “Calm down, just calm down!” Or in a conversation with friends: “And I’ve lost my mind, what a shame!”…

The director of the animated film based on the fairy tale of the Swedish writer Astrid Lindgren was Boris Stepantsev (author of many wonderful Soviet cartoons).

Well, the image of the main character was invented by the animator and illustrator Anatoly Savchenko. He painted Moidodyr, Petya and Little Red Hood, Vovka in Far Far Away and the prodigal parrot Kesha.

After the creation of the sketches, the selection of the ideal artists for the dubbing began. Boris Stepantsev went to the ground in search of a textured voice for the main character. He tried on Carlson the main Mkhatovites Mikhail Yanshin, Alexei Gribov, who had juicy and characteristic voices. But they didn’t fit. Stepantsev was completely lost, when suddenly chance helped…

Livanov’s voice is pronounced by Boa constrictor from “38 parrots”, Gena the crocodile, Uncle Au, Gromozeka from “Secrets of the Third Planet”

At that time, the actor Vasily Livanov worked as a director at the Soyuzmultfilm film studio. He beautifully painted after graduating from the Moscow Art School at the USSR Academy of Arts. Livanov has a memorable timbre of voice with a recognizable hoarseness, which he acquired on the set of the film “Unsent Letter”. He voiced natural winter scenes in 40 degree frost. And his voice cracked, trying to shout above the gusts of wind. This colorful hoarseness has been used many times in animation.

The boa constrictor from “38 parrots”, Gena the crocodile, Uncle Au, Gromozek from “Secrets of the Third Planet” speak in the voice of Livanov…

While working at Soyuzmultfilm, Vasily Livanov often went to the neighboring studio to his friends Savchenko and Stepantsev to play a game of chess. Stepantsev complained to a friend that he could not find “his from him” from him Carlson from him. And Livanov suggested: “Let me try!” He looked at the drawings. And as an artist, he immediately caught the similarity between the restless little man drawn with a propeller and the director Grigory Roshal. He was moderately well fed and also “in his prime” from him.

55 years ago the cartoon “Kid and Carlson” was released

Roshal was famous for his kind-hearted but explosive character. The great director and animator Fyodor Khitruk in his brilliant cartoon “Film, film, film!” he portrayed Roshal in the image of an impulsive, scruffy and plump film director, inside whom an engine seems to work, because of which he runs back and forth all the time, clutching his heart and fainting. Livanov decided to parody his voice. Recorded in the studio – everyone liked it. By the way, when Roshal saw the cartoon, he was also delighted. And even he sent Livanov a congratulatory telegram from “Roshal, who lives on the roof.”

Carlson, revived thanks to Vasily Livanov, was liked not only by a million Soviet viewers, but also by the writer Astrid Lindgren. She was so fascinated with him that she asked for a personal meeting with Vasily Borisovich.

Carlson, revived thanks to Vasily Livanov, liked not only a million Soviet viewers, but also the writer Astrid Lindgren.

Clara Rumyanova was entrusted with the voice of the Kid without hesitation. Half of the heroes of Soviet cartoons speak in his voice. But with Freken Bock, which appeared in the continuation of the film, I had to play.

Boris Stepantsev saw Faina Ranevskaya in this role from the very beginning. A strict housekeeper was drawn from her. But Ranevskaya refused. She did not like either the character or the noticeable resemblance: “Am I really that scary?” Also, she had never worked in animation before.

But when I saw the first episode of “Baby and Carlson” I was delighted and I agreed.

On the recording, Ranevskaya pushed the director aside: “I don’t need a pocket Nemirovich-Danchenko! Go there…”…She sent him to the side of the sound control room, but she could have gone further with his character. The director watched the creative process from behind glass.

With Freken Bok, who appeared in the continuation of the film, I had to play

Faina Georgievna was very close to Vasily Livanov. She and she immediately asked: “Did you come up with” jam day “?” – Vasily Borisovich did not deny it. – “I immediately understood – improvisation. Mischievous…”

Other improvisations were born in this talented duo. The director Stepantsev changed something in the habits of the characters. For example, in the cartoon Carlson loves jam. In the book, his favorite food is meatballs and whipped cream pie.

Such authorial liberties are harmless, unlike other fictions and myths. According to one version, Carlson’s prototype was Hermann Goering, the Reich Minister of Aviation of Nazi Germany. According to this myth, Astrid Lindgren and Goering met in the 1920s. They could meet at one of the air shows in Sweden. The engine behind Carlson’s back is an indication of Goering’s occupation. During World War I, he was an ace pilot with charisma and a good appetite. And he might as well impress young Astrid. Supposedly, in her younger years, the writer was carried away by the ideas of the National Socialist Party of Sweden.

But this version was resolutely denied by the director of the Lindgren center. First of all, the writer was not familiar with Goering. Second, he has never been a member of the National Socialist Party.