HomeLatest NewsA 25-liter tumor removed, a baby operated inside the mother and a...
Latest News

A 25-liter tumor removed, a baby operated inside the mother and a stone in the heart: Miracles in Russian medicine performed by doctors in 2022 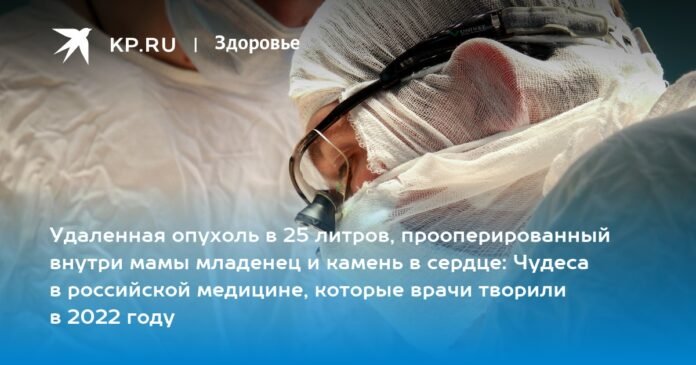 Before the New Year, we dream of a miracle, but our Russian doctors do it with their own hands every day. We have collected only a few unique cases, but they happen every day. Each life saved is a true miracle.

These and other cases are described on the official telegram channel of the Ministry of Health of Russia and the Doctor TV channel.

1. They wanted to treat the arteries in his legs, but they found a stone in his heart

In the NMIC them. ES Meshalkin from the Russian Ministry of Health, the patient had to undergo a planned operation on the arteries of the legs. But during the examination, a life-threatening “stone” aneurysm was discovered – a very hard formation filled almost half of the heart and entered the interventricular septum. Left ventricular aneurysm formed after a myocardial infarction. It really looked like a large and dense chicken egg (the tissues were calcified).

Of course, there could be no talk of an operation on the legs, it was necessary to save the heart. A multidisciplinary team (consisting of different specialists) was involved in the operation: “The instrument made a dull sound when it came into contact with the hard wall of calcification,” said Maxim Lyashenko, head of the department of cardiac surgery of the aorta and coronary arteries. .

Photo: Ministry of Health of the Russian Federation

A blood clot, which filled the entire cavity of the formation, also posed a great danger. But, despite all the difficulties, the non-standard volumetric operation was successful. After cardiorehabilitation, a planned vascular operation was performed on the lower extremities.

2. They operated on a baby inside the mother

A single intrauterine laparoscopic operation for a spinal hernia was performed at the Pediatric University of the Russian Ministry of Health. It was detected in the 18th week of pregnancy in the fetus due to abnormal development of the spine. As part of the hernia are the spinal cord and nerves, it grows with the baby in the womb.

“To carry out intrauterine surgery, a complete replacement of amniotic fluid with carbon dioxide was carried out, which allowed surgeons to perform this jewelry operation,” said Vitaly Reznik, chief physician of the Ministry of Pediatric University clinic. of Health of Russia. – During the operation, the child does not receive hypothermia, threats of infections.

The operation was performed at 24 weeks and lasted 10 hours. The weight of the operated child is 560 grams. The mother-to-be and the baby are now doing well.

Such an operation is the first in Russian practice. There are only a few of them in the world. Therefore, the preparation was done in advance with the development of individual stages in experimental models.

A 65-year-old woman with complaints of abdominal enlargement, urinary disorders, bloody discharge and general weakness was taken by ambulance to the gynecological department of the Sergiev Posad Center for Maternity and Children. The woman’s belly grew for two years, but only when the symptoms became unbearable did she seek medical help.

Photo: Ministry of Health of the Russian Federation

The examination showed a large formation in the pelvic organs and impaired kidney function. Doctors performed a unique operation to remove a huge cystoma, a benign ovarian tumor (a fluid-filled cavity). It was a giant neoplasm with a volume of about 25 liters… The operation lasted about two hours.

4. For the first time in Russia, chemotherapy was carried out during a twin pregnancy

When the expectant mother of twins found out she had breast cancer, she immediately went to the center. Blokhin (“NN Blokhin National Medical Research Center of Oncology” of the Ministry of Health of Russia). Since 2008, they use chemotherapy in pregnant women without interrupting the pregnancy. And healthy children are born!

As told by MD. , Principal Investigator, Department of Combined Treatment of Breast Tumors, NNNN Blokhin” of the Russian Ministry of Health, oncologist Anastasia Parokonnaya, in this case, the difficulty was that the tumor was already large and a chemotherapy regimen method of dense (i.e. concentrated) dose, which had not yet been used in Russia: “But we assembled an international council of doctors and collectively realized that there would be no danger.”

The treatment was successful, the children were born at term and did not present pathologies. Obstetricians of the Center for Obstetrics and Gynecology. VI Kulakov, who was born, immediately called them “dream team” (“dream team”). After some time, the mother of the children received the final stage of treatment – a radical mastectomy (breast removal surgery), during which the doctors did not even find traces of the tumor, everything was resolved during chemotherapy. An implant will be placed in the future.

More wonderful stories in our special project Science Against Cancer.