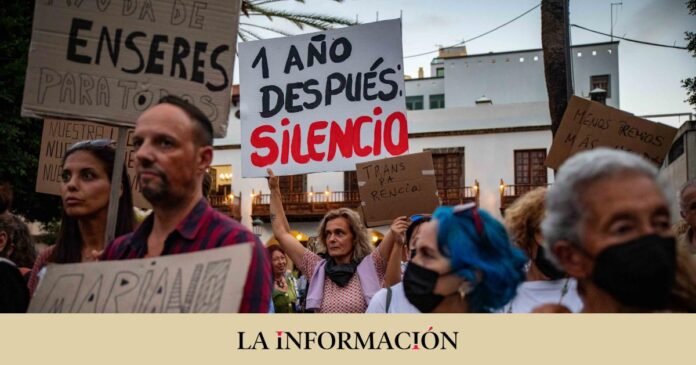 On December 13, 2021, the Cumbre Vieja volcano on La Palma stopped spewing lava and registering any signs of tremor or seismicity. Eighty-five days after erupting, the volcano fell silent. On Christmas Day of that same year, the authorities officially put the volcano ‘asleep’. During the eruption, 3,000 buildings were destroyed and almost 8,000 residents, 10% of the island’s 80,000 inhabitants, were evicted from their homes.

Since then, 600 million euros have arrived in La Palma in aid far from home or towns such as Puerto Naos and La Bombilla, the largest tourist area on the beautiful island, which seem like ghost places, since due to the emission of gases that even today it continues to be produced in the area, everything is closed tightly and residents and merchants are prohibited from returning to their homes and businesses. Another 220 families will spend Christmas housed in houses, many of them prefabricated barracks, provided by the Island Council.

Likewise, since last November the Cabildo has taken charge of the psychological care of the victims who are staying in the hotels and, according to the institution, continues, together with the rest of the organizations, working in the search for permitted housing solutions. to the neighbors who continue in the hotels to restart their life project. And it is that since the Old Summit began to roar on September 19, 2021, nothing is the same on the island.

This same week, on Monday, December 19, the Plataforma de Afectados Volcán Cumbre Vieja 2021 delivered a letter to all the political groups of the Canarian Parliament in which it claimed that the aid received so far “is insufficient, it continues without the promised (such as the 30,000 euros from the regional government)”; the housing response with prefabricated containers is “late and indignant”; the real participation of those affected in the decisions is “null” and, furthermore, they reproached the administrations for their “total uncertainty” about the new territorial planning of their land under the lava.

The main uses of this group of affected people go through a true socioeconomic recovery plan to cover “the 1,000 million euros in losses” caused by the volcanic eruption; an employment plan, housing, health and tax aid, aid for farmers and ranchers due to loss of productive land or a new educational plan that recovers “the Integrated Vocational Training Center project in Los Llanos de Aridane, as well as locating in the island headquarters of the canary universities.

“It is about reducing the suffering that we already have for having lost property, our employment, our territory. It is not a question of grace measures, but of a legitimate right to be helped when one suffers a natural catastrophe”, says one of the palmeros affected by the catastrophe, who receives with relief the news that it seems that in the Council of Ministers of the On December 27, the central government will extend the temporary employment regulation files (ERTE) and the benefits for cessation of activity for the self-employed affected by the volcanic eruption, including those evacuated from Puerto Naos and La Bombilla.

This area where 1,400 people reside, has been a ‘ghost town’ since it was evicted on September 19, when the volcano began to roar. And so it continues, uninhabited, 460 days later. “One year has passed since the ‘end’ of the eruption of the Tajogaite volcano,” says local journalist Moisés Rodríguez, “but the inhabitants of Puerto Naos and La Bombilla are still unable to return to their homes. For me, it cannot be said that the volcano is off until life can be resumed in these nuclei.”

The Jaraco Platform for People Affected by the Volcano in the coastal areas of Puerto Naos and La Bombilla, chaired by Conchi Jaén, has presented a study carried out by a professor from the University of La Laguna (ULL) and a graduate in Chemistry, Francisco Pulido, which indicates that the gases in the ‘exclusion zone’ are not harmful to life. “The measures for the exclusion of the neighbors are not supported or have scientific rigor. In fact, the CO2 levels in these population areas are similar to those that may exist in a closed space with people and that do not represent any danger.” Immediately afterwards, the Volcanological Institute of the Canary Islands (Involcan) has come up with theories “without any scientific foundation” about the origin of the anomalous emanations of carbon dioxide (CO2) in the evacuated nuclei of Puerto Naos and La Bombilla. Meanwhile, the neighbors say they are “desperate” and demand to return to their homes. “We have been waiting for a solution for more than a year. We are devastated,” they say. For many, the volcano, a year later, still does not go out and continues spewing lava, gases and, above all, destruction and despair.