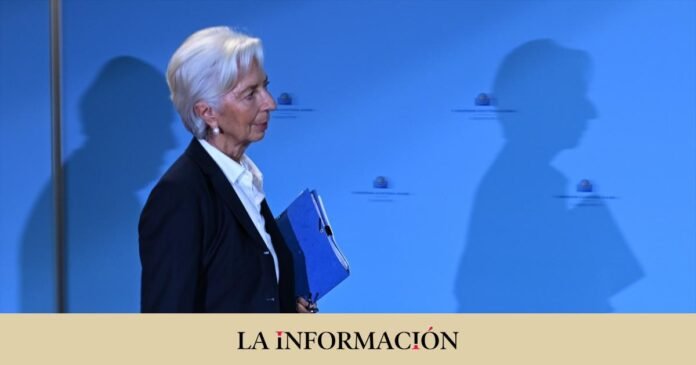 The Eurozone economy would have contracted between last October and December and would find itself, a few days after the start of the new year, at the gates of a recession, the third in barely a decade. The latest macro references that have been published these days (the purchasing managers’ composite index was the last of them) suggest that the fall will be much less severe than expected and, in any case, will have little to do with it. see with the collapse of the region due to Covid-19 in 2020 or with the decline of 0.9 and 0.3% that its GDP increased in 2012 and 2013 due to the sovereign debt crisis, a derived shock of the financial crisis that came to jeopardize the stability of the euro.

The deterioration will be clearer in this first part of the year, when the states will have to continue living with very high inflation rates and with an even greater tightening of financial conditions. The markets do not rule out that the European Central Bank (ECB) will maintain rate hikes at least until next summer. Benchmark rates currently stand at 2.5%, their highest level since December 2008. With inflation barely easing to 10.1% in November, prices will only start to slow down sharply in the second part of the year, as prices for energy, food and industrial goods begin to decline.

The reduction in energy demand with the arrival of good weather or the escalated effect for the industry will be behind this reduction. Given that core inflation – which excludes more volatile elements such as fresh food or energy from its calculation – will remain high throughout the year, it would not be possible to expect rate cuts at the earliest by the end of 2023.

This scenario will allow households to recover purchasing power and give oxygen to the economy. However, it will be from then on when the countries that share a currency will face another of the great challenges that this exercise presents. With no Russian gas circulating through European pipelines, he will have to make a “monumental effort” to replace all lost energy supplies, so economic prospects will once again be tied to energy, explains Ángel Talavera, chief economist for Europe at the consulting firm Oxford Economics, in one of the latest outlook reports published by the firm.

An economic evolution tied to the energy supply

In his opinion, the expected increase in nuclear and hydroelectric production, together with energy savings and the ever-lower substitution of fuels for gas, should allow the Old Continent to abandon Russian gas “without suffering a deep economic crisis.” The European Union has been moving the tab in recent months and is in the process of drawing up an energy reform for the bloc that plans to delink the market prices of renewable energy and gas, as reported by the newspaper ‘Financial Times’. The fact that the demand will depend above all on the weather means that any calculation or forecast will continue to be surrounded by enormous uncertainty for the next few months.

For the moment, the mild temperatures are having a positive impact on reference gas prices and are added, among other things, to the stronger data from the German trade balance in November or the December composite PMI in the euro area (the index expectations advanced to 49.3 points last month from 47.8 in November, getting closer and closer to the 50 that already marks an expansion of activity). The main economic references in Europe “are holding up much better than economists had anticipated”, the Monex Europe experts value.

All in all, the Bloomberg consensus forecasts a drop in activity of around 0.1% for the year as a whole. It all started, again, from energy and inflation. If the evolution of prices allows the ECB to maintain the scenario of rate increases expected by the market, the increases that are to come will not cause a significant deterioration in growth in relation to current forecasts. If inflationary dynamics force the issuer to bear financial conditions significantly, “the risks to growth would certainly increase,” warned Konstantin Veit of PIMCO, the world’s largest fixed-income manager.

Fiscal sustainability on the horizon

Faced with such a scenario, the governments of the euro area would probably intervene again to support growth. In any case, fiscal policy will continue to be expansive in the coming months with very heterogeneous measures between countries. This will be the case until the energy crisis subsides, when the attention of policy makers will “gradually shift from emergency support to fiscal sustainability,” adds Ángel Talavera.

This will most likely be the year in which the reform of the European tax regulations comes into force, which will converge with the largest disbursement of the ‘Next Generation’ funds and their positive contribution to investment. Spain will receive 140,000 million over the next three years, 72,000 million in the form of non-reimbursable investments. They will put a direct burden on the heart of an economy that is struggling to keep its pulse, with growth that will exceed the 4.6% forecast by the Government for the year as a whole, but with activity in a clear slowdown, with an advance of barely 0.1 % in the third quarter.

The perspectives of both the Bank of Spain and international organizations (European Commission, International Monetary Fund or the OECD club) rule out, in principle, a technical recession. For the moment, the labor market is holding up, despite showing signs of weakness in the last month, and prices have moderated to 5.8% in December, according to the progress published by the National Institute of Statistics. This allows us to maintain a notable differential with respect to the Eurozone, which includes our main trading partners.

Share
Facebook
Twitter
Pinterest
WhatsApp
Previous article
Pope Francis supported the idea of ​​a Christmas truce between Russia and Ukraine
Next article
Roskosmos monitors the permafrost of northern Russia: the rate of warming is 2.5 times higher than the world average – Rossiyskaya Gazeta