A new nickname and two coins: the results of Zelensky’s visit to the US 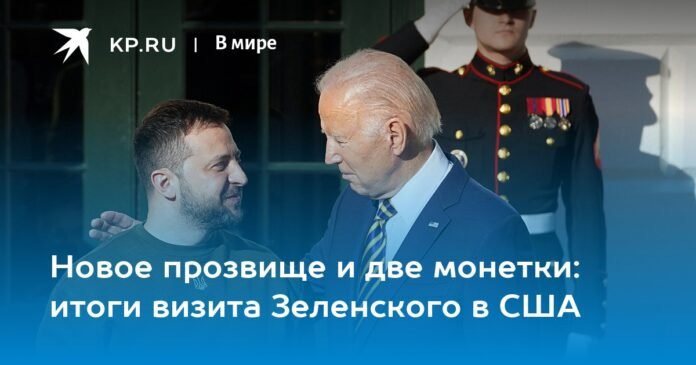 Zelensky approached Biden not only “on the rug” but also to once again plead for financial and military aid.

Ukrainian President Volodymyr Zelensky’s visit to the United States continues. No one doubts what exactly yesterday’s showman was for its American curators.

Everyone, including those from the United States, is sure that Zelensky came to Biden not only “on the carpet”, but also to once again beg for financial and military help.

For example, the son of the former head of the White House, Donald Trump Jr., directly called the president of Ukraine an “ungrateful queen”.

“Ungrateful queen of foreign benefits,” the Republican leader’s son wrote about Zelensky on his Twitter page.

Such a reaction from Trump Jr. was provoked by a statement by a journalist from the Washington Examiner about the upcoming complaints of the Ukrainian president about the “clear insufficiency” of $ 45 billion in the US budget next year to help Nezalezhnaya. And there is no doubt that such complaints will be heard in Zelensky’s planned speech in the US Congress.

Meanwhile, after a meeting with US President Joe Biden, Zelensky got hold of two commemorative coins, the so-called command coins. Such coins or tokens are minted in the United States for a variety of reasons and are a common, but low-value gift.

Share
Facebook
Twitter
Pinterest
WhatsApp
Previous article
Auto expert Igor Morzharetto: I have a technically poor idea how to draw an accident diagram inside a device and put arrows on the location of cars at the time of a traffic accident under stress – Rossiyskaya Gazeta
Next article
Taylor Swift sets a new record with ‘Midnights’