HomeLatest NewsA resident of Ghana has become almost the tallest man in the...
Latest News

A resident of Ghana has become almost the tallest man in the world. 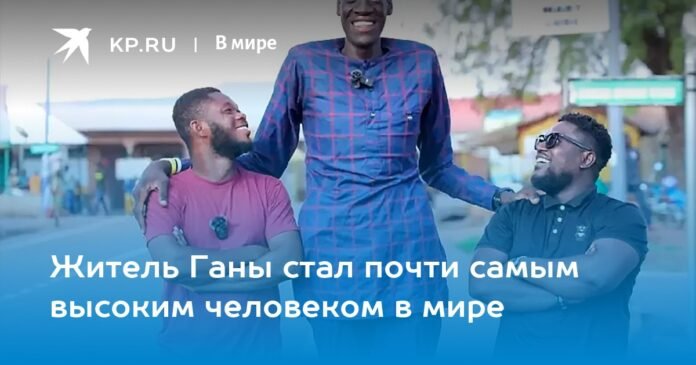 “2 meters 89 centimeters” – either happy, or sentenced 29-year-old local doctors, a resident of Ghana Suleiman Abdul Samed after the examination. Such growth in an instant made the guy the tallest man on the planet. But is it? The measurement problem was that the rural hospital did not have the necessary tools to accurately measure its height. The number is questionable.

A few years ago, Suleiman was diagnosed with gigantism. And it seems that everyone was reconciled with the fact that in the village of Gambaga, in the north of Ghana, a giant appeared, who was given the nickname Avuche, but during the next examination in the hospital, the medical staff was shocked: the young suddenly surpassed the rule. . Lacking other tools, the assembled nurses decided to measure Samad’s height with a stick. Thanks to the stick, they calculated the “new height” that the giant reached – 2.89 m.

To check how accurate this figure is, a BBC journalist came. With the help of a tape measure, he established that Suleman’s height was almost 2.24 cm. The nurses were off by a good 25 inches. Even the tallest man today, 40-year-old Turkish farmer Sultan Kösen, stands at 2.51m.

However, Samed is not surprised that he is still catching up and believes that he will soon catch up with Kösen.

– I’m still growing. If you have not seen me for three or four months, you will immediately notice that I have grown, – says the young man.

He has already outgrown many of the houses in his village, he wears special shoes made for him by local shoemakers out of car tires.

Avuche was first diagnosed with gigantism at the age of 22. At that time, he came to work in the capital, Accra, hoping to save up to study at a driving school to become a driver.

“One morning I woke up with my tongue expanding in my mouth to such an extent that I couldn’t breathe normally,” recalls Samed. In the days that followed, other parts of the body began to increase at a fantastic rate. Then the young man began to turn into a giant.

The rapid growth also brought serious problems, an abnormal curvature of the spine, one of the symptoms of Marfan syndrome, a genetic disease that affects connective tissues. Added a heart defect. Doctors believe that brain surgery can help stop growth, but state health insurance cannot cover this.

As a result, Samed had to give up his dream of becoming a pilot. He returned to his town, along with his brother trying to run his own business.

– I used to play football, go in for sports, but now I can hardly master even small distances, – Avuche admits.

The difficulties that the young man faced do not allow him to lose heart. He is full of life, dreams of getting married and has plans for the future.