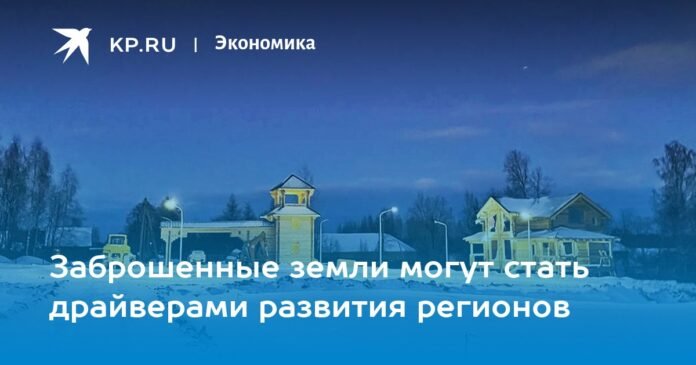 Meanwhile, small farmers cannot always use this land due to regional legislation that prohibits the construction of residential buildings on agricultural land. The solution to this problem is of interest, first of all, to the regional authorities, since private agriculture can contribute to the growth of the regional economy and the development of rural areas. However, regions do not always understand this and do not always meet the needs of agricultural entrepreneurs. Why it is necessary to pay attention to this problem in order to involve abandoned agricultural land in economic circulation, says Denis Buchelnikov, General Director of the Bolshaya Zemlya company, leader of the My Hectare project.

The federal government has already taken a step toward farmers

Peasant (agricultural) companies and other small entrepreneurs are interested in developing abandoned agricultural land. Until July 2021, owners of agricultural land did not have the right to build residential buildings on their plots. As a result, a sad situation developed: the farmer could not live on the land that he cultivated.

In July 2021, Federal Law No. 299-FZ was adopted, which provided farmers and individuals wishing to cultivate the opportunity to build residential buildings on their plots (including on agricultural land). This made it possible, first of all, in a number of regions to increase the area of ​​​​previously unused agricultural land put into agricultural circulation. Secondly, this law reduced the negative trends in the outflow of the population from towns and villages to large cities, and contributed to an increase in the number of peasant farms and personal subsidiary plots in Russia, as well as the development of rural areas. , the popularization of this type of activity and lifestyle for people.

However, some subjects, within the framework of current legislation, limit the effect of 299-FZ at the regional level. And if in the Moscow region, as an alternative, urban planning documentation was developed, on the basis of which land owners can place the buildings they need for agricultural production on agricultural land, then in the Tver region, the Stock 299-FZ was simply cancelled, with no alternatives.

“You and I have the main resource – the largest amount of fertile land in the world,” Oleg Valenchuk, a Russian Federation State Duma deputy from the United Russia party, said in his report.

According to the deputy, this places a great responsibility on the Rosreestr structures, because every centimeter of land must work for one person.

“The more actively we contribute to the transformation of the SNT and the wastelands into modern villages with land not of six acres, but of one hectare or more, with roads and communications, the faster we will fill the wastelands for people to live there, work and produce. an environmentally pure product”, emphasized Valenchuk.

In addition to legislative support, an initiative is needed

Several private initiatives contribute to solving the problem of collective development of large territories without overloading the administrative budget. One of them is the My Hectarea project, which actively works to put agricultural land into circulation, attract new owners to rural areas, provide farmers, gardeners and agribusinesses with land that can become a livelihood for many families, which is especially important at the present time, difficult for the country.

During the 6 years of operation of the project, more than 6,500 hectares of agricultural land participated in production billing, more than 1,700 km of dirt roads were built, a unique digital platform was created for the owners’ association, 75 registered agricultural cooperatives and social Facilities were equipped for the new residents of the settlements. More than 1,800 individual entrepreneurs in the project became farmers, adding agricultural activities to OKVED in order to start arrangement and development of their plots in the Tver region within the framework of 299-FZ.

During the work, the project participants gathered and united under their leadership a large number of figures active in the plow: gardeners, farmers, agricultural cooperatives and SNTs, public organizations and associations, business communities, etc. They all see the future of Russia. and the well-being of people closely linked to the development of rural areas – personal subsidiary plots, small agriculture, family farms, orchards and cabins, agrotourism and rural entrepreneurship.

There are unresolved problems that require the help of state and regional authorities.

Any development of agricultural land is impossible without the creation of a production base for the storage of machinery and other equipment necessary for the cultivation of the fields, as well as without the construction of housing for the workers of even the smallest farms. Large farms solve this problem by locating their production in settlements, allowing them to cultivate all the surrounding fields. But this tool is not suitable for small agricultural productions that involve bushy and small-scale land in agricultural rotation located far from existing settlements, or close to small settlements where there are no free territories necessary to house such productive bases. In order to cultivate such land, it is necessary to build agricultural buildings on it, which the owners need for agricultural production, as well as housing for the workers.

This problem is partially solved by Federal Law No. 299-FZ and Government Decree No. 1509 of September 21, 2020, which allows buildings necessary for agricultural production to be placed on forest agricultural land.

Small business entities can become a good driver for non-Chernozem regions in developing and introducing small-scale and fragmented forest land into agricultural circulation and creating new jobs. The development of agriculture will help to solve the demographic situation of the regions and will slow down the outflow of the population from the rural areas, and will also help to popularize the rural lifestyle and inspire the youth. Agriculture can become the basis of food security for many families whose income levels have already changed or may change in the near future in light of the country’s economic situation. However, this requires the adoption of appropriate legislative initiatives at the regional level.