HomeLatest NewsAbout Philip and Alsou, about fate and sausage: what made "Self-Irony" inedible
Latest News

About Philip and Alsou, about fate and sausage: what made “Self-Irony” inedible 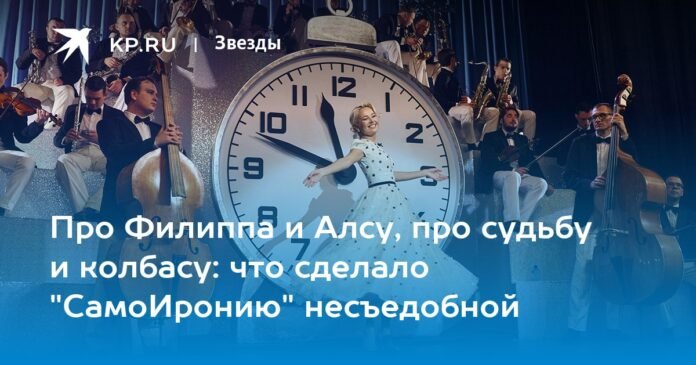 Even before the broadcast, this film became an ideal irritant: people who did not have time to waste all their bile were given an excellent target for vicious attacks, which, in turn, became a good basis for unstoppable excitement. precedents (although not entirely positive). . And now, when everyone finally saw the film, many are probably a little confused: they say, where is everything that we so unanimously hated in advance and so unanimously sprinkled with garbage?

As you know, even before the premiere, Self-Irony, based on Eldar Ryazanov’s masterpiece, was in unison accused of desecrating the beloved classics of Soviet cinema; this attitude, in particular, was facilitated by the choice of the main actors. If the people were ready to accept Timur Batrutdinov in the image of Lukashin calmly and even indifferently (and when did the artist Batrutdinov really care about someone?), then Philip Kirkorov in the form of Ippolit, Olga Kartunkova in the role from Nadia, and especially her namesake Buzova in the image Gali brought the audience with half a twist: “Disgrace! Shame! We will complain!”

But in fact, if anyone should complain here, it is only the aforementioned Buzova: in the film, in which the classics were supposed to be mocked, this very classic is treated with respect, even amazement, but Olya … Of course, Buzova, as a person who has made a name for herself from an absolutely empty place, is well aware that any mention/appearance on the pages/screens is always a plus for a person of her format, but even she, I suspect, she clenched her fists twenty times as she watched, so viciously that even her ex-boyfriend David Manukyan, who allegedly beat up his star girlfriend, did not get along with her. Endless jokes (mostly, by the way, quite worthy) about Buzova’s inability to play and sing became the leitmotif of the entire film, in which – and for this special thanks! -Olya was not allowed to demonstrate her vocal “dominance”. She got to the mic only in the end credits, but does anyone watch them?

In addition to poor Olenka, the authors happily trampled almost all the major TNT projects (they called themselves “Self-Irony” for a reason), including “Our Russia”, “The Battle of Psychics”, “Sasha-Tanya “, “Real Boys” and much more. Well, it’s not a sin to clap for this; after all, they could take pity on themselves and moodily shoot arrows at the more familiar and harmless Petrosyan and Drobotenko.

Of course, there were some “excesses on the ground”: what is the appearance of the ex-Kamyzyak Denis Dorokhov in the guise of a stewardess – such a show clearly does not help to improve New Year’s digestion. But in general, everything turned out to be not as terrible as expected (and as someone wanted). Sensible humor, worthy musical numbers, among which the gathered comrades in “Hands up!” looked especially touching. Zhukov and Potekhin, as well as Alsou, who repeated his first clip “Winter Dream” frame by frame. The resulting musical comedy vinaigrette could be safely called edible, if the chef didn’t go too far with one of the most important ingredients: sausage. At first they don’t put it in a classic vinaigrette, but in “Self-Irony…” it suddenly appeared in such quantity that it was almost impossible not to choke on its richness.

The audience, of course, are not complete jerks, they have heard about product placement and understand that today they cannot do without sponsors. And if the name of a well-known manufacturer of meat and dairy products flashed on the screen once or twice, no one would be surprised or outraged: they say, okay, we all understand hard times, the market economy, we survive as the best that we can… But when we are reported for the hundred and fiftieth time on The Impeccable Quality of Sausage, you feel like an idiot trapped, like in a trap, in an endless commercial. And, listening to another ode to the sausage masters, I want to change it to anything, but even if Buzova sings instead of this nightmare! Yes, not very tasty, but honestly.