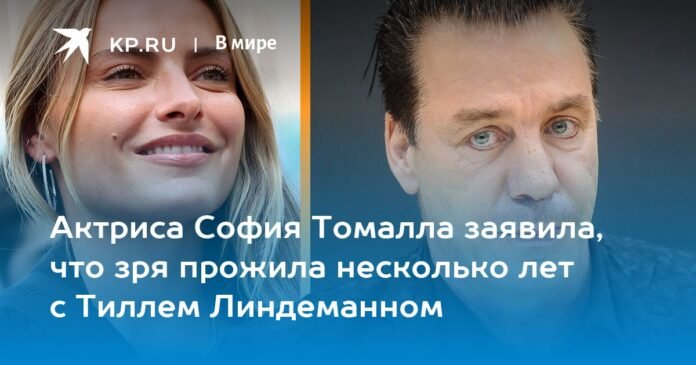 Sofia Thomalla admitted in an interview that she regrets the years she spent with Till Lindemann.

German film actress Sofia Thomalla admitted in an interview that she regrets the four years she spent in an unrecorded marriage with Rammstein lead singer Till Lindemann. She did not go into details, especially since all this was relatively long ago: the couple began living together in 2011, she writes RTL.

Rammstein vocalist Till Lindemann is called a German giant with a big and kind heart. He gathers full houses, plays with live fire at concerts, and when he gets home, he feeds the fish and weaves baskets. After all, it was from the baskets that he began his working career.

One day, his musician friend came to visit him, who heard how, while weaving baskets, Till hummed something under his breath. He immediately offered her a spot as a vocalist in his group, to which he received a surprised refusal. “Which of me is a singer?” Lindemann said, not believing in himself.

But after much persuasion and pleading, he agreed to take the microphone in his hands, and in the end, he gave himself completely to the Rammstein group.

Becoming the leader of the band, Lindemann decided to add sparkle to the performances and learned to be a pyrotechnician. The shows, already charged with energy, became fiery, which became the hallmark of the musical group.

Since he became famous, Till said that he had never seriously engaged in musical creativity, although he was fond of punk rock and played the drums. As a teenager, he was a professional swimmer, including a member of the GDR national team. He even had to come to Moscow, to the Olympics, but due to a serious injury, he could not participate in the competition and generally gave up sports.

Till also writes poetry. It was he who wrote the lyrics to Rammstein. He also makes money in other ways, co-owning a Spanish fashion shoe manufacturer and releasing collectible vodka.

Share
Facebook
Twitter
Pinterest
WhatsApp
Previous article
In Krasnoyarsk, the former judge was sentenced to 13 years in a strict regime KXan 36 Daily News
Next article
Officials may be dismissed from their job with the new law