Aguzarova, 60, wowed fans with a figure in micro panties 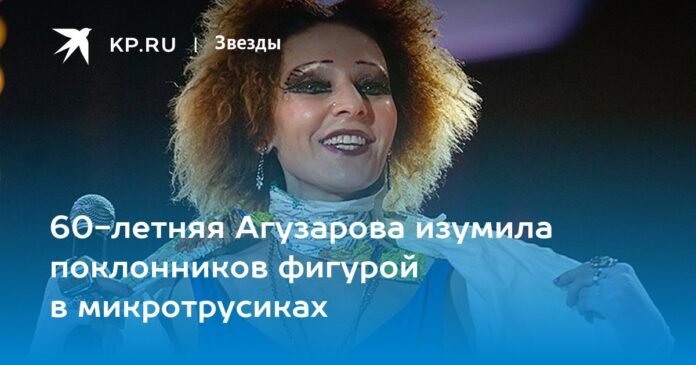 Zhanna Aguzarova congratulated fans on social networks on the New Year, posting several photos on her page. In one of the photos, the 60-year-old singer poses in a black and white striped bikini. The artist completed her look with a panama hat in fun colors and sunglasses.

The star’s subscribers were surprised how young the singer Zhanna looks 20 years younger than her passport age and boasts an excellent figure. The artist has a thin waist, slender legs and a flat tummy. No wonder she can afford to wear the most daring swimsuit. For example, like the one in the photo, with miniature panties that do not hide the hips and stomach.

The singer did not specify exactly where the photo was taken. Perhaps Zhanna was photographed in the mirror during her last vacation. And now I decided to please the fans with a spectacular photo as a New Year’s gift.

Aguzarova in the 90s, the singer began to amaze the audience and went on stage in extravagant outfits, with multi-colored hair and bright makeup. In the 2000s, the artist unexpectedly announced her connection with space: they say that she comes from Mars, and she flew to Earth just to visit. The star’s wardrobe was replenished with silver hoodies, hats from foil and other attributes of alien fashion.

In recent years, the queen of domestic rock and roll rarely shows herself in public. Therefore, each appearance of the singer arouses the most lively interest among fans. This year, the artist gave several concerts in Moscow clubs and in the Green Theater at VDNKh, and all performances were sold out. Although Aguzarova performs infrequently, the demand for her is quite large, and the organizers are ready to pay her good money for singing. Her fees for her concerts range from 20 to 50 thousand euros (1.5 to 3.5 million rubles).

Even moving away from active tours, Jeanne from time to time confirms her title of shocking queen. So, for example, during the World Cup held in Russia, the stage star decided to support our team in a non-trivial way. In honor of the upcoming victory of the Russian team, Zhanna posed completely nude and posted photos on her page on the social network. In one of her photographs, Aguzarova appeared completely naked, covering her intimate places with the Russian tricolor. In another image, the artist took a mirror selfie of herself, proudly showing off her half-covered chest and bare belly.