HomeLatest News"Airy and sufficient": Windows opened the possibility of downloading for Russians without...
Latest News

“Airy and sufficient”: Windows opened the possibility of downloading for Russians without VPN 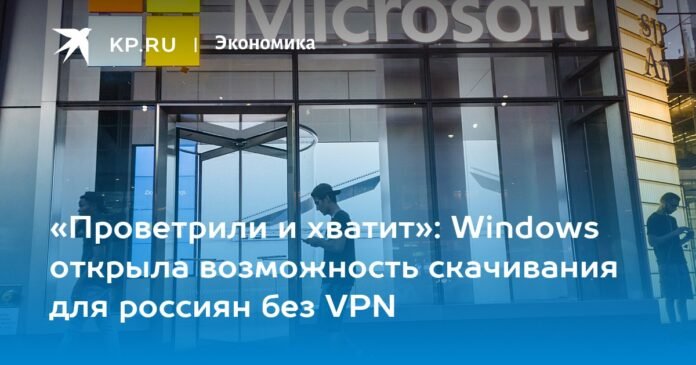 Or a change in policy, or a glitch in the program. Yesterday, Russian computer experts were dancing for joy. The American company Microsoft once again allowed Russians to download updates to its flagship product, the Windows operating system. For six months this was prohibited, and now, suddenly, the window was opened. This can only be explained by the Christmas miracle.

From the official website of the company, users can download any latest version of Windows. Previously, this was only possible through a VPN. True, in order to activate them on your computer, you need to purchase keys. They are not officially available. But here the pirates and… the company itself help.

– Officially, Microsoft continues to comply with the sanctions regime. In fact, this is just an update to existing products. At the same time, the company unofficially launched a large-scale sale of codes for its products in Russia, Eldar Murtazin, a lead analyst at Mobile Research Group, said on air on Komsomolskaya Pravda radio.

According to the expert, they can be bought through pirates. And the company is not opposed to this process. Microsoft does not want to completely lose the huge Russian market. Also, users have already started to switch to alternatives.

– The update restriction pushed ordinary people to think very sensibly: “If updates are disabled today, then tomorrow my Office or Windows may be disabled. How am I going to work? And people started looking for alternatives. In order to stop the decline in its share in Russia, and our country is still the largest market in Europe, the company, in fact, returned it, – explains Murtazin.

It is true that other specialized experts believe that the action is temporary. Or it was a technical error. Proof of this is the fact that some users were unable to download the update from the official website. Or was it a “window of opportunity.” The company unofficially opened the window for several days. Who managed to download, he and well done. And the American authorities can be told that some Indian programmer made a mistake.

Notably, only the operating system update could be downloaded. That is, it is impossible to download Office or transfer Windows to another device officially. However, be that as it may, under current conditions, entrusting your information to the American Microsoft is a regular idea, experts say. It is not known what the US authorities and the company’s management get into their heads. Therefore, no matter what “window of opportunity” opens, for private use it is better to find a more loyal alternative.

– Those who already have this operating system installed know exactly how to do it. Where to go and where to look for activation keys. It is written in the instructions.

– As for new users, the easiest way is to buy a ready-made “boxed” solution. In Russian stores you can buy official Windows licenses. They were imported under the parallel import scheme of the EAEU countries. There are Russian versions and everything you need to install on your computer.

– Experts do not recommend buying pirated versions. There is a danger that downloading from unverified sources will download not only the operating system, but also the viruses embedded in it.

Who else returned to Russia?

It should be noted that in recent months the return of some companies to Russia has begun. Apparently, the economy began to outweigh politics. And the business began looking for opportunities to resume work.

So, Apple strictly adheres to the sanctions regime. But at the same time, he is not even opposed to the fact that new versions of iPhones are coming to Russia in a huge stream under the parallel import scheme. You can’t see through your palms.

Most of the other companies solved the problem quite simply. Or they sell the Russian part of the business to someone else. For example, national businessmen or companies from friendly countries. Or separate local divisions. Make them legally independent from the western headquarters. This was done, for example, by Henkel.

We wrote in detail about how foreign companies adjust to the current realities of the Russian market here.