HomeLatest NewsAlexander Bastrykin announced an increase in the number of murders and rapes...
Latest News 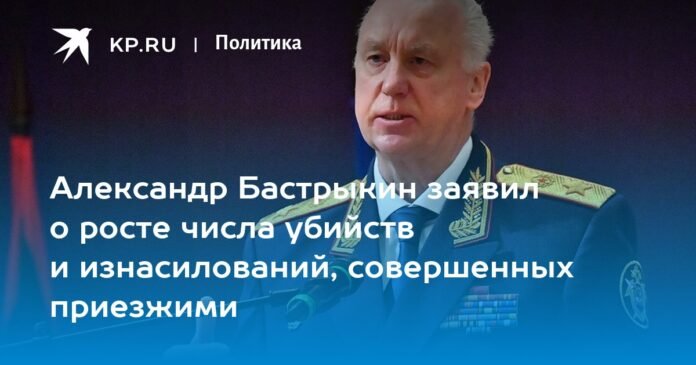 Head of the Investigative Committee of the Russian Federation Alexander Bastrykin.

The Chairman of the Investigative Committee of the Russian Federation, Alexander Ivanovich Bastrykin, held an operational meeting with his subordinates via video conference.

While our men defend the borders of the Homeland, the visitors behave more and more aggressively.

– More than a third of serious and especially serious crimes committed by migrants are registered, including murders – in 16%, rapes – in 12%. In the last period of 2022, all law enforcement agencies investigated 37 thousand migrant crimes, while about 60% of them were committed by residents of the Central Asian republics, Alexander Bastrykin said.

The head of the department highlighted that during the year the investigators sent to justice 1,633 cases of crimes committed by migrants.

The department noted that in Russia an increase in crime of foreign citizens is recorded annually: in 2021 – by 6%, this year – already by 10%.

It should be noted that this year the investigators of cases of crimes committed by foreigners and stateless persons presented 1,484 briefs on the elimination of the causes and conditions that contributed to the commission of the crimes.

Along with crimes against foreign citizens, the investigative authorities investigate criminal cases against officials who have committed crimes of corruption in the field of migratory relations.

In particular, IA Bastrykin noted the importance of disclosing facts of illegal receipt by immigrants of certificates of knowledge of the Russian language, including through bribery of officials.

“You need to pay attention to those people with whom a migrant arrives on the territory of the Russian Federation, with whom he lives, with whom he communicates, in what area he operates,” added the president of the CI of Russia.

Thus, 75 employees of the pertinent departments were held responsible for violations of immigration legislation.

Bastrykin also noted the shortcomings in the work of the heads of the investigative departments of the Investigative Committee of Russia in the Bryansk, Ivanovo and Ryazan regions, and emphasized “the inadmissibility of violating reasonable terms of criminal proceedings when investigating criminal cases of this category”.

After listening to the reports from his subordinates, the head of the Russian Investigative Committee, Alexander Bastrykin, gave a series of instructions to the department heads.

Share
Facebook
Twitter
Pinterest
WhatsApp
Previous article
The Russian military once again showed courage and bravery. The Russian Defense Ministry spoke about new exploits during the NWO – Rossiyskaya Gazeta
Next article
Telefónica completes the sale of 45% of its rural fiber network for 1,021 million