All roads lead to recession: the indicators that anticipate the crisis 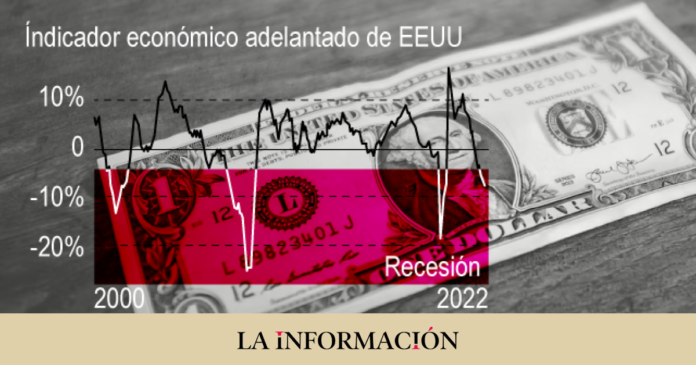 Anticipating the recession is what any economist looks for. Being in the pole position of those who “saw the crisis coming” is an arduous task. Time puts things in their place and, for the most part, failure in predictions is guaranteed. Now, it seems that the consensus is for a contraction of the United States economy of greater or lesser magnitude due to inflation and the increase in interest rates.

Investment banks such as Morgan Stanley, JP Morgan, or fund managers such as Fidelity or Allianz Global Investors are clear that curves are coming in the economy by 2023. And not only in large numbers and in the markets, but in the real economy, which ends up being reflected in the most feared: the increase in unemployment. But, what are the indicators that could anticipate a bad economic climate?

The dichotomy between the data (PMI surveys, ZEW vs. industrial production, retail sales) continues with some economies refusing to slow down despite the successive turbulence that most of them have experienced. This paradox is particularly evident in the United States and the Eurozone, but it can also be observed in most developed economies.

In fact, many indicators suggest a recession is on the way. The strong growth registered in 2021 and the beginning of 2022 will be due to a large extent to the large budget outlays of the different governments as a consequence of the Covid crisis. Although in 2022 there have also been significant expenses throughout Europe due to the energy crisis, they are lower maximums than those of previous years.

This is what we see in the European credit market, which shows the momentum of credit in the Eurozone, which has been negative for more than a year. “Given the time lag of fiscal policies (between 12 and 18 months), these effects should have a negative impact on growth in 2023. The scenario is the same, but less pronounced, in the United States,” says François Rimeu, strategist senior of La Francaise AM.

From the Conference Board to yield curves

The Conference Board publishes an indicator that takes into account the ten most reliable leading indicators for the United States (consumption, employment, etc.). Historical analysis shows that it is a reliable indicator to prevent recessions in the United States, since every time it is in negative territory for a prolonged period, sooner or later a recession occurs. According to this indicator, the recession will not be deep, however (it is still a possibility, however) and should occur in 2023.

However, the main leading indicator of recessions is centered on the yield curves of bonds of different tranches: 10, 5, and 2 years, for example. Under normal circumstances, short-term bonds must have lower returns than long-term ones. It is a confidence question.

The anomaly occurs when the profitability of short-term bonds exceeds those of long-term ones. This means that there is less investment demand for more far-reaching debt due to the lack of confidence in the economy in the future. For this reason, when this phenomenon occurs, which is known as “the inversion of the interest rate curve”, economic crises usually occur.

What is striking, in this sense, is that 75% of the yield curves are currently inverted. And, specifically, the 2-year and 10-year bond yield curve is at its highest inversion point since the 1980s, which presages to many economists that a sharp slowdown may occur in the coming year.

The real estate market is also a good reference to assess the health of an economy and the probability of a recession. “Broadly speaking, jobs derived from real estate activities represent around 14% of employment in the United States,” says Rimeu.

Furthermore, it is a market that adjusts very quickly when financial conditions change, as is the case today. With the sharp rise in mortgage rates in recent months, the real estate market has already begun to correct. “Logically, this has a huge impact on stakeholder confidence in this sector,” says the La Française expert.

Thus, when confidence falls, activity falls and unemployment rises. The number of registered unemployed, which currently stands at 226,000, could rise to more than 400,000 in 2023!” Rimeu warns. In short, the vast majority of leading indicators point to an extremely high risk of recession in Europe and the United States. “The timing is not clear, but currently it seems a very likely scenario,” concludes Rimeu.

Share
Facebook
Twitter
Pinterest
WhatsApp
Previous article
Chef’s recipes: How not to throw away the monthly budget on the New Year’s table and please your guests KXan 36 Daily News
Next article
Double pancreatitis: what destroys the pancreas faster than chips and alcohol KXan 36 Daily News