HomeLatest NewsAll the secrets of the only film shot in zero gravity: the...
Latest News

All the secrets of the only film shot in zero gravity: the plot and trailer for the film “Challenge” with Yulia Peresild 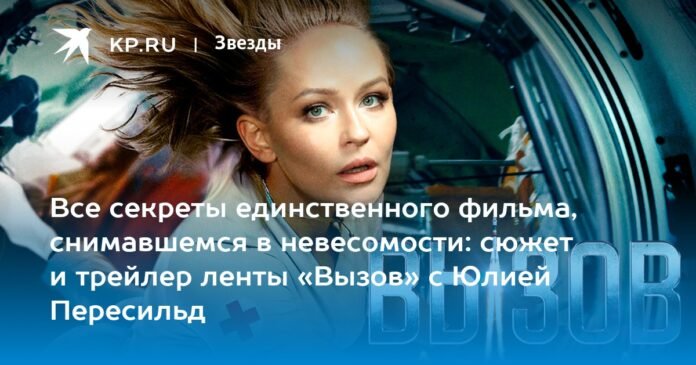 Poster of the film “The Challenge”: the heroine of Yulia Peresild is a surgeon, she goes to the ISS to perform a complex operation on an astronaut. Photo^ Channel One.

On New Year’s Eve, Channel One had two space premieres at once. First up: a song recorded aboard the International Space Station. Second: the trailer for the first feature film shot in space – The Challenge.

The main role in the film was played by actress Yulia Peresild. In the film, aboard the ISS, one day she will appear in an unexpected way for an astronaut: in a green evening dress. On it, he recorded a song for New Year’s Eve the First. Peresilda has excellent vocal abilities – she sang the song “Tenderness” by Alexandra Pakhmutova. Julia sang in a state of weightlessness 400 kilometers from Earth aboard the ISS. Cosmonaut Anton Shkaplerov as operator of the weightless clip.

WHAT IS THE MOVIE ABOUT?

Under the same conditions (in a state of weightlessness, 400 km from Earth), a part of the film “Challenge” was filmed on board the ISS. Premiere April 12, 2023. The trailer accompanies the tagline: “You’ve never seen this before. The world’s first film shot in space.” According to the plot of the film, the thoracic surgeon Zhenya (played by Peresild) is preparing for a space flight in a month and goes to the ISS to save the life of an astronaut. The cosmonaut has a serious injury and it is impossible to get him to Earth without surgery.

What do we see in the trailer? An emergency situation on board the ISS: “Satellite fragments are flying towards you! – We will carry out an evasive maneuver…” Hits are heard. Yulia Peresild’s heroine wakes up from the cough of a sick astronaut; she gets out of the “sleeping bag” (a soft toy flies out and hangs from there), moves around the ISS, wakes up people and gives orders: “Urgently to the service module!” Due to an emergency situation, the surgeon makes a decision: “I need to let people on the ground know that I am starting an operation …” In practice, there were no such cases: the heroine Peresild begins a surgical operation – the situation It is very difficult, the lung has tears… Upon receiving an order not to take risks, the surgeon assumes responsibility and performs a complex surgical intervention. At the same time, she gained the support of the chief curator of the Earth – Vladimir Mashkov plays him: he allows her to operate. Mashkov plays a doctor who, at the beginning of the film, chooses who flies to operate in space.

In New Year’s light, a musical number came out of space: Peresild sings “Tenderness”, and cosmonaut Anton Shkaplerov is filming. Photo: Channel One.

HOW DID YOU IMAGINE?

Last fall, after serious training by two non-professionals (actress Yulia Peresild and director Klim Shipenko), the Soyuz MS-19 manned spacecraft with a film crew went into orbit for the first time to shoot a feature film. They were delivered to the station by the ship’s commander, cosmonaut Anton Shkaplerov. For 12 days in orbit, 40 minutes of the film were shot, the rest of the film was completed on Earth in familiar conditions. Peresild put on makeup and handled the accessories: clothes, instruments for a medical operation. Shipenko filmed, worked on the sound, made backup copies of the material and sent them back to Earth, to check with the colored artist that all the technical points were kept up correctly. The actual astronauts also acted as characters in the image.

On the eve of the premiere of the trailer, in an interview with Channel One, the General Director of the Roscosmos State Corporation Yuri Borisov said: “During the filming of the film, for the first time, the technology of operational training of participants did not professionals in space flight was tested. At all stages of the Roscosmos enterprise, our specialized specialists supported the first team, expertly and informatively. The final stage of ground studies took place during the Soyuz MS-22 launch campaign in September 2022 at the Baikonur Cosmodrome. The Roskosmos team, together with the entire industry, is looking forward to the release of the movie “Challenge” and wishes the project good luck!”

Actress Yulia Peresild is looking forward to the premiere on April 12, 2023: “Everyone asks when their space movie will be released. Trust me, no one is waiting for it like we are. This is the fruit of three years of work, our love, a lot of strength, conquered fears, experiences, concerns not only mine, Klim and our entire team, but also our children and parents. Wait for the movie with us!

The filming was technically difficult: since it was difficult for the actress to move, you need to get used to it. There were also interesting moments from a technical point of view: every forty minutes it got dark on the ISS and then bright again. The sun plays with beautiful colors there. There will be a scene in the picture when the viewer can see it: the heroine Peresild is sitting in the porthole and talking with the Earth. At this moment, the Sun changes and a magical, cosmic lighting comes out.