HomeLatest NewsAn employee of the Russian Investigative Committee died in a hotel in...
Latest News 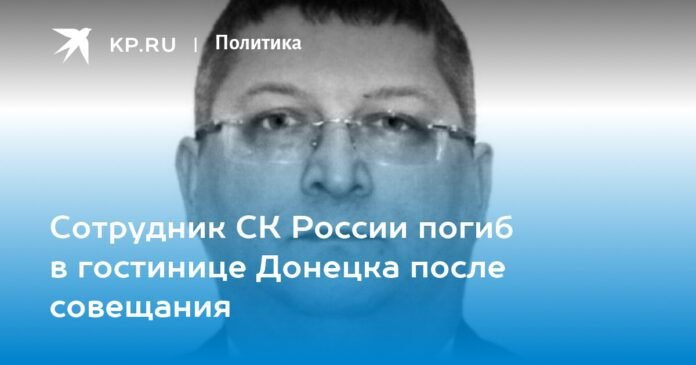 The bombardment took place during the night. He found Rybakov at the hotel.

For more than 300 days, the investigators of the Investigative Committee of Russia managed to avoid losses. They were often the first to arrive at the bombing site. They risked getting hit again, but they were lucky. They were lucky until December 30, when a Ukrainian shell killed the deputy head of the control and investigation department of the military investigation department of the Russian Investigative Committee for the United Group of Troops (Forces), Justice Lieutenant Colonel Yevgeny Aleksandrovich. Rybakov.

“Killed as a result of artillery shelling by the Ukrainian armed forces in Donetsk,” the official statement said.

The bombardment took place during the night. He met Rybakov at a hotel where he was resting after a meeting in Mariupol, which is 114 kilometers from Donetsk. At the meeting, Evgeny Alexandrovich, among other officers, briefed the head of the Russian Investigative Committee, Alexander Bastrykin, about the results of the Kyiv authorities’ war crimes investigation against Russian civilians and soldiers.

It was at this meeting that it became known that investigators from the Russian Investigative Committee discovered the bodies of more than 3,000 civilians at the positions of Ukrainian military personnel in Mariupol, who were shot while aiming weapons or using them as a “human shield.” ”. There were so many similar cases and testimonies that investigators had to put them on an electronic map, which now helps compare testimonies and reconstruct the facts minute by minute.

Bastrykin directed investigators to form a local DNA database of Mariupol residents to use DNA samples received from relatives to identify the bodies of the dead, which so far only have numbers.

During the meeting, new information about the participation of foreign mercenaries in the units of the armed formations of the Armed Forces of Ukraine was also announced. So, from the testimony of one of the prisoners it follows that in the unit of the 36th separate brigade of the Marines there were citizens of Great Britain. They have been serving in the Ukrainian Armed Forces since 2020, taking an active part in preparations for conducting combat operations in urban areas. In addition, Ukrainian military personnel were trained by instructors from Germany to storm buildings and shoot with foreign-made weapons. During the meeting, it was noted that information on the financing of mercenary activities on the territory of Ukraine is currently being established in detail.

After the meeting, the President of the Investigation Committee gave a series of instructions and detailed the deadlines for their implementation. Bastrykin also presented departmental awards to employees of various departments of the Russian Investigative Committee, highlighting the contribution of each to the common cause of investigating the crimes of the Kyiv regime.

After the meeting, the officers went to their places of work. According to Ukrainian telegram channels, Rybakov was attacked at the Victoria Hotel in Donetsk. Nationalists complain that after a series of “similar cases, business travelers from the Russian Federation prefer to settle not in hotels, but in apartments or in the private sector.”

However, the provocateurs do not agree here either: hotels are guarded, but in the private sector it is much easier and cheaper to organize an attack on a military man.

“Real professionals, the best officers of the Investigative Committee, serve in the Donbass. This is exactly what Evgeny Aleksandrovich was. He was repeatedly awarded medals and departmental honors. He performed official duties during the anti-terrorist operation in the North Caucasus region. He was a veteran of military operations and a veteran of military service, ”he commented on the loss in the UK, opening a criminal case for the death of a colleague.

The head of the Investigative Committee Alexander Bastrykin expressed condolences to the relatives of the deceased and instructed to provide support to his family.