And eat a fish, and…: Biden disgraced Zelensky immediately after negotiations in the United States 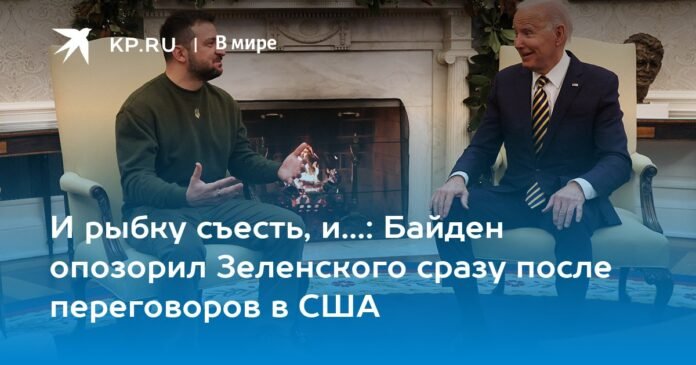 Western media were skeptical of Zelensky’s visit to Washington

As soon as the door was closed behind the guest, everything that the owner promised him had already begun to “dry” sharply. Something like this can be assessed by the visit of the President of Ukraine to Washington, based on the comments of the American press. The Washington Post: “Zelensky did not achieve the main goal – the promise of “more powerful weapons” to make a “serious offensive” in the new year, his positions did not quite coincide with Biden’s vision. Politico: “Several Republicans in the US Congress is not ready to commit to continuing financial assistance to Ukraine; there are concerns about whether the money will go for its intended purpose.”

Well, the intrigue with the passage of a $ 45 billion assistance package to Ukraine in Congress looks completely mocking. As soon as Biden thanked members of Congress for their bipartisan support for Ukraine during moving reception ceremonies for a beloved guest from Kyiv, there was outright “malice” in the Senate. As Bloomberg writes, just a few hours after Zelensky’s speech to the US Congress, adopted, as it should be in such cases, with fiery enthusiasm, US lawmakers, with a cunning feint of procedure, postponed the vote on this same package. Now they will return to it only in January, when the majority in the House of Representatives will already be with the Republicans. And those, as everyone remembers, threaten to review all spending in Ukraine, or at least significantly reduce it.

Zelensky flew abroad aboard the US Air Force for such humiliation? How could he expect such stinginess from the American “brothers” in awarding Biden the highest military award in Ukraine? No, judging by the photos and videos, everything is fine: with the President of the United States in the fireplace of the White House, on the podium of Congress with the insignia brought from the front, scorched by fire, all in the same Ascetic stressed khaki uniform, which he swore not to take off until victory… Where is the money?

Yes, $1.8 billion in additional aid has been promised and is likely to be released, including a highly token Patriot air defense system. But the top coveted military awards were “stitched” into the same $45 billion package that the Republicans so vilely dangled. Yes, Biden said the United States will support Ukraine “for as long as it takes.” But he did not specify: what is it needed for? Russian defeat? Likewise, The Washington Post writes, referring to Ivo Daalder, the former US envoy to NATO, that the US president still fears an escalation of the conflict and is concerned “not to go too far too fast”. How is it in Russian? Well, about the “fish to eat”…

A seemingly significant passage from Biden on Zelensky’s preparation for a “just world.” But the Ukrainian leader’s formula for this peace is well known: “you were not standing here”… Zelensky did not allow even a hint of progress towards a more realistic perception of reality. Still as hard as flint in his determination to defeat Russia first and then talk to her. That is, the negotiations must still be forgotten.

Although the Western press among the versions why Zelensky still flew abroad, they give one. British The Telegraph: Ukrainian President Volodymyr Zelensky’s visit to the United States indicates that some Western countries have begun to tire of the conflict in Ukraine, so Kyiv decided to intensify efforts to obtain foreign military aid. That is, it turns out that the visit is a “fireman” – to demonstrate to the weak in Europe, who have already slandered about the peace negotiations, the unshakable determination of the United States to support Kyiv to the last. You see, the example of Washington and its junior partners will inspire patience…

The general sense of Western evaluations of Zelensky’s visit to Biden can be summed up like this: a warm hug so that everyone believes that it is a marriage of love, and not of convenience.

Zelensky refused to die: the American owner stroked the President of Ukraine on the cross, but did not give him a bone

WP: Zelensky Couldn’t Get More Modern Weapons From US (more)

Share
Facebook
Twitter
Pinterest
WhatsApp
Previous article
The group “Kino” will present a new album “12_22” in Moscow and St. Petersburg KXan 36 Daily News
Next article
The trailer for the series “Fandorin. Azazel” based on the book by Boris Akunin