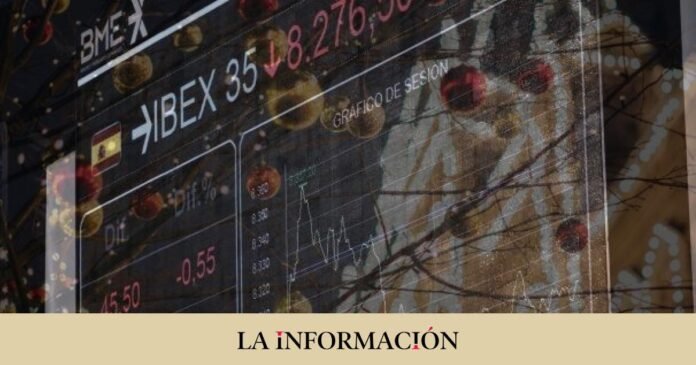 The Christmas spirit once again seizes the stock markets after two weeks of turbulence due to the latest meetings of the central banks. The Ibex 35, the Spanish stock market reference, has added its third rise and draws the expected Christmas rally that can turn the numbers for 2022 upside down. Is there time to change the negative sign to a positive one? What seemed like a miracle just a few days ago can become a reality during the next five sessions you have left of the exercise.

However, if it is within reach of the Spanish market, which is following in the wake of the Iberian PSI on the Lisbon Stock Exchange or the Ftse 100 in London. Both are already in positive territory in 2022 with increases of 3.5% and 1.5%, respectively. The magic level to know if the comeback is consummated is the 8,713 points at which the Ibex 35 closed on December 31, 2021.

The positive behavior of banks has offset the energy sector or telecommunications. Caixabank (8.3%), Bankinter (7%), Sabadell (6.3%), Santander (3%) and BBVA (+2.7%) have been pushing up the index over the last five days. Their weighting of 27% in the composition has put them at the wheel of the rise. In addition, the five banks in the index will receive a sector reinforcement next Tuesday 27 with the incorporation of Unicaja Banco to the indicator, which replaces Siemens Gamesa.

The tailwind in banking has to do with the scenario that the European Central Bank (ECB) has forecast for the coming months: higher interest rates -which are good for the banking business if they do not harm demand- together with a mild recession, according to Christine Lagarde. The rising interest rate cycle will have a positive impact on the entities’ net interest income. The rise of the Euribor alone will cause an impact of close to 15,000 million euros on income this year from mortgages referenced to this index, according to industry estimates.

UBS predicted almost a year ago that for every quarter point (25 basis points) rise in the interbank rate, revenues could grow by around 4%. The reality has multiplied by 14 the Swiss estimate. In recent days, the interbank barometer has risen to 3.17% in the 12-month term, the highest since 2008, and its rise of 366 basis points from the all-time low (-0.51%) in December 2021 .

All in all, the stage seems set for the Christmas rally to flourish on the stock markets. Even the Vix, the index that measures volatility in the S&P 500 and the buying of hedges against falls, is trading lower these days and is around 20 points. December usually accompanies the markets, according to stock market statistics, many investors tend to adjust their portfolios because the end of the year with the taking of new positions.

On Wall Street, for example, the Dow Jones rises 71% of Decembers with an average return of 1.4%. The technological Nasdaq Composite rose 61% of the time with a positive balance of 1.7% and the S&P 500 followed 73% with a result of +1.4%. In the case of the Spanish Stock Market, the numbers are also aligned. The Ibex 35 indicator has risen 70% of the time and adds an average yield of 1.12% over the last 30 years, according to figures compiled by ‘La Información’.