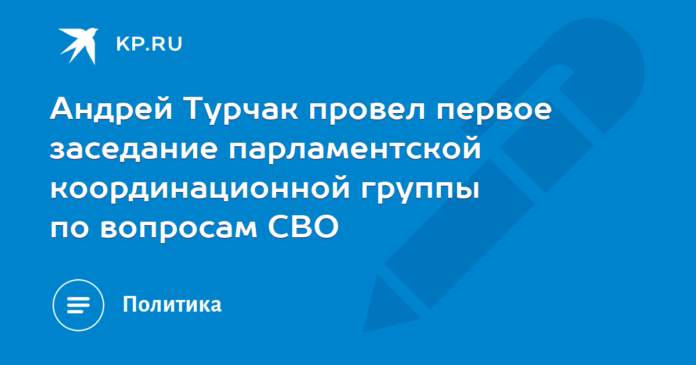 In the parliamentary coordination compound, they will also consider and finalize, together with the Ministry of Defense and sectoral departments, bills related to the issues of the Northern Military District, said the head of the group, secretary of the General Council of Russia. United, First Deputy Chairman of the Federation Council Andrey Turchak at the first meeting, in which Defense Minister Sergei Shoigu participated. And then they will be presented to the State Duma with the already consolidated position of all parliamentary parties.

REMOVING BARRIERS ON THE PATH TO VICTORY

“We have one goal: to identify and solve systemic problems related to the conduct of a special military operation. Elimination of any barrier on the way to our common Victory. Each member of the working group is in the NWO zone and knows these issues. We have been working on this for 10 months continuously. Consolidated opinion of all present: one of the key problems today is inertia. Some decisions, including legislative ones, come late. Therefore, the task force was formed to remove red tape and intermediaries as quickly as possible when making them,” said Andriy Turchak.

At the same time, the working group should not be regarded as a “complaint book”, Andrei Turchak emphasized. According to him, this is a tool to control the integrity and timeliness of payments to military personnel, equip fighters, support their relatives, all that is guaranteed by the State in accordance with the decisions made by the President.

“The group will undertake, among other things, to monitor the integrity and punctuality of payments, the accuracy of their accruals. We have already had a business trip to the Unified Settlement Center of the Ministry of Defense. We saw how the accumulations are made. Of course, there is a great demand for the digitization of this process, as well as the system of our military registration and enlistment offices. There are specific proposals in this regard, which we will present,” said Andriy Turchak.

He also pointed out that the group’s task is to ensure synergy for the prompt reception of problematic issues in the field, their discussion and specific management or legislative decision-making.

“Everyone is ready to work. Sergey Kuzhugetovich formulated in detail the expectations of the Ministry of Defense from the group, showed the deepest immersion in the agenda, including the problematic, and his readiness to solve these problems. We combine the efforts of the legislative and executive authorities, the Ministry. The involvement of the regions is very important, the work with the war correspondents, who were also part of the group. Such, let’s say, the axioms “The people and the army are united” and “Everything for the front, everything for Victory” were proved by all the participants at the first meeting of the group, “Andrei Turchak said after his results and noted that , having decided to create the group, the president gave all its members “highly reliable and entrusted with high responsibility.”

Earlier, by order of the president, a working group was created to ensure the interaction of public authorities and organizations on issues of training and mobilization of mobilization, social and legal protection of citizens of the Russian Federation participating in a special military operation and their families. , headed by the First Deputy Chairman of the Federation Council, Secretary of the General Council of United Russia Andrey Turchak.

The working group, which includes representatives of both houses of the federal parliament and all parliamentary parties, the Ministry of Defense, leaders of public organizations, prominent war correspondents, will constantly monitor the provision of mobilized citizens and a number of other issues related to the SVO.

Likewise, the tasks of the group include participation in information and explanation work on issues related to mobilization, training and mobilization, analysis of the state of work on patriotic education of youth and the elaboration of proposals on the production of products necessary to meet the needs of all types of troops and military formations.

Share
Facebook
Twitter
Pinterest
WhatsApp
Previous article
Plushenko fans are worried about his absence at the premiere of the KXan ice show 36 Daily News
Next article
The Euribor will close December at 3% after marking 3.288% in the daily rate