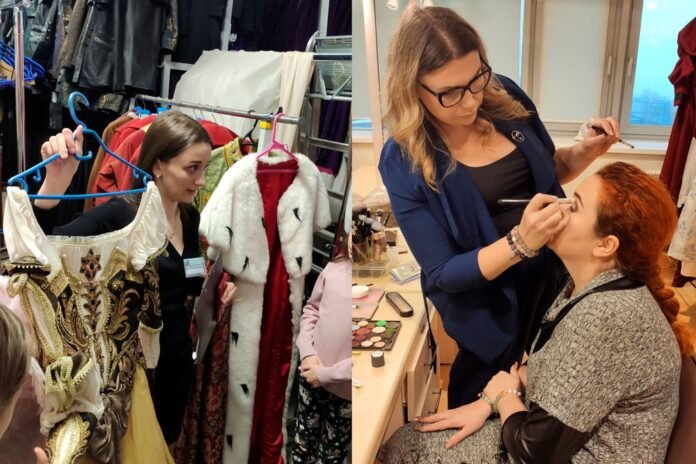 The first stop is next to the orchestra pit, which you can walk up and down. The mechanisms, rigid push rods, move silently at a speed of 0.2 meters per second.

– The moat can go down one level. This is required in certain performances, for example, in productions of Wagner operas, where the orchestra must sound thick and rich, without drowning out the soloists. Guide Veronika Shinkarenko shares the secrets of the theatrical backstage.

The journey from the entrance to the orchestra pit to the entrance to the stage takes several minutes. Through the maze of corridors, you can get into one of its “pockets”, left or right, 300 square meters each. The area of ​​​​the main stage is 462 “squares”, the rear stage (background) – another 284, in total – more than a thousand.

– Theatrical stages come in different sizes. Our great ones, there are few of them in Russia. In theory, we can accept any theater with any production, including thanks to modern machinery, says Nikita Kursov, head of the artistic and production department of the Primorsky branch of the Mariinsky Theater.

In the “pockets” there are platforms measuring 15 by 16 meters. If necessary, due to electromechanics, they can quickly move to the main stage tablet, which at this moment falls. They move directly with the landscape. They are specially installed at the right time, or, as the employees say, “charged”.

The courses explain two fundamental principles: the decoration must be visually effective and work effectively, that is, in such a way that it can be changed quickly. When the curtain closes, the stuntmen literally have a couple of minutes to change the scenery. Everyone knows what to do, and actions, like artists, are practiced at rehearsals. There are changes, as they say, on the open curtain. This is when the technical employees dress up in suits and bring, for example, extra chairs during the action.

To install picturesque planes, special fence lifts are used. There are 50 of them on the big stage of the theater – enough for almost every performance.

By the way, the stage is made in St. Petersburg and, if necessary, is brought from there to Vladivostok and Vladikavkaz, where another branch of the Mariinsky Theater is located. But if the audience really likes the performance and it repeats often, they can do an additional set.

The floor of the “pocket” is sealed in places with paper with the inscriptions “Mazepa”, “Queen of Spades”, “The Nutcracker”. These are markings for the location of light towers – stage lighting equipment. In total, more than 800 such devices are used here.

In the “pocket” of the stage, fake pistols and sabers are waiting for them, which will be used in the performance. Photo: Anna Bondarenko/RG

The director of the performance is responsible for ensuring that the stage changes on time, that the light hits the right spot, and that the performers appear in action at the right time. He works behind a special high-tech remote control.

– We have a production of the opera “The Lady of Spades” with the old school scenery. Looking at them and listening to the music of Tchaikovsky, sitting in the hall, you seem to be under one of the St. Petersburg arches. Even I, who am present on both sides of the stage, do not fully understand how this effect occurs. This is admirable, – admits Nikita Kursov.

Another place where tourists are taken in the Mariinsky Theater is the costume shop.

The robes of princes and kings, oriental and Russian beauties, heroes and villains hang in several rows on three-meter hangers. Each suit is personalized, made to measure for the interpreter of the role and is signed with his last name. In the Primorskaya Mariinsky Theater for less than ten years of its existence, eight thousand costumes have accumulated, in St. Petersburg there are already more than 80 thousand of them.

The guide offers to take a closer look at the skirts of the ballerinas.

– The first is a classic tutu. It has ten layers, and each next one is longer than the last. A hoop is sewn on the fifth, which fixes the bundle. Next is a multi-layered romantic choppenka, and finally a chiton – a short thin skirt based on an ancient tunic. Everything else is done on the basis of these skirts, says Veronica.

Ballet dancers’ costumes have different weights. For example, the prick of the prince from “Swan Lake” is almost weightless. And the king’s suit from the same ballet weighs several kilograms. The first has a very active role, the second barely dances. Such nuances are also taken into account when creating clothes.

Another piece of ballet wardrobe, covered in myths and legends, are pointe shoes. The toe cap of this shoe is hard, made up of several layers of burlap and calico according to the papier-mâché principle. In addition, the composition of the glue for each company is different and is kept secret.

– Our artists like Australian pointe shoes, their price is from 6,000 to 10,000 rubles a pair. For one performance, a dancer can change three or four pairs of pointe shoes, but this does not mean that all of them immediately become unusable. The ballerina’s leg sweats, the sock softens a bit, and she begins to hold her foot worse. Shoes can be dried and reused. And yet this is a consumable material, a couple is enough for about a month, the guide says.

It is here that the artists tune in to the performance and reincarnate in the image.

– Makeup can take about an hour or more. There are difficult roles, for example, we painted all the exposed areas of the body dark for the actors of the opera “Aida,” explains the make-up artist Oksana Tereshchenko.

She disproves the popular belief that theatrical makeup is applied in an exaggerated and crude way to make it stand out from afar.

– In fact, this is not true. Makeup is really brilliant, but you need to carefully work out all the little details so that the artist feels comfortable. After all, if an eyelash falls out at the wrong time, then the speaker can go astray, – notes Oksana.

Makeup artists and costume designers are present behind the scenes during performances to quickly fix makeup or hem a costume.

Together with them, another person will surely follow what is happening – stage master Vladimir Metlyaev. He has been working with actors for many years and is sure that a good opera singer must always fight for reincarnation. Vladimir calls his task the creation of a plastic image of the hero. The simplest example is when an actor’s movement is supported by his words.

– For example, the artist says: “I will own the world!” and he makes a cutting movement with his hand, as if confirming the intention. I always say: guys, if you feel goosebumps, then you made the right gesture, it connected with his voice. You believed yourself and the public believed you. This is the most important thing in the work, says an experienced master.