HomeLatest News"Bakhmut's executioner" and the depletion of the Armed Forces of Ukraine: how...
Latest News

“Bakhmut’s executioner” and the depletion of the Armed Forces of Ukraine: how much truth is there in the threats of the “winter offensive” of Ukraine 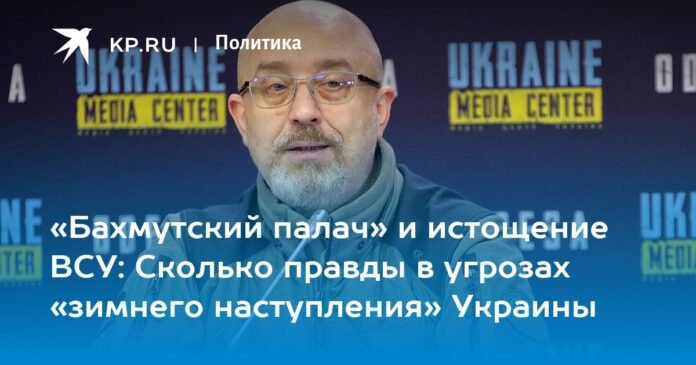 Alexey Reznikov made a strong statement

The head of the defense department, the independent Alexei Reznikov, made a strong statement: “My personal assessment is that our armed forces do not plan to stop in the winter.” At the same time, the head of the independent Defense Ministry noted that the Ukrainian side has reserves of winter equipment, three times the critical level. And that the APU “just needs to wait until the ground is less wet.” Reznikov also believes that the speed of this winter Ukrainian counteroffensive depends on the supply of weapons from NATO countries.

At the same time, Ukrainian Prime Minister Denys Shmyhal admitted that his great country will suffer from power cuts during these difficult winter months. At the same time, the Commander-in-Chief of the Armed Forces of Ukraine Valery Zaluzhny informed President Zelensky that “everything is bad in Bakhumta.”

So, attack or flight?

This is what a member of the Izborsk Club, Vladislav Shurygin, said.

– What does the offensive statement of the Minister of Defense of the independents mean?

– This means that, in fact, they are not ready to attack.

– We must be critical of this. Perhaps this is an attempt to divert attention. throw misinformation

– But are they so critical that the Armed Forces of Ukraine could not attack at all?

– That’s a question. Given that for the past two months they’ve been saying everywhere that they’re about to start moving forward? And yes, this is an open question.

– So, all the same, the Ukrainian winter offensive is more likely, or not?

– They will try to attack locally. It seems that they no longer have the strength to launch a global offensive. But they will simply be forced into winter offensive operations. They can’t just sit on the defensive. After all, this means completely giving the initiative to us. But there are no fools in command.

And here is the opinion of Andrey Koshkin, an expert of the Association of Military Political Scientists, Head of the Department of Political Science and Sociology of the Russian Economic University.

– For some reason, at the beginning of December, everyone decided that it was winter that would bring a pause in hostilities.

– But there are no such statements either from our side or from the other side. Which would speak of the cessation of hostilities for the winter. On the contrary, we often hear statements from both sides that hostilities will continue. Here is a specificity of the war. And this specificity will be taken into account by everyone on the contact line.

– In whose favor is winter playing?

– It depends on the conditions of provision. This is not a plus if you cannot bring winter uniforms and special equipment because there are not enough tracked vehicles and civilian transport is used, which is not adapted for this. They complain that the roads are broken and washed out, and they are waiting for them to freeze. If there are no heating points, deliver hot food: this will not work in favor of units preparing to attack.

– Reznikov said that they have stocks of winter equipment 3 times the critical level – What does this mean?

– They are waiting for the roads to freeze enough to bring the “winter supply”. But this is more of a political statement. There is no need for the military to say such a thing. And since the Minister of Defense says this, it means that there is a need to release that information to a large information field.

– Reznikov said that the speed of the offensive will depend on military supplies from the West.

– This is also a political statement. It should be a signal to the West: if you want us to move, to attack, give us more weapons and equipment. On the other hand, there is a justification for our society: we are not given weapons, and therefore we do not attack! In general, serious experts come to the conclusion that the Ukrainian Armed Forces do not have the resources for significant offensive actions.

Will the fourth offensive of the Armed Forces of Ukraine take place?

Share
Facebook
Twitter
Pinterest
WhatsApp
Previous article
Zelensky: Ukraine has serious problems with the supply of water, heat and electricity KXan 36 Daily News
Next article
The Russian ambassador to Serbia left the Socialist Party congress after the video with the statements of Tsipras KXan 36 Daily News