HomeLatest NewsBastrykin was instructed to form a local DNA database on the inhabitants...
Latest News 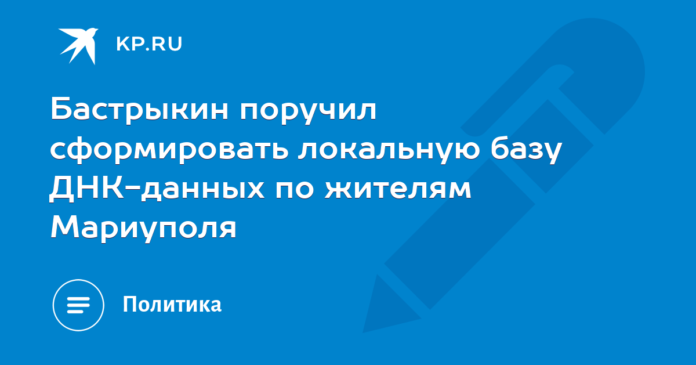 The Chairman of the Investigative Committee of Russia, Alexander Ivanovich Bastrykin, held an operational meeting of the headquarters for the investigation of crimes committed by Ukrainian formations against the civilian population and Russian military personnel in Mariupol. He talked with investigators working in Mariupol, studied the electronic map on which subordinates put testimonies.

“In the Main Investigative Department of the Investigative Committee of Russia, from the first days of the special military operation, work has been organized to analyze the testimony of witnesses, victims and detainees, as a result of which information is obtained about the established murder locations. and the discovery of civilian bodies is put on an electronic map,” the Russian Investigative Committee explained.

The department notes that during the preliminary investigation it turned out that officers of the 12 Brigade of the National Guard of Ukraine, which also included the Azov regiment (the organization’s activities are prohibited on the territory of the Russian Federation) created artificial obstacles to the evacuation of civilians from the city while destroying the city (caused damage to 176 billion rubles). Unable to leave the city and on the move in search of food, the civilians became a living target for the Ukrainian punishers who murdered them with various types of weapons. In April 2022 alone, the bodies of 51 civilians were found in the positions abandoned by the Ukrainian troops, and after the complete liberation and examination of the city, their number rose to more than 3,000.

The electronic map of the Investigative Committee of Russia clearly indicates the involvement of the Armed Forces of Ukraine in the executions of civilians, but does not allow to identify the identity of the victim. In this regard, Bastrykin proposed to organize work on the formation of a DNA database of those killed in Mariupol.

When the bodies are found, the experts will take the material and assign it a number. The discovery of the body will also be recorded on the map and compared with the testimonies of relatives and witnesses. Thus, Mariupol residents will have the opportunity to find out the fate of their loved ones listed as missing.

“In the case of requesting to the investigative bodies of the Investigative Committee of Russia by persons who have lost contact with relatives from Mariupol, it is considered appropriate to guide investigators not only to obtain information from them about the circumstances and time communication loss, but also biological material for comparative research. Together with the obtained data, the proposed DNA database will help to identify the victims and establish additional information about the crimes committed by the Armed Forces of Ukraine,” Bastrykin said.

He also instructed the Center for Forensic Expertise of the Russian Investigative Committee to form a local DNA database for Mariupol.

After listening to the reports of his subordinates, Bastrykin noted that holding the leaders of the Ukrainian armed formations criminally accountable should be based both on the testimony of Russian and Ukrainian military personnel and on the detailed establishment of the facts of deliberately criminal issuance. his orders to exterminate the civilian population and prisoners of war.

During the investigation, new information was obtained about the participation of foreign mercenaries in the units of the armed formations of Ukraine. So, from the testimony of one of the prisoners it follows that in the unit of the 36th separate brigade of the Marines there were citizens of Great Britain. They have been serving in the Ukrainian Armed Forces since 2020, taking an active part in preparations for conducting combat operations in urban areas. In addition, Ukrainian military personnel were trained by instructors from Germany to storm buildings and shoot with foreign-made weapons. During the meeting, it was noted that information on the financing of mercenary activities on the territory of Ukraine is currently being established in detail.

After the meeting, the President of the Investigation Committee gave a series of instructions and detailed the deadlines for their implementation. Bastrykin also presented departmental awards to employees of various departments of the Russian Investigative Committee, highlighting the contribution of each to the common cause of investigating the crimes of the Kyiv regime.

Share
Facebook
Twitter
Pinterest
WhatsApp
Previous article
Video: What is the situation in the Sochi mountains before the New Year? KXan 36 Daily News
Next article
Spanish households failed to save in the third quarter of the year