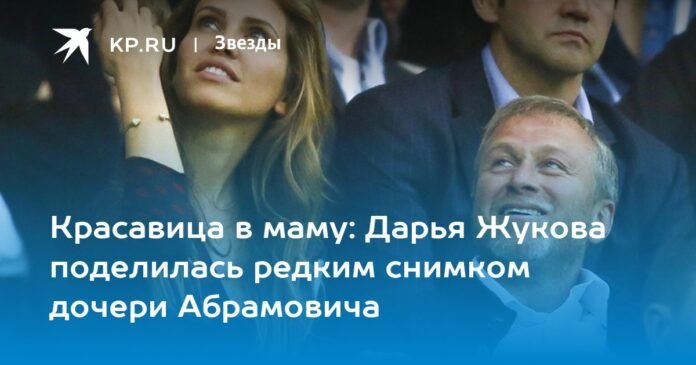 Daria Zhukova and Roman Abramovich divorced in 2017. Now the gallery owner is happily married to Greek billionaire Stavros Niarchos. Daria de Abramovich’s children live with her mother in New York. The ex-wife of the Russian billionaire almost never shows them on social networks. But on New Year’s Eve she made an exception and for the first time in several years she posted a photo of herself with her daughter Leah. The heiress of the former owner of Chelsea turned 9 years old.

Daria took a photo with her daughter during the New Year’s celebration in the company of Swarovski’s creative director, Giovanna Engelbert. According to the gallery owner’s subscribers, Leia is very similar to her mother, she has little of her father. The girl grows up a real beauty: dark hair, expressive eyes.

A year ago, in an interview with the Russian edition of Vogue magazine, Daria spoke about her methods of raising heirs. Like all modern kids, Leah and her 12-year-old brother Aaron are gadget crazy. They spend a lot of time on the Internet, which cannot but upset their mother. Therefore, Zhukova strictly limits the time her children spend on the Web.

– We have the following rule: on weekends for gadgets – 40 minutes. 20 to chat with friends, 20 for games. And in the week – depends on the success, – said Daria.

Although their mother is a world-famous museum expert, Abramovich’s children are not very fond of viewing exhibits. Despite the fact that Daria took them to the best museums and galleries in the world since they were little, they are still not particularly interested in art and history.

“They are not eager to go there, like most children,” says Dasha. – Sometimes they like it, sometimes you have to force it.

Zhukova and Abramovich began dating in 2007 and were soon married. In 2017 they divorced.

Daria married Stavros Niarchos in October 2019 and in March 2021 they had a son, Philip. The baby is named after her great-grandfather on her father’s side, who made a family fortune. Stavros is the heir to a shipbuilding company owned by the richest family in Greece, which, with his fortune, can compete with the Onassis. Abramovich’s former life partner managed to make friends with the entire Hollywood beau monde. His close friends include actresses Gwyneth Paltrow, Dakota Johnson and supermodel Karlie Kloss. In her early youth, Stavros met the famous party girl Paris Hilton and even became engaged to her.

Share
Facebook
Twitter
Pinterest
WhatsApp
Previous article
McCarthy defeated in the second round of voting in the election for Speaker of the House of Representatives KXan 36 Daily News
Next article
Gakpo: Gain or Gag? We understand why Liverpool signed the striker