HomeLatest NewsBefore his death, he managed to finish his requiem: The Last Dream...
Latest News

Before his death, he managed to finish his requiem: The Last Dream and the Last Appeal to God by Eduard Artemiev 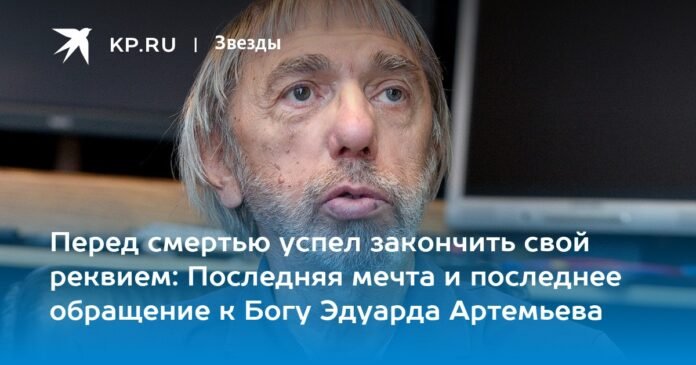 The composer Eduard Artemiev managed to finish his requiem before dying, which he wrote all his life.

Eduard Artemyev died. “The composer is as great as he is inconspicuous and modest,” Yefim Shifrin wrote about him. He was the creator of the “cosmic” music of Tarkovsky’s “Solaris”. Without Artemyev’s music, it is impossible to imagine the film hits of Nikita Mikhalkov, the famous theme of “At Home Among Strangers, Stranger Among Ourselves.” But, being a living classic, this man, who did not change over the years and seemed like a sad hippie, always knew how to steer the conversation about his own genius to one side. Blue-eyed, he told interviewers that the director enthused him with the blockbusters of Mikhalkov’s films, “he certainly has a psychic gift.”

In one of his last interviews, Arteev joked: “I came up with an epitaph. Here lies a man who always doubted himself in everything… But that’s not the point.”

The composer was born in Novosibirsk, where his Muscovite parents were passing through. Eduard was very young when his father was assigned to Ryazan and his parents felt it was better to leave his son in Moscow with his uncle. As Artemiev believed, it was his mother’s separation from him at an early age that caused the soulful note of his music.

His legacy is huge. He has written music for more than 200 films, 30 stage productions for theaters. For nearly three decades he worked on the rock opera “Crime and Punishment,” which he considered the pinnacle of his work.

He tried not to listen to his works again, for him it would be an ordeal. Music, like a notebook, kept the memory of the past a long time ago. And everything that he wrote was somehow connected with sad events. For example, the famous “Slave of Love” appeared when his son and his wife got into a terrible car accident and, running around hospitals during the day, the composer forgot about the night, working on soundtracks.

– An amazing person, Artemiev, – said Natalya Konchalovskaya. – He creates music that touches everyone…

By first education, Artemiev was a conductor. In his youth, he became interested in Zen Buddhism. He repeatedly experienced a mystical experience and authoritatively stated: “I am absolutely sure that such a world exists and the Lord does not create us to die.”

A month ago he turned 85 and a week later he was admitted to the hospital with 30% lung damage from complications of bacterial pneumonia.

On the eve of his birthday (and, as it turned out, before Artemiev left), the RTVI channel conducted a long interview with the composer. Then Artemyev admitted that he wanted to get away from creating music for films.

Plans and dreams were not destined to come true. But by a strange coincidence, shortly before leaving, Artemyev finished the requiem, which he began to write when he was a student under the impression of Stravinsky’s music …

At the end of the last interview, Eduard Nikolaevich once again repeated his favorite idea that for the layman music is the shortest path to God:

“Everything in the world is a wave and music is also waves, vibrations. If I, a composer, enter into resonance with something high, divine, it penetrates the soul of a person. There is a connection with the Creator”, he played. you and I. This is great happiness.”