HomeLatest News"Bikini Killer" is on the Loose Again: The Story of the Notorious...
Latest News

“Bikini Killer” is on the Loose Again: The Story of the Notorious Serial Killer and Master of Prison Escapes 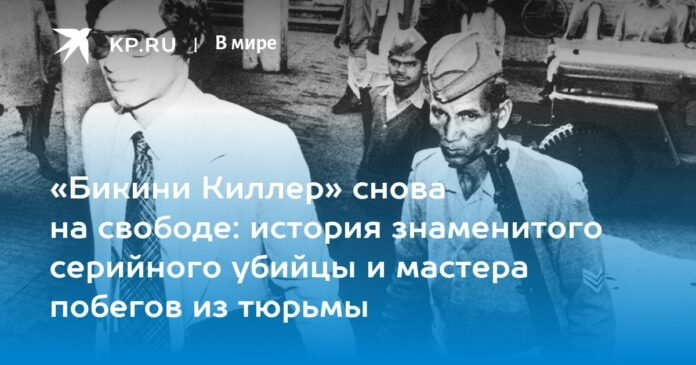 – Are you a dangerous person?

– The question, rather, should be about whether I committed the murders. But the courts decided that it was not so, – the Frenchman Charles Sobradzh answers the American journalist slowly, with theatrical pauses.

The interview was recorded in 1997 in France, where Sobraj felt safe. Did he know then that 25 years from now, already a gray-haired old man in a smart checkered cap, he would be back on French soil after 19 years in a Nepali prison? Who is he, a man slandered by everyone or a serial killer, on whose account of the death of more than 20 Europeans?

Initially, Sobraj was away from Charles, but Gurmuk. She was born in Vietnamese Saigon to a local saleswoman and an Indian businessman. The parents divorced when the boy was still young, after which the mother got along with a French officer who adopted Gurmuk. For many years the family traveled between Vietnam and France.

Sobraj’s criminal inclinations manifested in adolescence. In 1963, he was jailed for robbery. But the first prison term only provoked the guy. After his release, he continued to engage in fraud and robbery. Not even a meeting with a young Parisian Chantal Companion changed anything in his soul. Even on his wedding day, the police arrested Charles for trying to escape in a stolen car. And Chantal, enchanted by the chosen one, was by his side until the end.

In 1970, together with his pregnant wife, Sobraj moved to Asia to hide there from another arrest.

LIFE IN THE RUN

In Asia, Charles changed widely: he organized the resale of stolen cars, exchanged stolen jewelry. But in 1973, he was arrested in Bombay and sent to jail for a failed attempt to rob a jewelry store. Chantal helped him escape from prison, while Charles himself faked an attack of appendicitis.

The couple went to Kabul, where Sobraj took charge of the robbery. His victims were tourists who were traveling along the Hippie Route. But even here a couple was soon arrested. True, not for long. Sobraj again pretended to be sick and, having pumped the hospital guard with medicines, he fled.

To get along and gain the trust of his victims, Sobraj would often pose as a jewelry or drug dealer. Most often, he resorted to the classic scheme: in order to help the victim, he suddenly found himself in a difficult situation. He helped the French Yannick and Jacques to return the passports, which he himself stole. Another Frenchman, Dominic Rennello, was taken in by Charles when he fell ill with dysentery, although it was actually Sobraj who poisoned his victim.

The first victim was an American Teresa Knowlton. Her body in a bikini was found in the Gulf of Thailand. It took the police several months to establish that Teresa’s death was not an accident, but a murder. The next victim was the Jew Vitali Hakim. His charred body was found near Pattaya. Then a terrible fate befell the Dutch students Henk Bintanja and Cornelia Hemker. To gain her loyalty, Sobraj poisoned the couple and then healed them. But when Vitali Hakim’s girlfriend, Sharmain Carra, came to Charles’ house to investigate the disappearance of a friend, the killer, fearing discovery, decided to get rid of the Dutch. And after some time, the body of Carra herself was found, drowned in a bright bikini on the beach.

THE INVESTIGATION IS DIRECTED BY A DIPLOMATIC

The killings continued in Nepal, where Sobraj went with his new girlfriend, Canadian Marie-André Leclerc. Here, Laurent Carriera from Canada and Connie Bronzich from the US became their victims.

Every time he cracked down on his victims, the “Bikini Killer” (Thai investigators gave Sobraj this nickname, another – “Snake” he received for being a master of disguise and escape) would take their documents and used during travels. It was the accidentally discovered foreign passports that made Sobraj’s close associates suspicious of the murders.

Having moved to India, the killer decided to acquire new accomplices and managed to charm two European women. Together they asked for a tour group of French students as guides. During the trip, Sobraj gave the French drugs, saying they were dysentery pills. However, the substances did not affect everyone in the same way, and as some of the students lay unconscious, another twisted Sobraj and called the police.

In prison, the criminal’s accomplices quickly parted ways. He and he insisted on his innocence and organized a circus of court sessions, firing lawyers or going on hunger strike. As a result, the court sentenced Sobraj to 12 years in prison. Thanks to the fact that he managed to smuggle precious stones into the prison, the killer led a luxurious life behind bars: a TV, a cozy cell, delicious food, interviews with journalists. He spoke openly about the murders he had committed, but did not directly admit to them. He justified his antisocial behavior as a response to Western imperialism in Asia.

At the end of his term, Sobraj was threatened with extradition to Thailand, where he was wanted, followed by trial and death. Therefore, in 1986, the criminal threw a big party for his cellmates and security. He treated the convoy to a drugged cake, and he himself once again escaped from prison. They quickly arrested him and extended his sentence for another 10 years. In 1997, Sobraj was released from prison as a free man: the Thai arrest warrant for his name expired, so he went to France.

Sobraj repeatedly filed petitions for review of the sentence, but they were denied. However, on December 22, a Nepalese court ordered Sobraj’s early release due to his advanced age and good behavior.

“I HAVE TO CONJUGATE”

While living in Paris, Sobraj gave interviews and even demanded $15 million for the rights to a film based on his life. In 2003, he was seen at a casino in Kathmandu. A few days later, the Nepalese police arrested the Frenchman and charged him with a double murder. The court sentenced Sobraj to 20 years in prison. Much of the investigative material was collected by the diplomat Knippenberg and Interpol.

During his imprisonment, Sobraj continued to shock the public: he called for the intervention of French President Sarkozy, arranged a prison wedding by marrying a Nepalese resident, accused judges of racism and corruption, and his ex-wife Chantal filed a lawsuit against France. . with the ECtHR for refusing to help Charles.

Sobraj repeatedly filed petitions for review of the sentence, but they were denied. However, on December 22, a Nepalese court ordered Sobraj’s early release due to his advanced age and good behavior. In addition, she has already served more than 75% of her sentence. The judges also took into account that the prisoner has a heart problem and needs another operation. Sobraj’s lawyers called the court’s decision bold and unexpected.

– I have a lot to do. I have to sue many people, including the state of Nepal, Sobraj told reporters without elaborating.

Share
Facebook
Twitter
Pinterest
WhatsApp
Previous article
2022 results: the best new seasons of Russian TV series according to Kinocracy. Part 1 – Russian newspaper
Next article
Economists revise the rise in GDP to 4.4% in 2022 after the INE review