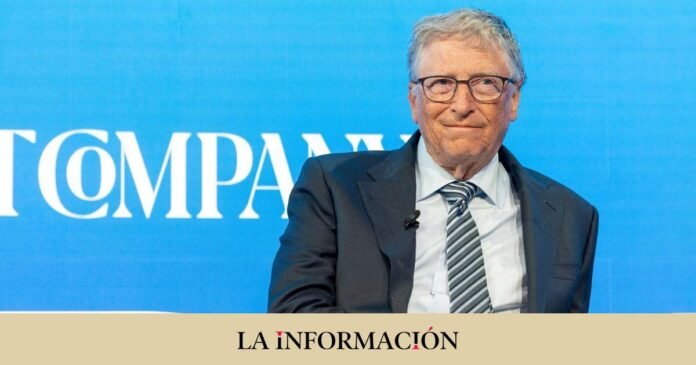 There are only a few days left until 2023 starts and there are many who are encouraged to forecast what will happen in the new year. One of them has been the very same American tycoon and founder of Microsoft, Bill Gates, who predicts a complicated future in the short term in a context marked by war in one of the last summits of ‘Forbes’ magazine in which he participated and in the article you published a few days ago on your blog.

Bill and Melinda Gates. “Five complicated years are ahead because we have debts from the pandemic, the war in Ukraine and the economic cycle is changing,” she laments.

The tycoon also refers to the political situation in the United States, a matter with which he is especially pessimistic and disappointed. “We are going to have difficult elections and a civil war. I have no experience in those issues, I am not going to divert my money into that because I would not know how to manage it. Political polarization can end everything,” he warns.

It is not the first time that the Microsoft co-founder -he left the board of directors in 2020- predicts what will happen in the world in the coming years. In fact, in 1987 he already announced that the 21st century would be full of flat screens. But he is not always right: he said that, in 2007, credit cards would disappear in favor of cash, and this has not been the case.

The American alludes, in turn, to the future of the Gates Foundation -which fights to eradicate child poverty in the world- and estimates that, within 25 years, its work will come to an end. “That’s probably the length of time that Melinda and I will be around to help make sure everything stays on track,” he says, pledging to raise the level of spending.

As it could not be different, the businessman mentions in his article the fight against climate change. Gates argues that the response of today’s leaders will affect future generations. Hence, I consider that the solution to this issue involves the elimination of global greenhouse gas emissions by 2050. A dramatically worse world,” he guarantees. However, he is optimistic about the increase in investment in decarbonization technologies, believing that “we are much further along than I would have predicted a few years ago in getting companies to invest in zero-carbon advances.”

Gates’ predictions for 2022 that have not come true

At the end of 2021, Gates wrote an article on his blog in which he made five predictions about 2022, whose epicenter was, above all, the pandemic and the direction that some technology companies would take in the next two to five years. But he only got two of them right: the worst of the health crisis would end in 2022 and this would be the year of the ‘new normal’, although many challenges from the pandemic continue.

Gates was convinced that meetings in the metaverse would be common within two or three years, which he believed would transform the way meetings are conducted. At the moment, the metaverse is not yet a reality, nor is it for people to have robust diagnostic capabilities at home thanks to new technologies, as many of the apps and sensors that would make this possible are still missing.

Similarly, a blood test capable of detecting Alzheimer’s disease has not been approved either, despite the fact that he is very optimistic about medical advances and assures that it was “quite likely that it would be approved in 2022.”