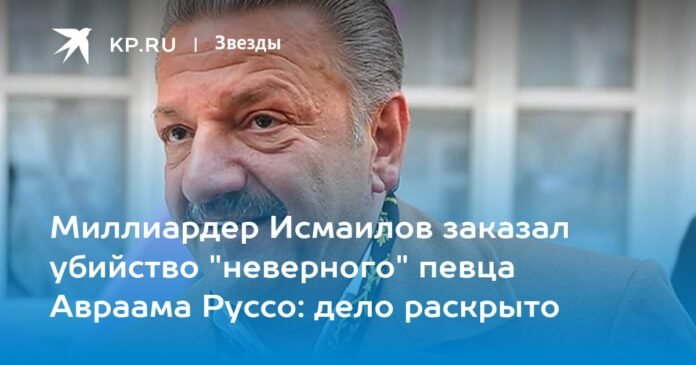 Telman Ismailov is a billionaire, owner of Cherkizon, the largest market in Russia.

The Khamovnichesky court delivered a verdict in a high-profile case of an attempt on the life of singer Abraham Russo. It’s a long time – 2006 was in the yard! But the verdict has just come in now. Recall that in August 2006, the singer’s car, which he was driving home from a concert, was literally riddled with a Kalashnikov assault rifle. Bullets struck Russo in the back, thigh, and lower leg. But the doctors managed to save him. After the assassination attempt, the artist fled from Russia to the United States and did not appear in Moscow for several years.

Even then, there were rumors that the former philanthropist of the singer Telman Ismailov, a billionaire, the owner of Russia’s largest market Cherkizon, was behind the attack, and he handed out black money every day in some crazy amounts … It was Ismailov , who was called the “godfather” Rousseau. They told a story: a businessman, while on vacation in Cyprus, noticed a restaurant singer (born in Syria) with a strong voice, brought him to Russia, asked for help with the promotion of the famous producer Iosif Prigogine and invested a lot. money. money on this project. Rousseau really became a star (“I won’t give you anyone”, “Far, far away”, “Once – and you are in a white dress”).

But at some point he refused to renew the contract with his boss. This, apparently, brought Ismailov out of himself.

According to investigators, three people were hired to eliminate the arrogant singer: Ismailov instructed his bodyguard to find the right people. Vitaly Dzhura and Alexei Tryasnikov were supposed to monitor Abraham Russo’s movements and inform the killer, Mikhail Demkin. After several days of preparation, the attempt was made. But, as we now know, the singer survived.

Dzhura and Tryasnikov were detained only after Telman Ismailov himself fled from Russia. (Demkin died in 2014 in a colony while serving a sentence for another crime – Ed.). After the closure of Cherkizon, things did not go well for the businessman, he went bankrupt and ended up hiding from Russian justice in Montenegro. The Balkan country has not issued it yet.

The jury tried the case and a few weeks ago found the two guilty under the article “assistance in attempted murder.” Today the Khamovnichesky court pronounced its verdict.

“The court sentenced Dzhura to 9 years in prison, Tryasnikov to 12 years in prison. Both will serve their sentences in a strict correctional colony, the press service of the Moscow Prosecutor’s Office reported. “The investigation of the criminal case against the organizer of the crime Ismailov, who is on the international wanted list, and other accomplices continues.”

Avraam Russo’s lawyers filed a lawsuit demanding payment of 5 million rubles as moral compensation. The court satisfied him only partially: Dzhura and Tryasnikov will have to compensate the singer for 1 million.