HomeLatest NewsBiography of Ruslan Khasbulatov, the last Chairman of the Supreme Soviet of...
Latest News

Biography of Ruslan Khasbulatov, the last Chairman of the Supreme Soviet of the RSFSR 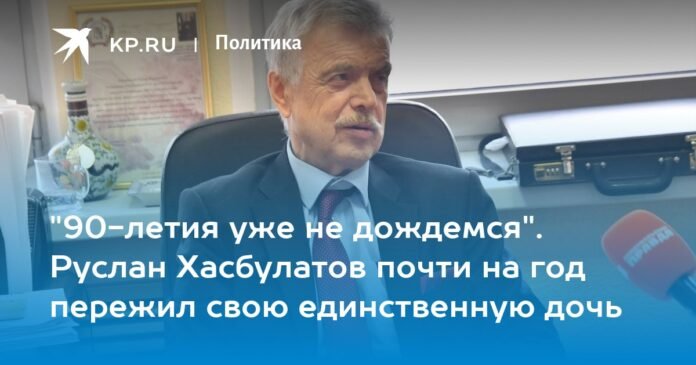 I was the only journalist with whom the former president agreed to meet on the eve of the anniversary.

Photojournalist Vladimir Velengurin and I visited him at the Plekhanov Russian University of Economics, where he headed the Department of World Economics, on the morning of November 17.

Khasbulatov, at the beginning of the conversation, explained to us the reason for his imprisonment:

… – You know, – he said directly, as they say, in the first words of his interview (I quote this fragment from the transcript). – After all, in recent months, especially after the death of my daughter, I stopped giving interviews. Up, up, up… But I couldn’t turn you down.

– I’m sorry, but I just, yes, I couldn’t help but take (interview). Because your 90th birthday will be waiting another ten years, I joked.

– Oh, we will not wait, – Ruslan Imranovich said sadly.

Khasbulatov himself did not approve of the interview: his assistant read it to him over the phone before publication.

Then he called me back: “Ruslan Imranovich asks to remove the phrase about his daughter from the text, I will also have to yell at her from the audio version.” (And I prepared a program for the 80th anniversary of the former broadcaster and for Radio Komsomolskaya Pravda)

Khasbulatov’s only daughter, 47-year-old Selima, died on January 5, 2022 in one of the Moscow hospitals, where she was hospitalized with covid, she died after two and a half months of artificial coma.

After this happened, I tried twice to interview Ruslan Imranovich on the phone. But he refused: “You don’t know, I buried my daughter …”

It was an unhealed wound for him, until his death.

I had the impression that Khasbulatov was not a deeply religious person. But… he loosened his beard -he told me himself- just during the covid. This coincided with his Selima’s illness.

And why Ruslan Imranovich, as he himself said, could not refuse me an interview? Perhaps because in October 1993, just before the White House execution, I snuck into his office and did a sensational interview for Komsomolskaya Pravda; He later dedicated the “Journalist” chapter to me in his two-volume book “The Great October Tragedy.” ”, Who he wrote in Lefortovo.

And, all these years, we talked to him, not that often, but noticeably. Once he even came to our editorial office, at Radio KP, in a royal top hat and with a smoking pipe.

How my hero lived all these years after imprisonment, how successful he was in economic science… You can learn about this from my November interview with him, which we published right there, in memory of Ruslan Imranovich.

What else surprised me and what was not included in my posts?

In his reception room on Plekhanovka, Khasbulatov’s books and textbooks lay in high piles. And in the office there was a line of students for autographs.

… I will miss my hero very much.

Ruslan Khasbulatov will be buried in the Chechen Republic, where he has come frequently in recent years.

Ruslan Khasbulatov was born in 1942 in Grozny.

On September 21, 1993, Russian President Boris Yeltsin signed a constitutional reform decree and dissolved the Supreme Soviet and the Congress of People’s Deputies. In response, Khasbulatov called a meeting of the presidium and announced the termination of Yeltsin’s powers as interim president. The President of Russia was approved by Vice President Alexander Rutskoi.

Early in the morning of October 4, the “White House” (the building of the Russian Parliament), by order of Yeltsin, was fired upon from tanks.

Khasbulatov, Rutskoy and others were arrested and detained in the Lefortovo pre-trial detention center. They were accused of “organizing mass riots”, but in February 1994 they were released thanks to an amnesty from the State Duma.

Soon Khasbulatov became the head of the world economics department of the Russian Academy (University) named after Plekhanov.

Share
Facebook
Twitter
Pinterest
WhatsApp
Previous article
The new US ambassador to Russia, Lynn Tracy, will arrive in Moscow in the coming days
Next article
Ronaldo outwitted everyone. Could move to Newcastle if they qualify for the Champions League