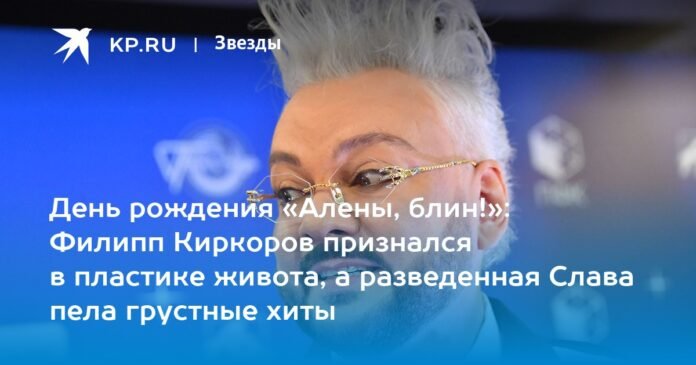 The star of the author’s show “Alena, damn it!” gathered at the Moscow karaoke Happy almost the entire beau monde pop.

Her friends and interviewees came to congratulate Alena Zhigalova on her birthday. Many, speaking warm words to the birthday girl, noted not only her professionalism, but also her perseverance. Like, this is the story of a modern day Cinderella: a girl from a small town came to the capital, and thanks to her hard work and skill, she became a star.

-I remember Alena when she was still very young, when I came on tour to her native Vologda. She and her friend gave me some cute photo collages. To be honest, for the first time I see that a girl from a simple family has reached such heights that now Philip Kirkorov and other stars congratulate her, – Stas Kostyushkin told the guests.

Philip Kirkorov, mentioned above, by the way, came to Alena one of the first. The King of Pop gave the birthday girl a huge TV.

You are our Oprah. I’m proud of you. And I am pleased that I have become that same inspirer, that guiding star for you. We have known each other for 28 years. And I am glad that today your big dream came true, – noted Philip Kirkorov congratulating Alena Zhigalova.

The artist outshone everyone this evening not only in new fashionable outfits, but also in a stylish uniform.

As it turned out, the doctor gave Philip the perfect press, having once corrected the ways of the blogger Dava.

– The cubes of my press, of course, are slightly less than those of Dava, but nonetheless. But thanks to Timur, I am in very good shape,” Kirkorov shared. “The easiest way is to tell the truth. Today it is simply indecent not to have your own plastic surgeon, psychologist, trainer. I am Timur’s best creation. The best creation of him.

There is nothing to be ashamed of. America is not shy. Celine Dion recently revealed on social media that she had stopped singing because she had a very serious illness.

Or there the artists come out and say they have a disease. This is good. It is not normal that we are trying to hide everything. Well, whoever hides, remains on his conscience. We have nothing to hide with Timur. Dava advised me, I went, did it, – said Philip Kirkorov.

And then, together with the hero of the occasion, he sang his favorite song – “Atlantis”.

Appeared at the festival and disappeared from Ani Lorak’s radar. The artist is in very good shape and she says that she has many surprises in store for her fans. Lorak spent the evening at the table with DJ Katya Guseva and TV presenter Lera Kudryavtseva.

Of course, almost all the artists, congratulating Alena, sang. After all, the party was blaring at karaoke. Here, the recently divorced Slava reprized Asti’s dismal hits, though she admitted that she didn’t remember the words to her songs. The young stars of TO-MA and Guzel Khasanova showed new tracks, and Bianca sang time-tested action movies. And even Lera Kudryavtseva first showed her vocal talent when performing Anastasia’s suffering song “String”.

Well, at the end of the evening, the waiters brought out a huge cake from the French confectioner Dmitry Duran, which was crowned with a matryoshka doll with the face of Alena Zhigalova. The birthday girl offered the first piece to Philip Kirkorov, but the artist refused dessert.

“Not yet, while I am recovering from the operation,” shared the king of the scene.