HomeLatest NewsBlack caviar, pancakes and the beach: this is how the stars celebrated...
Latest News

Black caviar, pancakes and the beach: this is how the stars celebrated the New Year 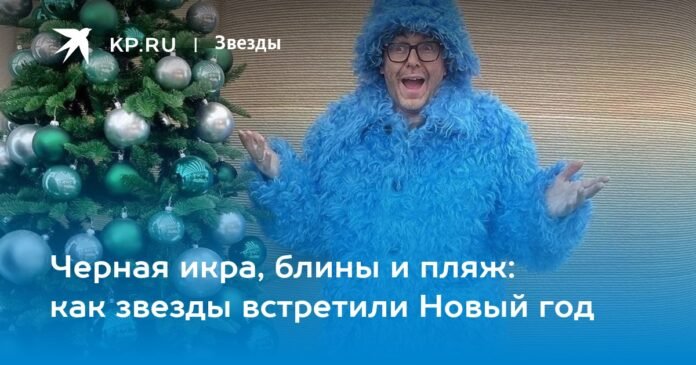 Andrey Malakhov met in the family circle under the “light”.

The stars, together with the whole country on January 1, eat salads and jam after New Year’s Eve. Most of the stars spend the holidays at home, but some have gone to warmer climes. We will tell you how the stars greeted the New Year.

Philip Kirkorov with pancakes in the yard.

Philip Kirkorov celebrated at home with children, family, team. The singer said, “We have folk festivals with pancakes. We celebrate the New Year in our estate with guests, with the family. Today there is only one star. All the other stars are from different directions: households, management, electricity … ”There were festivities both in the yard and in the house – a huge plasma screen was installed in the living room. On New Year’s Eve, Father Frost and the Snow Maiden came to visit Kirkorov’s son and daughter.

Santa Claus and the Snow Maiden came to congratulate the Kirkorov children.

Yulia Baranovskaya with her children Artem, Yana and Arseniy went to the Crocus for a vacation; tables were set up there for the guests. The entertainment program was for both children and adults: Leonid Agutin, Zivert, Grigory Leps and other performers sang.

Yulia Baranovskaya celebrated with her children at Crocus.

Grigory Leps managed to perform in two venues in the evening. And before that, with the eldest daughter Inga, according to the family tradition, go to the Bolshoi Theater to see The Nutcracker.

Grigory Leps and his daughter Inga managed to catch the Nutcracker before work night.

Ksenia Sobchak with her son Plato and her husband Konstantin Bogomolov celebrated at home, on TV. They were visiting a family of friends Raskovalovs – Yana and Vadim. The family watched, judging by social networks, Channel One: they started with Irony of Fate, ended with the New Year’s concert Twenty Years Later.

Ksenia Sobchak photographed her husband and son on TV with “Irony of Fate”.

On the table: jam, hot and cold appetizers, black caviar on avocado, empanadas, Russian salad and a couple of other salads. Sobchak noted the delivery of the restaurant, that is, the food came to the mansion already ready.

Festive table of the family of Ksenia Sobchak.

Garik Kharlamov photographed his mother Natalya Igorevna and his girlfriend Katerina Kovalchuk near their Christmas tree. The actress Kovalchuk published this image on her social networks. I wonder where Christina Asmus celebrated: on another floor of the house or at her boyfriend’s house?

Garik Kharlamov photographed his mother and girlfriend at their Christmas tree

Andrey Malakhov celebrated the holiday with his family – with his wife and son. The TV presenter shared his plans for the holidays: “Sasha’s son has a vacation, which means that we need to arrange a whole “kindergarten” at home – whales, sharks and owls are our best friends! As for the games, I plan to review cartoons and listen to as many nursery rhymes as possible.

Andrei Malakhov prepared his favorite toys for his son.

Natalya Podolskaya with her husband and children celebrated the New Year and approached it responsibly: she also read poems to Santa Claus. Previously, she Podolskaya was cunning: she lit the bells for the children earlier in order to put them to bed on time. This year we all look forward to the real New Year together. After that, the children went to bed, and Podolskaya and Presnyakov visited friends.

Anastasia Ivleeva and her friend flew to New York for the holidays. The blogger and TV presenter celebrated the New Year both in Moscow time and locally. Ivleeva rented an apartment in Brooklyn and drew up a plan of walks and excursions for the next few days. Anastasia has a clear plan for the new year: “I dedicate 2023 to self-love!”

Ivleeva in New York on vacation.

Ksenia Borodina celebrated with her daughters and a group of friends in a Thai restaurant. Blogger and TV presenter Borodina rents a villa with its own access to the beach and relaxes in expensive restaurants. Gifts for children and friends Ksenia brought to Moscow and presented after the chimes of the clock.

Ksenia Borodina celebrates in Thailand, with children and friends.

Dzhigan and Oksana Samoilova celebrate in Dubai, where they rented a villa. The rapper and the businesswoman have four children: they ordered animation for them. Santa Claus and the Grinch, who stole Christmas, sailed to the family’s house on the water and played on the beach. Then the children received expensive gifts: iPhones, bracelets, toys.

Samoilova and Dzhigan with children in the United Arab Emirates. Everyone received bathing suits with photos of relatives as gifts.

“I fell asleep at a performance in New York”: Yuri Kuklachev told how he drank on the New Year in the 70s