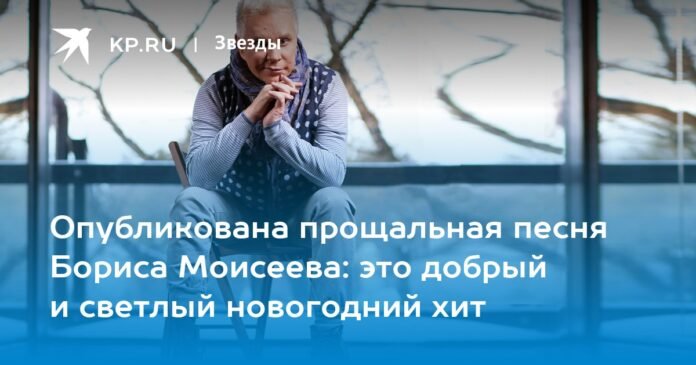 Boris Moiseev passed away in September this year after a third stroke. The artist has many unreleased songs and duets with colleagues.

On December 16, the premiere of Boris Moiseev’s song “In this New Year” took place on all music platforms. Honored Artist of the Russian Federation (singer, choreographer and dancer) Boris Moiseev passed away on September 27, 2022 in his Moscow apartment after a third stroke. Now songs are being prepared for release, which the artist recorded in different years. Interest in the songs of Boris Moiseev has grown; this often happens after the death of popular artists. What we will hear, what creative evenings we will see – KP.RU was told: Sergey Gorokh (director and friend of Boris Moiseev) and Alexei Malakhov (author of the song “This New Year”).

– Now Boris Moiseev’s song “This New Year” can be heard on music platforms. And how did you record this song in the studio with Boris?

Alexey Malakhov: – The most pleasant and warm memories are associated with the song “On this New Year.” Once Borya told me, in his velvety voice: “Dear Alexei, do you have a song about the New Year? Be kind, melodic and about love. At that time I was wintering in Thailand, and the lines immediately came to mind: “I just want to love you, this New Year, I just want to hug you, this New Year.” Simple, sincere and warm! Boris immediately liked the song, and I was glad that such an artist as Boris Mikhailovich performed one of my songs. Boris Mikhailovich himself recorded the song at the Vi-Sound studio in Moscow in October 2012. An interesting young team was assembled – Anastasia Mukhina and Alexei Konoplev. We have already worked together: each time preparing performances for the New Wave. Therefore, the recording took place at once in a very warm and friendly atmosphere.

– Tell us how Boris Moiseev met the new year 2022. How did you celebrate?

Sergei Gorokh: – Probably the most desired New Year’s celebration for Boris was time on stage, at performances. His favorite phrase: “Old age will not find me at home: I am on the road, I am on the road.” So it was. New Year’s Eve has always been a work day for all of us (the team). Overnight we were able to drive to five sites. And everywhere Boris was greeted with triumph. For him, this was the main gift – demand and attention from the public. Well, we always found the chimes at home or in a hotel if we were in another city. Boris raised a glass of wine, exchanged gifts and already went to the performances on New Year’s Eve.

– It often happens that interest in the artist’s work soars after his death. Did this happen with the songs of Boris Moiseev? If so, how is this interest manifested?

Sergei Gorokh: – It cannot be said that right now interest in creativity has increased dramatically. Boris has always been a sought after artist. Until that fateful moment in 2010 (we’re talking about the first hit-editor’s note), he could give up to three hundred concerts a year. There is no city in Russia where he is not expected. And everywhere they sold out. Yes, and abroad Boris was loved and loved. Baltic States, Central Asia, Europe, America. That’s probably why we’ve never dealt with the distribution of digital copies of his songs. And now, when the request has become bigger than ever, the team and I find solace in this. We are working with record labels to distribute previously released albums and prepare new singles for release. For example, on Memorial Day in November, we released his latest studio album, I Can’t Lose You, which could become the best-selling album of 2022.

Sergey Gorokh: – You can listen to streaming for free. But the physical media are also available in the markets. The single “In This New Year” is available on all digital platforms worldwide. You can say: “Hello Alice, put” This New Year “by Boris Moiseev and listen to the song.

– Does Boris Moiseev have unreleased songs? What launches will you prepare? What will be released in 2023?

Sergei Gorokh: – The creative heritage is huge. And we’re preparing a number of new releases, including previously unreleased songs. Among which there will be sensational duets. This is a great job. And in these works, Boris stays with us.

– Do you plan to make a museum in Boris Moiseev’s apartment?

Sergei Gorokh: – Of course, the idea is not new. This is the first thing that came to my mind today. But it must be a responsible approach. Huge heritage, artifacts, costumes, gifts from friends and fans. All this is carefully preserved. I really want this museum to appear. But what it will be, time will tell. You see, making a museum in a residential building is difficult. People traffic can disturb residents. Similar museums exist, including in Russia. And the most striking example is the museum-apartment of Lyudmila Markovna Gurchenko. But the experience of such museums also shows a series of difficulties. I dream that a large museum of famous artists, artists, artists will appear in Moscow. And let it be a large set, divided into spaces, each of which is a recreation of a workshop, dressing room or apartment. Where the atmosphere of the life of a legend is reproduced, where anyone can come. Also, we will continue cooperation with Alexander Vasiliev. He has several exhibits in his collection, which Boris handed over during his lifetime. Alexander travels all over the world with his exhibitions.

– Many famous artists were friends of Boris Moiseev. Are you planning a creative evening in 2023? If so, which of the stars will definitely be invited?

Sergey Gorokh: – In 2024 there will be a big show for Boris’s seventieth birthday. God bless you! Many of his own friends came up with such an initiative. And let’s start this project from his small homeland – Belarus, in the “Slavianski Bazaar”. And in the fall of 2024, I hope to do a show in Moscow.

Where to listen to Boris Moiseev’s song “In This New Year”: on all music platforms and with the help of the voice assistant “Alisa” and “Marusya”.

Scandal with the New Year’s comedy “Self-Irony of Fate.” What’s going on? (plus)