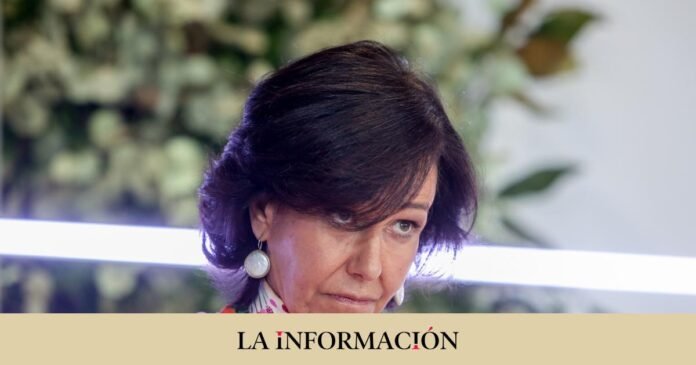 It was after the summer of 2020, at the worst of the pandemic in terms of economic uncertainty, when the banks bottomed out on the stock market. The lack of visibility regarding a solution to the Covid-19 crisis led them to trade at record lows. Banco Santander came to move at 1.4 euros per share, a level below the 2008 crisis, that of 2002 and which in terms of capitalization meant returning to what it was worth with the peseta.

In September 2020, Ana Botín resorted to financial derivatives -which leverage investment- to send a message of confidence to the market about the evolution of the bank on the stock market. A few weeks later, the announcement of the Pfizer vaccine raised hopes about the end of the pandemic and a future return to normality. The Ibex 35 obtained the biggest monthly rally in its history with the boost, among others, from the Santander share.

Specifically, the president of the entity contracted ‘call’ type purchase options on 3.5 million shares only exercisable at the end of the contract. Botín has now settled in cash in the two maturities of June and December with million-dollar capital gains, which it will use to continue buying Santander shares on the stock market as it does regularly, according to sources close to the entity. Ana Botín directly controls about 0.2% of the bank’s capital, which is worth around 95 million euros on the stock market.

The options themselves have an intrinsic value that is quoted daily depending on what the underlying does, in this case, Santander. The communication to the CNMV of Cronje, Botín’s patrimonial company, specifies these options were of the European type that they exercise only at expiration. It is not an instrument available to any investor because it is non-negotiable bilateral OTC (Over the Counter) derivatives, as explained to ‘La Información’ by one of the designers of this type of instrument.

The operation is divided into two tranches. The exercise price was 2 euros per title for 1.35 million options that were settled on December 16 in the quadruple witch hour period. The other package of 2.1 million options was converted with the reference date of June 17 at a price of 2.1 euros, although the supervisor has now been notified.

The one-to-one parity settlement was made in cash, that is, without Botín having bought the 3.5 million Santander shares. The bank’s price has experienced a revaluation of 35% and 28%, respectively, between the contract price and the stock market price. A differential of 0.7 and 0.6 euros that represents a gross profit of 2.25 million euros for Botín in the total operation.

The rapid revaluation of the bank on the stock market in the months after the contracting of this derivative structure has invited Botín to repeat the movement and has replicated this investment position. In December 2021, it bought 2.16 million options with the same type with a reference price of 3.25 euros per title that will be exercised in December 2023. Last April it did so again with another 1.3 million European options with a reference price for Santander at maturity of 3 euros.

If Santander trades above that level, it will once again collect million-dollar capital gains from the operation. On the other hand, if the price of the bank’s shares falls below, it will lose the amount invested in the premiums or the price of these options. At the end of 2020, Cronje declared an investment of €1.8 million at fair value in the two instruments that have now been converted, although the price of each option was not specified. The position you are holding open is now costing more than it was in 2020.

Operating with financial derivatives is not new to the Botín clan. The president followed in the footsteps of her brother Javier Botín, who groups under her command the shares of various family members who signed a syndication agreement and which leads him to control just over 1.1% of the bank. There are 180 million titles with a current stock market value of 500 million euros.

In May 2020, the president of JB Capital Markets and director of Santander opened a large bet with financial derivatives on 20 million bank securities, equivalent to 0.12% of its capital. The type of instruments used is the same as in the case of his sister Ana: European call options exercisable only at expiration and of the OTC type, that is, bilateral between the client and his broker without being listed on the stock market.

In this case, the expiration of the options is December 2023 and the exercise price is 3.4 euros per share. It is still 21% above Santander’s current stock market price but at the time the options were purchased the differential was over 71% because the bank was trading below 2 euros and it dropped even further to around the 140 cents.

Javier Botín’s movement was more than aggressive: his options were completely ‘out of the money’, that is, his investment would be worth zero in the event of exercise because the underlying traded well below the reference price marked in the contract. Two and a half years later they still are. Santander came to trade above the level of 3.4 euros between January and February of this year, although since then it has returned to trading down to 2.81 euros at which it closed on the stock market on Thursday. There are still twelve months to know if its derivatives will come to fruition like those of the president.