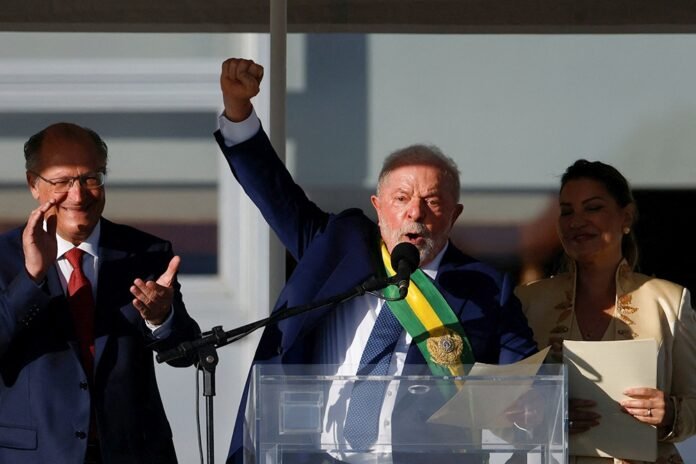 Lula takes office for the third time after “preventing” the re-election of far-right incumbent Bolsonaro. Da Silva’s re-election marks the culmination of a political comeback that has excited supporters and angered opponents in a highly polarized Brazil, according to the Associated Press.

Tears in front of thousands of supporters

Holding back tears, addressing tens of thousands of supporters dressed in the red of Lula’s Workers’ Party and filling the square in front of the presidential palace in the capital Brasilia, he announced the end of “one of the worst periods in the history of Brazil ” under The far-right ex-president. “It was an era of darkness, uncertainty and much suffering… but this nightmare is over,” Lula said, vowing to reunite the deeply divided South American country and govern not just those who elected him in October’s “historic elections” but everyone. 215 million Brazilians, notes The Guardian. “Nobody cares that our country is constantly in ferment. There are not two Brazilians. We are one people,” said Lula, who urged citizens to restore friendships destroyed by years of hatred and lies.

The 77-year-old leftist veteran, a former factory worker who already served as Brazil’s president from 2003 to 2010, was emotional in his speech as he laid out plans to combat hunger, which he called “the worst crime committed against the Brazilian people.” “. “Women are scavenging to feed their children. Entire families sleep outdoors, exposed to cold, rain and fear,” said Brazil’s newly elected leader.

At the same time, Lula did not name his right-wing predecessor by name. But he has lashed out at the damage caused by Bolsonaro’s four years of rule, during which nearly 700,000 Brazilians have died in large part due to authorities’ misdiagnosis of the coronavirus outbreak, millions have plunged into poverty and deforestation. of the Amazon has skyrocketed. . It should be noted that on the eve of the inauguration of the new president, Bolsonaro, 67, who took his defeat very hard, went on vacation to a mansion in Florida. On the way, according to the US media, he was going to visit his idol Donald Trump, who spoke extremely badly of Lula. Thus, the previous head of state violated the Brazilian tradition of passing the presidential belt – a symbol of power – to the next head of state. Judging by all the alignments, for Bolsonaro not only the path to return to power is closed, but also for Brazil itself for his own safety. At least in the near future.

“No amnesty” for Bolsonaro

“No to amnesty! No to amnesty!” the crowd roared as they discussed the reign of Bolsonaro, the world famous “covid dissident” whom many in Brazil want to prosecute for sabotaging efforts to contain COVID-19. and vaccinate against the disease. he called “a bit of the flu.” “Bolsonaro killed my son. He was 20 when he died,” said one of the men in the crowd, Valdeshir da Costa, hands shaking with anger as he held up a photo of his late heir on his phone. “I want you to. pay for everything he did.”

Addressing Congress shortly after being sworn in on Sunday afternoon, Lula said the “criminal behavior of a negative and obscurantist government that has been insensitive to people’s lives” during the pandemic must not go unpunished.

Lula walked up the ramp to the palace, accompanied by eight members of Brazil’s diverse community, including one of the most revered indigenous leaders, Raoni Metuktire, a rap DJ, metal maker and a 10-year-old boy.

Vivi Reis, a left-wing politician from the Amazon, burst into tears when she saw Lula appear. “After so many tragedies and a government that plunged Brazil into poverty and hunger, we now see that we have overcome it. We are here, we resisted and we won,” she told the British publication.

From prison to the political Olympus

Huge crowds of enthusiastic Lula supporters took to the streets of the Brazilian capital to celebrate the sensational political renaissance of a man who languished in prison just over three years ago on politically motivated corruption charges that were later dropped by the country’s prosecutors.

“We feel dizzyingly unfathomable relief,” journalist Arimathea Lafayette, 59, said as red-clad crowds marched on the congressional building on Sunday morning to commemorate the return of Lula and the fall of Bolsonaro. “We survived four years of terror and now we feel free,” added Lafayette, who flew in from the northeastern state of Alagoas wearing a T-shirt with Lula’s face on it.

Lula’s American biographer, John French, said he believed that after declaring war on hunger, the hallmark of Lula’s first government, the new president’s top priority would be to reunite the deeply divided nation.

Yet the very prospect of a new beginning under Lula’s progressive and inclusive government, which has vowed to combat environmental crime and appointed an indigenous woman to head Brazil’s first indigenous affairs ministry, excited thousands of his supporters who came to Brasília.

Political analysts estimate that Lula’s presidency is unlikely to be like his previous two terms, as he follows the toughest presidential race in more than three decades in Brazil and opposition to his entry by some opponents fueled by ambitions. and provocative statements by Bolsonaro. For months, Bolsonaro has been casting doubt on the objectivity of electronic voting in Brazil, and his loyal supporters were unwilling to accept defeat. His staunchest supporters resorted to what some officials and new members of the Lula administration called acts of “terrorism,” raising security concerns on inauguration day.

Lula will have to face more difficult economic problems than in the first two terms, when the global commodity boom was a windfall for Brazil. At the time, his administration’s flagship welfare program helped turn tens of millions of impoverished people into the middle class. He left office with a personal approval rating of 83 percent.

Over the years, the Brazilian economy has plunged into two deep recessions: first under the government of his chosen successor and then during the pandemic, when ordinary Brazilians were hit hard, AP experts say. Lula said that fighting poverty and investing in education and health are his priorities. He also made it clear that he would stop illegal logging in the Amazon. Finally, Lula obtained the support of moderate political forces to form a broad political front to defeat Bolsonaro, and later recruited some of them to be part of his cabinet.