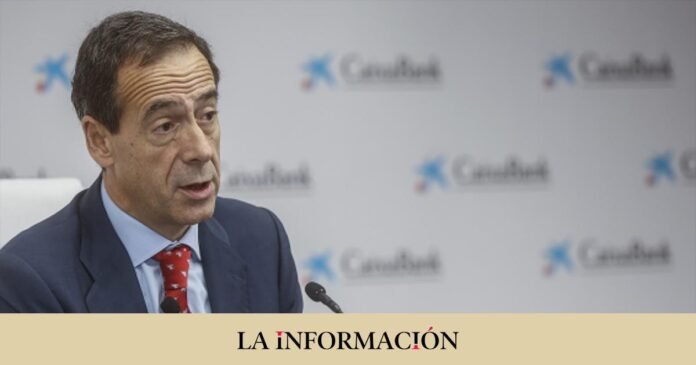 The rise in the Euribor will give a boost to Caixabank’s strategic plan for the next three years, which was threatened by the pressure of increased costs. In May of this year, the entity presented its guides for the next three years in which it proposed a curve for the index to which most mortgages in Spain are referenced at 1.5-1.6%, but its estimates have fallen short with the strong growth of the Euribor in recent months, which gives the bank an additional cushion to reach its ROTE commitment (return on tangible equity, which measures profitability) of 12%.

In this sense, it should not be forgotten that the mortgage indicator is on track to close the year at 3%, “which will have a positive impact on the mortgage portfolio” use sources from the entity, which, however, rule out for the moment, a formal review of the plan due to the current high volatility and uncertainty. However, the Euribor jump will be worth it to cover the interest margin, the bank tax and the cost of risk, say market sources. “The evolution of interest rates is enough for Caixabank, in this case, to meet these objectives,” says Marisa Mazo, an analyst at GVC Gaesco. The experts consulted by La Información clarify that “it will comply with the plan, but in a different way from what was initially thought.”

And in this sense, Caixabank held a meeting with investment banks at the beginning of December, in which “they recognized a double-digit increase in interest margin” although they did not modify their guides for the next financial year, some of the attendees explain. All in all, Nuria Álvarez, an analyst at Renta 4, calculates that the improvement in the interest margin for 2023 will be 22% (the market places it at 25%), while Mazo estimates an increase of 22.7% This represents a significant jump , since in the presentation of the strategic plan in May an improvement to low digits was calculated.

This improvement would be enough on its own to more than offset the fall in the interest margin that is expected for 2024 due to the drop in rates and the increase in the cost of deposits that will occur gradually, analysts say. “In 2024 it will be difficult for Caixabank to see the interest margin grow,” explains Álvarez. The forecasts are that they remain stable with an increase of 2%. However, the calculations of the experts suppose an improvement of one percentage point, up to 9%, the forecasts of the entity that stand at 8%.

If, on the income side, the evolution of the Euribor is a catalyst, inflation will put pressure on operating expenses, which they expected to close 2024 at around 6,000 million euros, “but it will be difficult to meet due to the effect of rising prices and all administrative expenses, renewal contracts, etc. ”, adds Álvarez. In addition, a salary review is still pending, which could be in line with the one approved by the bank employers’ association AEB, of 4.5%, although the large entities, BBVA, Banco Sabadell and Banco Santander have introduced improvements.

In fact, during the presentation with analysts, the entity admitted “greater pressure on costs, both from personnel and from opex.” Despite this, it maintains the efficiency ratio guideline of the plan, which contemplated placing it below the level of 48% in 2024 thanks to the anticipated advance in revenue. However, the market calculates it at two more points (50.5%).

In relation to salary costs, it must not be forgotten that CECA is the employer’s association in which Caixabank is included and that everything points to the fact that the talks with the unions will be tough, since in the CECA agreement, the workers who were under it They have a large number of social benefits, which they will try to maintain, while the employers will seek to ensure that the cost of wages does not skyrocket.

“We must not forget that an upward revision of 4.5% (as approved not only by the AEB, but also by the rural banks) was not contemplated in any strategic plan,” insists Álvarez Y, although inflation moderates in the medium term, negotiations will start in 2023 with inflation still high. Until September, Caixabank’s operating expenses rose 3.7%

Cost of risk at 35 basis points

All in all, despite the rise in the Euribor, the cost of risk will remain anchored at 35 basis points, according to analysts’ calculations, which would be in line with the entity’s objective, since they do not expect a significant impact from the agreement reached with the Government on the measures for those with mortgages, where the credits that adhere will be classified as stage 2 (credit under special surveillance). Likewise, it must not be forgotten that it still has 1,100 million euros of unused covid provisions.

And this impact of the Euribor on Caixabank’s net interest income is reflected in the evolution of the share. Since the start of the year, its titles are among the second that have risen the most within the Ibex, with a revaluation that beats 50%.

Share
Facebook
Twitter
Pinterest
WhatsApp
Previous article
Eduard Uspensky: “I wonder why there is paper for publishing Brezhnev’s books, but not for my books.”
Next article
French politician Filippo called on the “EU mafia” to follow Hungary’s lead on the Ukraine issue KXan 36 Daily News