HomeLatest NewsCall the hurricane "Vovchik": an unprecedented "winter storm" hit the US after...
Latest News

Call the hurricane “Vovchik”: an unprecedented “winter storm” hit the US after Zelensky’s departure 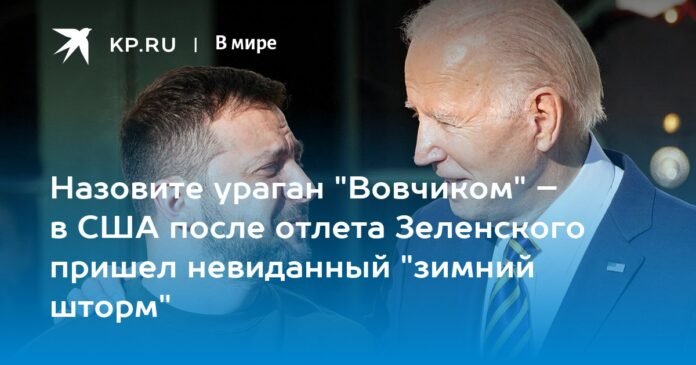 While Zelensky was in the United States, the weather behaved normally and everything went smoothly. But as soon as he left, it all started…

In the USA, SANTA CLAUS HAS A REHEARSAL FOR THE APOCALYPSE

In the United States of America, a nightmare and horror – a blizzard combined with severe cooling, which in such an ensemble occurs no more than once every 40-50 years. The wind in New York knocks people over, blows away fragile structures and covers them with snow. Many federal highways are closed due to traffic accidents and snow. In Ohio, more than 50 cars crashed in just one of them. The “winter storm” has already killed more than 20 people. Some just froze on the streets of cities, as they like to show in disaster movies.

More than 15,000 flights have been canceled and further delayed. And this is all literally on Christmas Eve, when millions of Americans are used to flying for the Christmas holidays. Bruce Willis couldn’t have saved his wife and taken the airport back from the terrorists. And young Kevin would not have been left alone at home, because his parents would not have flown anywhere, and after a couple of hours they would have come home. They probably couldn’t even get from his house to the airport. The “winter storm” affected New York, Tennessee and two dozen other states. More than a million and a half consumers were left without electricity,

In the United States of America, a nightmare and horror – a blizzard combined with severe cooling, which in such an ensemble occurs no more than once every 40-50 years.

More than 200 million Americans have been affected by extreme winter weather, but their hardships could get even worse. A powerful blizzard was accompanied by a sharp drop in temperature in just one day. Temperatures dipped to -45 degrees Celsius in some states. In western Canada, the thermometer dropped even lower, to minus 53 degrees.

Americans get a kind of less-than-merry Christmas without these “jingle bells” and the tili-bom ringing of reindeer team bells from a tolerant version of Santa Claus.

Millions of Americans are now sitting by their fireplaces, fiddling with unused airline tickets and reading tickets, silently swallowing tears invisible to the world, silently asking: “For what?” And things could get even worse if the current “winter storm” becomes a “bomb cyclone” when temperatures drop further, winds pick up, and rainfall increases.

And we can answer them with a single word, both describing the causes of real disasters, and predicting them, but in the future. And this word is Zelensky. He flew home, but the Evil he brought attacked America.

On April 12, 2019, at the invitation of the President of France, Zelensky visited Paris.

ZDOROVENKI BULS, WE ARE UKRAINE, YOU “BLACK LABEL”

While Zelensky was in the United States, the weather behaved normally and everything went smoothly. But as soon as he left, it all started…

On April 12, 2019, at the invitation of the head of France, Zelensky, when he was still a presidential candidate, visited Paris. And just 3 days after departure, the most important historical and religious monument in the French capital, the Notre Dame Cathedral, caught fire. So far they have not been able to restore it.

After Zelensky’s visit to Erdogan, Turkey was deeply shaken by an earthquake

After Zelensky’s visit to Erdogan, Turkey was deeply shaken by an earthquake, and Germany, as soon as the Ukrainian president left, was covered by a flood. And nearly wiped out entire lands. Along with Belgium and half of the Netherlands.

Even Japan has reached Zelensky’s karma. After the arrival of the Zelensky couple for the enthronement of the Emperor of Japan, typhoons of unprecedented strength hit the country. And in the Indonesian capital, as soon as the authorities invited Zelensky to the G20 summit, the dome of Jakarta’s main mosque caught fire and collapsed. After that, Indonesia, having learned its lesson, decided not to insist on the face-to-face presence of the Ukrainian president at the summit. And the summit passed without unnecessary misfortunes or natural disasters.

Even Japan has reached Zelensky’s karma. After the arrival of the Zelensky couple for the enthronement of the Emperor of Japan, typhoons of unprecedented strength hit the country.

Even in his native Ukraine, after Zelensky’s arrival in Odessa, the local beaches were flooded with shit.

And Joseph Biden couldn’t help but know all this when he invited Zelensky to Washington. But amnesia or thirst for money turned out to be stronger. And the president of the United States, who had been sick with covid after a date with Olena Zelenskaya, decided to take a bigger risk.

But others were less fortunate.

The “Zelensky victims” account was opened by the Sultan of Oman Qaboos bin Said. Zelensky flew to Oman on January 2 to celebrate the start of the new 2020, but after journalists learned of his arrival, he turned his vacation into a business trip, even meeting the Sultan in alleged business negotiations, the theme and details. which remained unknown. After the meeting with Zelensky, the sultan fell ill and died a few days after the meeting on January 10. But 50 years before that, he quietly ruled Oman.

The “Zelensky victims” account was opened by the Sultan of Oman Qaboos bin Said.

Japanese Prime Minister Shinzo Abe joyfully shook hands with the President of Ukraine in October 2019. He then withdrew, after a while deciding to come back. But he did not take into account the “Zelensky factor”. In July 2022, he was shot dead at a campaign street rally by a retired Japanese Navy sailor, who had no intention of killing Abe.

In July 2022, Abe was shot dead by a retired Japanese Navy sailor (in background) at a campaign street rally.

But the president of Guatemala, Alejandro Giammattei, managed to get out. On July 25, he came to Kyiv for a visit, met with a Ukrainian colleague, made a commitment and expressed all kinds of support. But even before the end of July, as soon as Alejandro returned to his country, his caravan was shot at by unknown persons. Although the president himself was unharmed, several of his security guards were injured.

However, not all meetings and close relations with Zelensky ended so unfavorably. And old Pelosi still has a chance to stay alive. Everything can end with the prospect of criminal cases, as it now seems, for example, for the head of the European Commission Ursula von der Leyen, the Federal Chancellor of the Federal Republic of Germany Olaf Scholz, the head of Eurodiplomacy Josep Borrell, the El Prime Minister of the Czech Republic, Andrey Babich. Or the usual resignations, such as those of Boris Johnson, Liz Truss, the Bulgarian Prime Minister (now with the prefix ex-) Kiril Petkov, the former Italian Prime Minister Mario Draghi, and all of Angela Merkel herself, who since the first negotiations with Zelensky in every meeting with him now embraces the uncontrollable tremor of the organism.

However, not all meetings and close relations with Zelensky ended so unfavorably. And old Pelosi still has a chance to stay alive.

Remember, so remember. As soon as Trump, when he was president, met Zelensky, as a fyut, he had to say goodbye to his presidency immediately.

“Friend of Zelensky” is actually a sentence. But Western politicians may not believe this. And ignore the “black karma” of Zelensky. And fall one after another, like pins in a bowling alley, knocked down by the crushing hand of Zelensky, who knows no mistakes.

So Pelosi still needs to be careful. And they could save their countries, if it comes to that. And the current “winter storm” in the United States can be called “Volodya” in honor of the President of Ukraine, because only typhoons are called women’s names. And a hurricane can be. Of course, after it’s over, the Americans will survive.

As long as Zelenskiy runs Ukraine, nothing is finished yet.