HomeLatest NewsCalviño touches a discount to avoid a 'profit warning' of the great...
Latest News 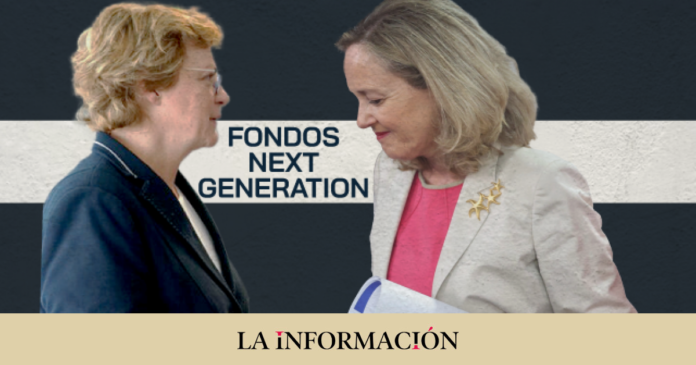 The public accounts of Spain, after the approval of the State Budgets, have become a Pandora’s box open to the greater glory of the partners and other friends who support the Government of Pedro Sánchez with their interested support in the Parliament of the nation. Each and every one of the allied forces have posted themselves at the window of Minister Montero, that of the Treasury, to collect the services that her inconvenient concertation of power entails. With the greed for Christmas bonuses sated, the hope that Vice President Nadia Calviño has been left with as a single face in her journey through the economic desert of 2023 now resides in the Next Generation funds, that community manna announced as the lifeline since the scourge of The pandemic has been going on for almost three years now but, apart from ‘why and why’, it has not yet reached the depths of the productive fabric of our country.

The 160,000 million euros that the European Commission has assigned to Spain represent 13 long points of GDP that, although dedicated to buying pipes, will help to unblock any eventual technical or real recession during the first months of the year. But apart from the push provided by community aid when it comes to sprucing up the national accounting figures, the real challenge consists in ensuring the effective and efficient destination of the multimillion-dollar resources, so that no one can question the nature of the management of the Public Administration. Calviño knows that he is at stake in Brussels because the community officials doctors are going to analyze with the gallows and knife any deviation from the contributions requested by Spain. The Government’s fame as a beggar before the European institutions is a double-edged sword for the international reputation that the head of economic policy cares for with such care.

The vice president was not a bit amused that the Budgetary Control Committee of the European Parliament has announced a hype about its visit to Madrid next February to check in situ how, where and with whom or who are spending the money of yore The German MEP Mónika Hohlmeier, who chairs this vigilance group, has emerged as the ringleader of a black legend against Spain, criticizing without mincing words the scant information that exists about the use and enjoyment of the 31,000 million delivered so far to our country. The irruption of the brand new community ‘woman in black’ occurs just when the Government has just announced the request for a third disbursement worth another 6,000 million euros, a game that is linked to compliance with the great taboo that the definitive reform of the public pension system in charge of Minister Escrivá.

Moncloa has transferred the ‘hot potato’ to Calviño so that he can luck out his best trades before the community institutions, leaving the image of Pedro Sánchez safe

The thinking heads of the Palace are now trying to articulate a defense statement that will scare away the suspicions of the community institutions. To this end, and with the primary purpose of keeping the boss’s back, they have transferred the hot potato to the Ministry of Economy, trusting that Calviño will know how to manage once again to exercise his best trades in Brussels and surrounding areas. The minister does not want to be left alone in the face of danger and she has started looking for some scapegoat on her own to help her show her face and assume first-hand the evidence of deficiencies that hinder and slow down the channeling of aid. The focus is oriented on the imponderable ‘Big Four’, to which from the beginning the host fingers were made in their role as necessary collaborators for the administration of such enormous resources.

The big consultants will have to exercise their unwavering dedication to service and to that end their four presidents; Federico Linares (EY), Gonzalo Sánchez (PwC), Héctor Florez (Deloitte) and Juan José Cano (KPMG), have been summoned to a summit with the ministerial staff that will take place before the end of the year. The economic vice president does not fully understand the data audited by some of these entities, which reflect the worst of the worst during the level of execution of the 2022 funds. The figures that circulate in the private sector basically coincide with those published by the General Intervention of the State Administration (IGAE) with regard to the budget for community endowments located this year at almost 28,500 million. On the contrary, the payments made differ ostensibly from the 6,400 million registered by the control body dependent on the Treasury and the 2,500 cases that the companies handled.

These imbalances have reached the ears of the Eurochamber and they can place Nadia Calviño in the pillory if they are not properly corrected before the community beach watchers come to show off their muffs in these parts. To add fuel to the fire, some of the large listed companies called upon to serve as a channel for channeling funds to SMEs have felt obliged to their investors and have begun to show serious fears in their international reports in the face of obstacles, red tape, and even politicians who exist to handle gifts of great magnitude. The big companies had launched too many bells on the fly and now have to heal themselves by issuing what, in official media, it is feared could become a kind of ‘profit warning’ about the development of the Next Generation program in our country.

The Government needs to make common cause with its main subcontractors and persuade them to show more gratitude in the statistical purification of the data, putting the accent on the tenders carried out and the calls resolved, without observing greater excitement. In the end, it is a question of distributing not only the resources, but also the responsibilities among the large beneficiary agents in the invitation, emphasizing that the permeability of the funds ultimately depends on the solvency of their recipients and the managerial will of the funds. entrepreneurs to dedicate the aid to productive investment and not to the improvement of their business margin. Moncloa demands that each stick hold its sail for the amount that it brings and, above all, that no one dare question the great maker who, for better and never for worse, is Pedro Sánchez. The mission is clear and forceful. Protect the king in exchange for good pawns and even if the queen has to be sacrificed.

Share
Facebook
Twitter
Pinterest
WhatsApp
Previous article
Coward, Dunce and Experienced are back: images of the new version of the New Year’s film based on Soviet classics have been released.
Next article
Putin promised Pasechnik to allocate subsidies for salaries and the preservation of the work of coal companies KXan 36 Daily News