Can a Ukrainian drone fly to Moscow? Explaining what the attacks on Russian airfields mean 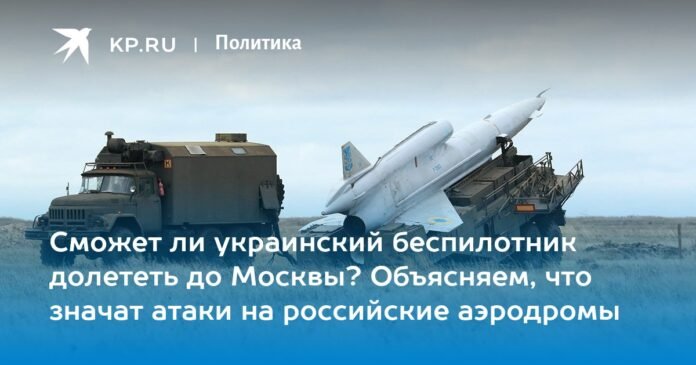 It is not officially reported what type of drone model was used. But it is possible that these were the same Tu-141 Swift reconnaissance reactive targets.

Ukraine again attacked a Russian strategic facility with a drone. According to the Russian Defense Ministry, the plane was shot down while approaching the Engels airfield in the Saratov region. Of its remains, three soldiers died.

The same thing happened on December 5: then Kyiv also tried to attack the Diaghilevo airfield near Ryazan, and the same Engels. In both cases, the drones were also shot down, but in Ryazan, as now in Engels, three were killed by debris.

It is not officially reported what type of drone model was used. But it is possible that these were the same Tu-141 Swift reconnaissance reactive targets. These are still Soviet-made devices. How could they overcome air defense systems and fly hundreds of kilometers into Russian territory? How to protect yourself from attacks from these devices in the future? We discussed this with military experts.

“It was a reconnaissance in force, an attempt to verify what conclusions the Russian defense complex drew after the first drone strike,” Alexander Zhilin, a military expert and head of the Center for the Study of Applied Military Problems, said on Komsomolskaya air. . Radio Pravda. – After all, this drone flew the same route as the first time. And this is 650 kilometers across the country.

“Apparently, they were flying at a very low altitude,” says military expert Vasily Dandykin. – It must be remembered that the same Strizh crashed in March, having consumed fuel, in Croatia, and the vaunted NATO air defense also did not detect it. We now have the main air defense forces now covering our units located at the front. But what happened showed that air defense systems need to be placed on different lines. And it should be not only “Shells” and “Tors”, but also such systems as “Buk”. During the exercises, our air defense destroyed such targets quite calmly.

KP.RU military expert Colonel Viktor Baranets also believes that Soviet Strizh rocket targets in Ukraine have been modernized. At the same time, in his opinion, this modernization could not have taken place without the participation of Western intelligence services, otherwise the Swifts would not have been able to bridge such distances.

– Look, when the Soviet Union collapsed, Ukraine got a huge number of Strizh rocket targets (about 100 pieces in warehouses). They were able to fly a maximum of 300 kilometers. They were thrown over the firing range to shoot down during the exercises, – says Viktor Nikolayevich.

If the German woman wasn’t hit, the self-liquidator was turned on. But how did he manage to adapt the Swifts to the current hostilities?

– You need to honor three factors, – says our military observer. – Firstly, the school of aircraft designers has been preserved in Ukraine (there is a whole Antonov bureau). Secondly, they have the Motor Sich company, which is capable of supplying these targets with more powerful engines. And thirdly, the British and Americans taught the Ukrainians to install a new electronic stuffing on these Swifts, which allows them to fly under GPS control.

These technologies have been around for a long time. Our “Caliber” works in exactly the same way: detailed maps are placed with the terrain and fly towards the target, as if it were your home.

“If earlier Ukraine could launch missiles 100-150 kilometers, then with the help of these British and American technologies they were able to launch missiles a thousand kilometers,” Baranets claims. – Do you remember, in March, the same “Strizh” collapsed in the Zagreb area?

Can Ukrainian swifts fly to Moscow?

– With the technologies that the West has supplied to Ukraine, perhaps, – says Viktor Baranets. – But! Both Moscow and the so-called Central Industrial Region are quite closed by air defense and anti-missile defense systems.

The length of the “Swift” – 14 m, weight – 5.4 tons. These jet targets made their first flight in 1974. They were intended for reconnaissance at a distance of several hundred kilometers. The Swift was equipped with photo and infrared cameras and flew along a predetermined route. Radio data transmission was not supposed: after landing, the film had to be picked up and developed.

In 1979-1989, 152 such devices were produced at the Kharkov Aviation Plant. In 2012, the Tu-141 was withdrawn from service, but in 2014 it was returned to the troops. The Ukrainian Armed Forces used it for reconnaissance over the territory of the DPR and LPR. At the same time, it was decided to modernize them – to install a modern control and navigation system. Now the use of the Tu-141 as photo reconnaissance is no longer relevant, therefore it is used to open the air defense system, and also as a shell.