Cancer survivor Elena Ksenofontova spoke about her husband who strangled her, bullying, Russophobia and a special operation 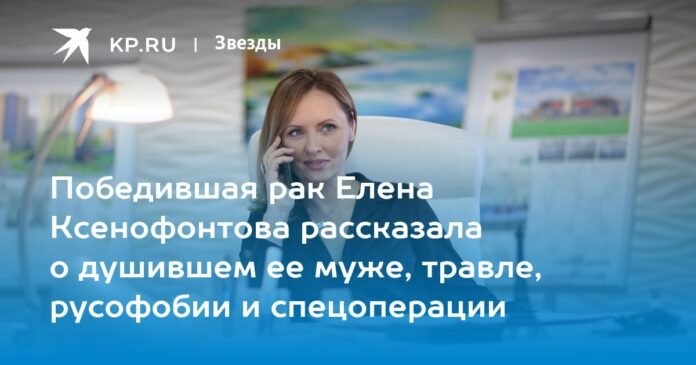 Elena Ksenofontova after the end of the projects “Kitchen” and “Hotel Eleon” does not appear on the screens so often.

The star of the TV series Cadets, Heartbreakers and other popular projects, Elena Ksenofontova, after the end of the Kitchen and Hotel Eleon projects, does not appear on the screens so often: in the last two years the artist has released two projects . It is even more interesting to watch an interview with Ksenofontova, who spoke frankly with her colleague Vyacheslav Manucharov. KP.RU gives some important snippets of this conversation.

ON BUY AFTER CREAM ADVERTISING AT THE END OF FEBRUARY

“I had agreements, obligations. I don’t want to apologize or make excuses to anyone, I’ve been putting it off. [публикацию поста в период начала СВО], the best I could, but in the end I had to publish this post. It’s hard to explain to everyone that I was held hostage to certain rules. As she could, she resisted. And I went for it, knowing what I was doing. We continue to live. And we have to move on.”

ON THE ASYMMETRY OF HUMANISM

“I don’t think if my house is bombed today and I sit in a bomb shelter, then in Ukraine people will quit their jobs and sit down in solidarity. At the same time, I am an absolute empath. I get sick from the news, I cry a lot. I sincerely sympathize to this day. But the amount of malice and wishes directed at me by people I sympathize with, so that I die, so that my children survive what the children of Mariupol experienced … for what? In 2014, a friend wrote to me: “May you choke on your oil!” I replied: “Let me at least smell this oil, so that I know what I am choking on.”

ON THE ATTITUDE TOWARDS SVO

“I can relate to the NWO however I want, but why should I be ashamed of being Russian? What the hell? Why yesterday, people who admired the athletes, the achievements of Russia, behave like this today? It turns out that this situation only revealed what was hidden? Turns out we’re not brothers. So why do you, not brother, reproach me and shout? Let’s decide. I was generally born in Kazakhstan, the absolute limit. He lived in a small mining town. We had Germans, Kazakhs, Greeks, Ukrainians, Poles, Finns, and Russians. And, I swear, I did not know then (in the early 70s) that xenophobia, anti-Semitism, etc. existed. And now several generations have grown up in Ukraine, who were brought up in hatred of Russia, and not just in denial of kinship. There are a lot of suitable people there, but we all get used to living in a certain environment.”

“You can’t move your fists. But I did not hit anyone (a criminal case was opened against the actress, who was sued by her ex-husband, lawyer Alexander Ryzhykh, accusing her of domestic violence-Auth.). I had to defend myself, otherwise they would have simply strangled me. And nothing is over yet. The trials have been going on for six years. Everything was organized to take this, this and this away from me. So far, people are doing it. Such is the vendetta. There was a period in which I experienced panic attacks, tears, fears, etc. And then I realized that my daughter was 5 years old when we ran away, and now 7, and we spent two years in all these confrontations. I cannot live in such a way that my daughter remembers her childhood like this.

“It seems to me that the situation with the disease is one more confirmation of the existence of God and his providence. As much treatment as they injected me with… literally to the state of a vegetable… with an inaccurate diagnosis… they cured me so that I acquired a handful of attendant sores. The diagnosis was not really made: “general changes in the brain.” Two doctors said “cancer.” And you live with it. And then a doctor from the clinic of the Administration of the President of the Russian Federation told me: “You know, Lena, the area around which your diagnosis revolves has not been studied so much that I feel sorry for you. You will simply be healed. And they can’t make a diagnosis. If you can learn to “negotiate” the disease and take pain relievers that you can get used to, you will live.” It had such an effect on me! She came home and told her husband: “We will negotiate.” This is how I live”

Scandal with the New Year’s comedy “Self-Irony of Fate.” What’s going on? (plus)