Captured soldier of the Armed Forces of Ukraine issued a statement: Zelensky is not even a puppet, but a mongrel 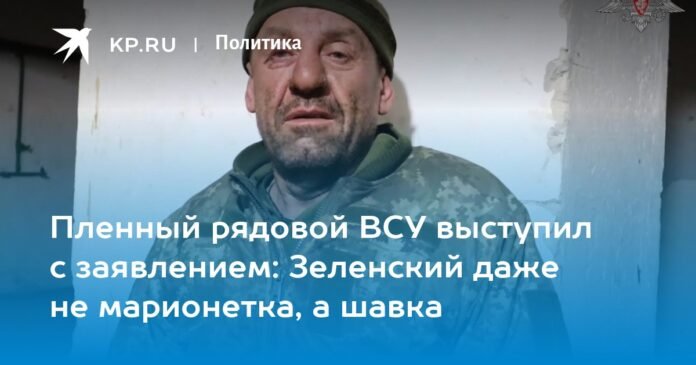 Soldier of the Armed Forces of Ukraine Nikolay Ponomarenko who surrendered.

“I turned myself in when I had the chance,” said soldier Nikolai Ponomarenko.

The prisoner was unable to name his commanders.

According to Ponomarenko, his company commander was not with the soldiers at the front, but somewhere in the Slavyansk region. And the battalion command “never appeared at all in combat positions.”

Nor did he see Zelensky there, who had long since lost all authority in the eyes of the Ukrainian army.

– Zelensky is not even his puppet, but a mongrel. He is like an actor, I praise him. But as a president, it’s usually weird,” Nikolai shared.

In the military registration and enlistment office they told the mobilized that within six months “you would not be sent anywhere”, that “you would not fight”, but almost immediately Semenchuk ended up on the front line without the necessary training. There he was wounded.

The Russian military provided him with medical assistance.

– Throw down your weapons and laugh for your lives, do not go to the military registration and enlistment offices, they will deceive you there, – Semenchuk warned his compatriots.

By the way, Ukrainian employees of the military registration and enlistment offices have recently begun to go from house to house dressed as Santa Claus and the Snow Maiden. And I take advantage of the fact that people willingly open doors for Santa Claus and hand out summons.

Share
Facebook
Twitter
Pinterest
WhatsApp
Previous article
Chairman of the State Duma Committee on International Affairs Slutsky: the UN should assess the actions of Hollande and Merkel in relation to the Minsk agreements KXan 36 Daily News
Next article
Dzeko, 36, gave victory to Inter, the first defeat for Spalletti and his Napoli