HomeLatest NewsCatalonia, Andalusia and Madrid, the CCAAs that receive the most money from...
Latest News

Catalonia, Andalusia and Madrid, the CCAAs that receive the most money from the Treasury 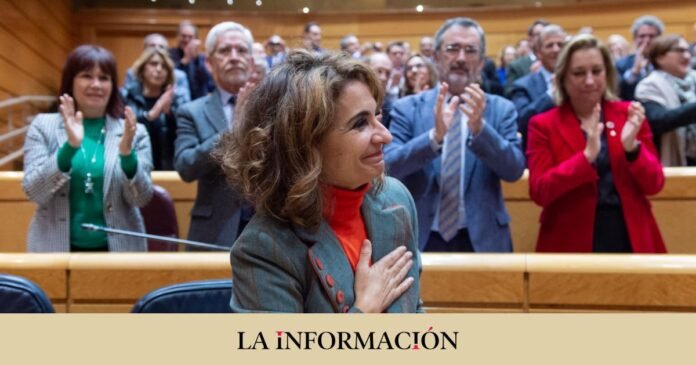 The Ministry of Finance and Public Function has entered a total of 111,276.13 million euros by way of deliveries on account to the Autonomous Communities of common regime and to the cities with Statute of Autonomy of Ceuta and Melilla during this financial year. The figure represents an increase of 6.3% compared to last year. Payment of deliveries on account is made monthly, through two deposits to the CCAA and the Autonomous Cities. Specifically, in the month of December, these territorial entities have entered 9,273.01 million euros, compared to 8,721.05 million a year earlier, that is, 552 million more. Specifically, Catalonia, Andalusia and Madrid -in this order- have been the three autonomies that have received the most money. Catalonia has entered 1,744.32 million euros, Andalusia 1,726.62 million and Madrid Madrid 1,308.3 million.

The portfolio directed by María Jesús Montero thus complies with the regional financing system, which operates by means of installments on account of the tax resources that are estimated to be paid in throughout the year as personal income tax (the regional rate) and percentages set by the law that correspond to VAT and Excise Taxes and that the central State advances, according to the ministry itself in a press release. To these figures resulting from the estimate of tax revenue based on the economic forecasts included in the General State Budget for 2022, are added the deliveries on account of the Global Sufficiency Fund and the transfer from the Guarantee Fund for Fundamental Public Services.

In addition to the resources provided by the Autonomous Financing System, the General State Budget for 2022 includes two items of extraordinary financing for the CCAAs under the common regime and Cities with Autonomous Statute. The first of these was distributed in March and obtained 3,067 million euros for these administrations to compensate for the economic damage caused by the implementation by the executive of Mariano Rajoy of the Immediate Supply of VAT Information System (SII-VAT ).

Catalonia, Andalusia and Madrid, the ones that receive the most money

The other extraordinary financing item endowed to increase its financing, of 4,404 million euros, has made it possible to cover the loss of resources that they have experienced in 2022 due to the global negative balances of the 2020 liquidation. In July a figure was distributed to the Autonomous Communities more than 3,323 million euros and in August the rest of the endowment, for an amount of more than 1,080 million euros, according to data provided by the Ministry.

The Treasury ensures that the measures “are in line with the Government’s commitment not only to protect the resources of the financing system, but also to strengthen the financial situation of the Autonomous Communities by providing them with extraordinary funds, as it has been doing in recent years”. Thus, in 2020 a non-reimbursable 16,000 million euro fund was generated so that the 17 Autonomous Communities and Cities of Ceuta and Melilla could face the economic cost of the pandemic, and in 2021 an additional 7,000 million euros were distributed to manage direct aid for companies and the self-employed, as well as another extraordinary allocation of 13,486 million non-reimbursable.