HomeLatest NewsCause of death of Alexander Shevchenko December 26, 2022: what the author...
Latest News

Cause of death of Alexander Shevchenko December 26, 2022: what the author of the hit “Everything will be as you want” died of 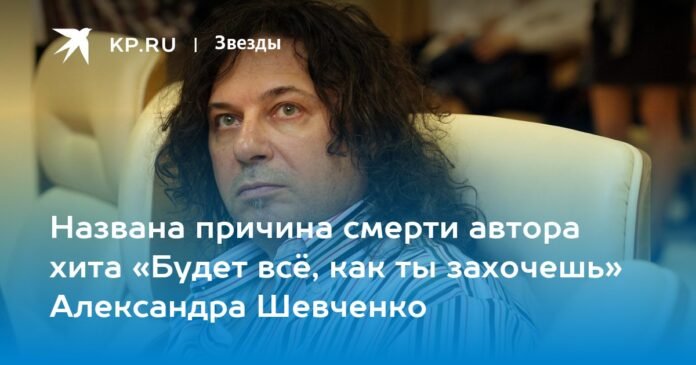 In June of this year, the musician turned 60 years old. For his anniversary, he recorded a solo album.

Singer-songwriter, former soloist of the group “Architects” Alexander Shevchenko died at the age of 60. This was announced on social networks by his colleague, the musician Yuri Davydov. According to preliminary information, the detached blood clot became the cause of death.

According to a close friend of the musician, Alexander Ponomarev, Shevchenko did not complain about his health and as if he went fishing on the weekend.

In June of this year, the musician turned 60 years old. For his anniversary, he recorded a solo album “White on White”.

Alexander Shevchenko was born on June 22, 1961 in sunny Turkmenistan in the city of Mary in the Kara-Kum desert, on the border with Afghanistan. His father served there, an officer in the Soviet Army. Mom worked as a music teacher. It was she who taught him musical literacy and gave the first lessons. At the age of 12, Alexander wrote his first song.

Since that age he has been playing music professionally. As a teenager, between the ages of 12 and 17, she worked as part of the Phaeton group. His family had moved to Leningrad at that time. He later became a member of the musical group Frisbee.

But the pinnacle of his work is the rock band “Architects”, where he worked as a soloist from 1989 to 1991. He became known to a wide audience after the release of the group’s album “Deja Vu” in 1997, as the author of the hit “Everything will be as you want.” For that song, Alexander received the Golden Gramophone Award.

In the late ’90s, the composer focused on production. He produced singers Alena Sviridova and Alsou. He became the author of most of Alsou’s hits, including the songs “Sometimes”, “Everything is the same” and “Winter Dream”, “First Snow” and many others. Alexander Shevchenko also wrote songs for other artists: for Jasmine (“It was snowing”, “Jumping over the fire”, “You are far away”), Irina Allegrova (“I am guilty without guilt”), Danko (“Do it once”), Tatyana Ovsienko (“Two nights and two days”) and many others, for example, for the English group “CLEA”

Farewell to Alexander Shevchenko will take place on December 29.

Share
Facebook
Twitter
Pinterest
WhatsApp
Previous article
Anatoly Karpov: We want the chess crown to return to our country as soon as possible
Next article
The arrival of Russian tourists plummets 83% as a result of the start of the war