HomeLatest NewsCaviar by the rules: how to protect yourself from a fake delicacy
Latest News

Caviar by the rules: how to protect yourself from a fake delicacy 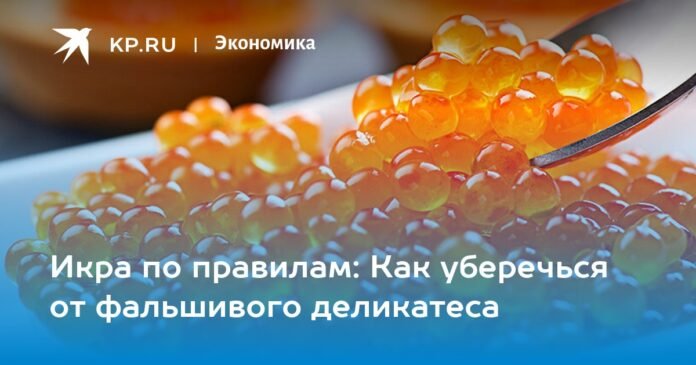 The closer the New Year is, the more actively people are interested in the main delicacy of the festive table – red caviar. This tasty and healthy product has been a traditional party decoration for decades. However, in recent years, its quality has been getting worse and worse. For example, if in 2018 Roskachestvo revealed violations in 31% of the tested samples, then in 2021 (Roskachestvo checks are carried out every few years) already in 81%!

This year does not seem to have improved. The independent consumer protection organization “Public Consumer Initiative” (CPI) counted more than 530 media posts about low-quality and fake caviar appearing on sale.

It is difficult to name a region where there would be no fakes – here are Moscow with St. Petersburg, Sevastopol and Central Russia, and the Volga region with the Urals, and Siberia with the Far East, in general, there are no barriers to the dominance of fakes.

In the markets and in small shops throughout the country, allegedly “natural red caviar” from Kamchatka and Sakhalin is actively sold at suspiciously low prices – 200-300 rubles per 220-gram jar. This is 10 times cheaper than a real product should cost. Why so much generosity?

– Because it is directly from the manufacturer, – sellers lie and do not blush, and people believe these tales.

And the coffin is simply opened: contrary to the inscriptions on the jars, people are not sold caviar, but colored jelly at best. Modern technology allows you to create orange balls that burst in your mouth. But this is not caviar, but an imitation; by the way, honest manufacturers indicate this on their jars.

The second type of forgery is much more dangerous – when the caviar is in jars, but it is not clear from what raw materials, in what conditions, in violation of technological and sanitary requirements. In such vials, E. coli, the prohibited toxic preservative urotropin, and prohibited dyes are almost certainly present.

It is very difficult to stop this conveyor of fakes. The fact is that, as a rule, shell companies are engaged in their release. Those that never existed, or that ceased their activities a long time ago. Employees of public and state regulatory organizations were repeatedly convinced of this when they tried to come with a check to the addresses indicated on the jars of fake caviar.

For example, checking the jars with the inscription “Granulated Salmon Caviar” produced by Sakhalin LLC “Persey” and “Navi”, OPI experts found that it was not caviar, but real poison. They began to check these manufacturers and it turned out that these LLCs had ceased their activities for several years. The Kamchatka Caviar House company does not exist either, which for several years has been listed as a manufacturer of the same caviar at 200 rubles a jar – imitated, passed off as natural.

There are dozens, if not hundreds, of such stories across the country.

– The problem is that even when they find out that the products are produced by a non-existent company, the control authorities have practically no opportunity to block their further circulation, – they note in the IPO. – A fake can be produced in one place, sold in another, and a third party will be indicated in the bank. Finding the location of the actual production and distribution channels is very difficult.

As a rule, such goods are sold as far as possible from the place of production indicated in the bank. The calculation of counterfeiters is understandable: no one will control a small business far from the place of sale. Therefore, the products of allegedly Kamchatka and Sakhalin companies are increasingly appearing in central Russia. But you should not be too lazy and check how it turns out that this is a hoax.

Even the presence of the Mercury information system does not save the situation. So, recently in the Magadan region, six shell companies were identified: Ananda, Beringia, Diaks, Klan, Miranda and U-Trade. All of them were listed in the information system “Mercury”, but only the addresses turned out to be false. The Rosselkhoznadzor specialists who went there did not find production sites, raw materials or products.

These “ghosts” are needed to legalize illegally produced caviar and circumvent the Mercury system. So, according to the documents, at least 3250 tons of products were delivered from these six sites to the central regions of Russia. In fact, this caviar is illegal, produced from nowhere, without quality control.

The scope of the shadow caviar business is staggering. In the Kaluga region alone, 460 facts of production of finished products without raw materials, in fact, from an illegally mined product, were recorded. Similar violations are found in other regions.

Another channel for the supply of “left” caviar is private transport.

– It remains only to imagine with horror what the real scope of shadow turnover is, if this year more than 145 tons of red caviar were exported from Kamchatka only in the luggage of passenger planes without any documents, – noted the IPO. – The average cost of caviar moved off the peninsula in this way since 2020 has exceeded 5 billion rubles.

Some buyers believe that illegal caviar, even if stolen, is no worse than legal caviar in terms of its qualities. This is not true. It is in the illegal ones due to non-compliance with the requirements for the production, storage and transport processes that E. coli, parasites and antibiotics are found.

The release of counterfeit caviar harms not only the health of buyers and the country’s budget, but also Russia’s water resources. Poachers outside of any quota destroy tens and hundreds of thousands of tons of salmon and other families of fish in the Pacific and North Atlantic, leaving spaces of lifeless water. At the same time, conscientious businessmen experience shortages of raw materials and are forced to raise the prices of their products. As a result, everyone suffers losses, except for the underground bigwigs in the caviar business.

How to get rid of this octopus, which has entangled the whole country with its tentacles?

Strengthening control over the transport of caviar from the producing regions will help in part to solve the problem. Thus, from November 1, 2022, Decree of the Government of the Russian Federation No. 1947 “On the procedure for ensuring compliance with the ban on the movement of people from the territory of the Kamchatka Territory by air in baggage and ( o) hand baggage of salmon fish species (red caviar) of non-industrial production of more than 10 kg per individual per flight…” However, “caviar smugglers” have found a way around this: they are sent frozen in plastic thermal boxes by the courier express delivery service “EMS” (“Russian Post”) up to 13 kg for 1 departure (only the weight of a standard transport box with caviar) Similarly, numerous small streams of caviar poached begin to seep into the country’s mainland and dissolve on the tables of Russians.

The most active measures for the comprehensive suppression of all illegal forms of caviar supply, as well as the introduction of accurate accounting and traceability of its production and invoicing, will help solve the problem, experts say.

– The Mercury system alone, which displays raw materials for the production of finished products, is not enough to prevent and suppress the receipt of counterfeit products on store shelves, – said OPI President Oleg Pavlov. – Obviously, the Russian caviar market needs more effective control mechanisms than the existing ones. It is necessary to take urgent measures to comprehensively suppress all illegal forms of caviar supply, as well as to accurately record the volume of its production and turnover.

OPI experts are sure that the connection of the caviar business to the National System for Digital Marking and Merchandise Traceability (“Honest Signal”) can save the situation. It has proven its effectiveness in controlling the production and sale of light industry products, dairy products, perfumery and cosmetics, tobacco products and medicines. The brewing industry is also preparing for the introduction of the “Honest Sign”.

– We are convinced that its implementation should not be delayed, – says Pavlov.

The combination of “Mercury” and “Honest Sign” is not an innovation, it is already working in the dairy sector. So, “Mercury” fixes the volumes of raw materials coming from farms to the plant, and “Honest Sign” – the volumes of finished “milk” leaving the assembly line. Thanks to this, Rosselkhoznadzor can automatically identify companies that produce more goods than they could with the raw materials they have. The monitoring of the department showed that the number of infringing companies decreased to 13-15% in October, although in June they were 17% and in April – 30%.