HomeLatest NewsCeasefire regime in the NVO area in Ukraine for Christmas. Why...
Latest News

Ceasefire regime in the NVO area in Ukraine for Christmas. Why is this not a truce? Latest news from January 6, 2023 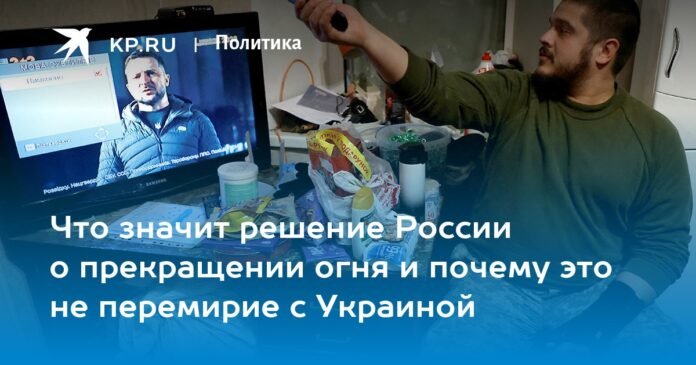 The Ukrainian authorities have not accepted the Christmas truce proposed by President Putin.

A day will soon pass, as Moscow’s alleged proposal for a “Christmas truce” in the NVO zone in Ukraine from January 6, 2023 is being discussed in the public information space. Discuss what is not. Because there is no such proposal, as there was not, and there is not. The truce was proposed by the Patriarch of Moscow and All Rus’ Kirill. At this level, his initiative remained. As for Moscow’s official move, Russian President Vladimir Putin announced a unilateral ceasefire for 36 hours on the eve and during the Orthodox Christmas celebration. These are, as they used to say in Odessa, two big differences.

A truce requires the consent of both parties for such action. And we already had the sad experience of concluding truces with the Ukrainian part of the same LDNR. There were “bread”, and New Year’s and Christmas truces, and also a cart and a small cart of others, which Kyiv violated at the expense of once and even earlier.

What does ceasefire mean?

Russia in this case is not at all interested in the reaction of Kyiv. Our decision, on the one hand, pursued the goal of allowing Orthodox believers in Ukraine to attend prayer services and services in churches, to pray calmly and without fear. That is, do not interfere with showing yourself as a Christian on this holy day. But on the other hand, and this was pointed out by the head of the DPR Denis Pushilin, this does not mean at all that the Russian army will lay down its arms and cover its weapons. They will not proactively take offensive actions or artillery barrages with rocket attacks, but any advance by the Ukrainian Armed Forces will be immediately suppressed, including the use of all means of destruction. Further, I will add this on my own, most likely, in cases of attempted attacks or shelling by the Armed Forces of Ukraine, not a “normal” one, but at least a double “response” will fly in response.

What did Ukraine and the West say about Moscow’s decision?

At the same time, Moscow has clearly tested “the other side” with its proposal. And the test was successful. The surprising unanimity of Ukraine and the West left no doubt: no one on the other side cares about civilians, their beliefs, or their lives. Msha Podolyak, adviser to the head of the Office of the President of Ukraine, was the first to open her “nasty” mouth, as is customary in recent times. Who said that Ukraine would not cease fire on Christmas, and that a “temporary truce” is possible only if Russia completely withdraws all troops “from Ukrainian territory.” In a similar vein, the former brigadier of the Luhansk boys, who now heads the National Security and Defense Council of Ukraine, Oleksiy Danilov, who recently promised the German Chancellor tank battles near Berlin, if he does not transfer the Leopard-tanks. 2 to Kyiv, spoke in a similar tone. Ukrainian Foreign Minister Dmytro Kuleba, who regularly gags with his exercises, spoke to the effect that one should not “take Russia’s proposal seriously.”

But the (so far) president of Ukraine, Volodymyr Zelensky, has outdone everyone. In his usual late-night video message, he couldn’t avoid this topic, but he spoke quite unequivocally.

“Now Russia wants to use Christmas as a cover to stop for a while the advance of our boys in the Donbass and bring equipment, ammunition and mobilized closer to our positions,” said this creature, who does not dare to call a person. a language. No one ever lied so bluntly to him. Even Arestovich. And the late “lossless” Tymchuk, who committed suicide, unable to bear the burden of his own lies. Where do the Armed Forces move in Donbass, damn comedian? Is that untimely and ahead of schedule to the grave? And in massive quantities.

Volodymyr Zelensky: “Russia wants to use Christmas as a cover to stop the advance of our guys in Donbas at least for a while.”

A little later it became clear that Kyiv and the West have an absolutely unified position on this issue.

“I am not eager to respond to anything Putin has said,” US President Joseph Biden said, hinting that Putin supposedly needs a breather. -I think he wants to get some oxygen.

The President of the European Council, Charles Michel, agreed with Biden, calling our decision on a unilateral ceasefire “false and hypocritical.” Words that fit so well with your own organization.

“Given the lack of confidence in everything that comes from the Kremlin, and for a unilateral ceasefire announcement to be convincing, we need to see concrete action from Russia,” said the spokesman for the EU Foreign Service, Peter. Stano, about Russia’s decision.

British Foreign Secretary James Cleverley has announced that Russia’s proposal for a Christmas truce will not promote the “prospects” of peace. German Foreign Minister Annalena Burbock also did not stand aside.

“The so-called ceasefire will bring neither freedom nor security to people who live in daily fear under Russian occupation,” said the German Foreign Minister, who had not previously been warned about the excessive use of intelligence in her position. .

They had the opportunity to prove themselves as people: they refused

– The hand of Christian mercy was extended to Ukrainians on the Great Holiday. Its leaders rejected it. I think that most of our military personnel who participated in the NWO exhaled calmly when they heard the refusal of the main Ukrainian clowns to cease fire on Christmas. Less trouble and cunning, – summed up both the Russian proposal and the response of the Deputy Chairman of the Russian Security Council Dmitry Medvedev. – People who have missed the opportunity to go to church, I’m sorry. But pigs have no faith and have an innate sense of gratitude. They only understand brute force and stridently demand food from the owners. This is what the training is based on. And it will be continued by the western swineherds.

– Even the illiterate German grandmother Burbock and several others who looked at the European pigsty managed to blurt out the inadmissibility of the truce, – continued Dmitry Anatolyevich. – Well, the heirs of the Nazis never spared either people or animals. they are not used…

And then Dmitry Anatolyevich made only one mistake – Burbock is still far from a grandmother. She recently turned 42 years old. Although, if you look at how he looks and how he thinks, then he is here too.

All of them have the opportunity to prove themselves as people, people. They rejected it.

Share
Facebook
Twitter
Pinterest
WhatsApp
Previous article
USE-2023 in basic mathematics. Challenge yourself, if you can solve these problems, you can’t be afraid of the KXan 36 exam Daily News
Next article
They discover a new protective layer in the brain KXan 36 Daily News