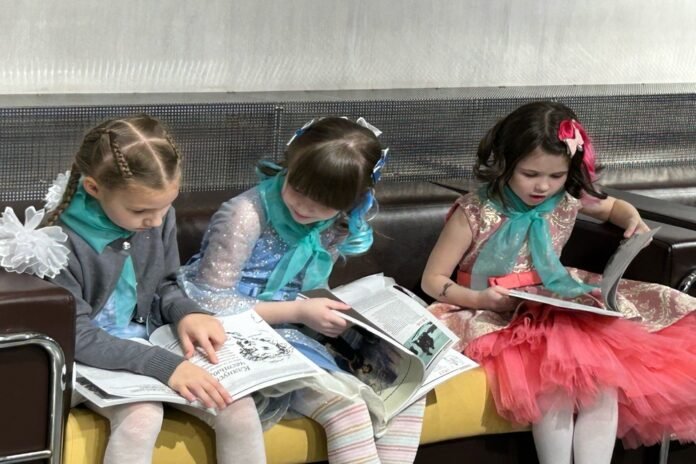 The children were shown a free performance of one of the best children’s theaters in the country – “SamArt”, which presented the premiere of the New Year’s quest “Alice’s Dreams”, full of incredible adventures and amazing characters, as always It happens with Lewis Carroll.

However, New Year’s miracles began even before the third bell. Before the start of the fairy tale, young viewers received sweet gifts with the logo of the publication from RG journalists. The funds for his purchase were taken from his fees.

But the main and brightest moment of the holiday was the presentation and presentation to each guest of the magazine “Rodina”: “Pushkin is ours. And that’s it!”. The organizers admit that there was some concern that elementary school students, and there were quite a few of them among the guests, might appreciate a serious historical magazine. It was the first experience of knowing the young public with Rodina. However, the children not only happily leafed through magazines, put sweets aside and exchanged impressions with teachers and volunteers (they helped schoolchildren who came to Samara from all over the region), but also stood in line to read their favorite poems from Pushkin to journalists. .

SamArt director Sergey Sokolov admitted that by organizing the action with RG, first of all, he wanted to support the children of the families of the mobilized:

– Now we play three or even four shows a day. After all, even more children of different age groups, their parents, teachers, grandparents will be able to come to us. Every year we bring such a creative gift and we see smiles on the faces of our viewers that give us hope for a better future.

For the children of the military in the Samara region, several festive events have been prepared at once, where they can come for free. They will be invited to Ilya Averbukh’s ice show. And the city’s Christmas trees will be held not only at SamArt, but also at the Opera and Ballet Theater.