HomeLatest NewsChildren's lives turned into hell with crime, murder and alcoholism: how a...
Latest News

Children’s lives turned into hell with crime, murder and alcoholism: how a movie destroyed the lives of young stars of Soviet cinema. 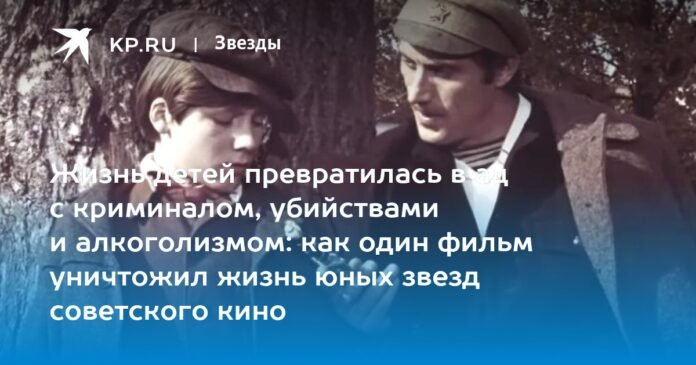 The TV adventure movie Dirk was released half a century ago.

The shooting of the TV movie “Dagger”, based on the detective story of the same name by Anatoly Rybakov, took place in Vilnius and Grodno. But a significant part of the location filming took place in Moscow. An observant viewer can easily recognize in the frames the Church of the Resurrection of Christ on Kadashi (near Tretyakovskaya), and the walls of the Novodevichy Convent, and the old Donskoy cemetery, founded in the 16th century. The places are historical, ancient, wrapped in mysticism and secrets. This atmosphere rhymed well with the detective plot of the picture, but then it mysteriously affected the fate of the main characters of the picture. More precisely, its artists. For many, fate was tragic.

A year after Dirk, during the filming of the sequel Bronze Bird, the film’s director Nikolai Kalinin died under unclear circumstances. He was only 36 years old. The mystery of his death has not yet been revealed. According to one version, he died suddenly after a fight at the Minsk police station.

The picture was shot at the film studio “Belarusfilm”. Almost all the young actors who played the main roles in Kortik are from Minsk. Surprisingly, despite the great popularity and recognition, almost none of them became professional artists.

Igor Shulzhenko, who played Slavka Eldarov in Kortik and The Bronze Bird, was an exemplary pioneer and a diligent student of the Minsk modeling school before starting to act in films. Filming lasted for almost two years. At this time, the child actors did not go to school, they talked, they studied somehow. After school, Igor Shulzhenko entered the Radio Engineering Institute, leaving it a year later. He worked as a bricklayer. He died at the age of 49 from alcoholism.

Igor Shulzhenko played a diligent pioneer in the film, but the life of the young actor did not work out.

The fate of Alexander Primako, who played the homeless girl Mishka Korovin, was tragic. And her early fame was of no use to him. Alexander tragically died at the age of 30. He was coming home after the party. He was podshofe. Some bastards beat him up and threw him on the tracks. The next morning, the corpse of him, cut by a train, was found on the railway …

But the most handsome and criminal fate was the performer of the main role – the “ideological pioneer” Misha Polyakov. Sergei Shevkunenko became a repeat robber, a criminal “authority”, the leader of the organized criminal group “Mosfilm”.

On the set of “Dagger” in the company of boy-actors, he was the only Muscovite.

Sergei was born into a film family. His father was the director of one of Mosfilm’s creative associations. In honor of the birth of his son, he wrote the play “Earring with Malaya Bronnaya” (after the name of the song of the poet Yevgeny Vinokurov), which at one time was part of the repertoire of many theaters. His father died when Serezha was only three years old. The boy was raised by his mother, who worked at the film studio as an assistant director.

Sergei Shevkunenko spent almost 15 years behind bars, which ended in 1995.

There is nothing surprising in the fact that Mosfilm has become a second home for the boy. According to the memoirs of the film studio staff, he was an intelligent and highly educated child, but with a complex character: he did not recognize any authority. The character of the teenager did not improve when, after the premiere of Dirk, all-Union fame fell on him. Thousands of fans from all over the Soviet Union wrote him letters and declared their love for him. The naive romantic young girls did not know that his idol was registered in the police nursery since he was 14 years old.

After the eighth grade, he went downhill: drank, fought, took money from teenagers. In another fight, she severely beat a neighbor, for which she received the first term from her. She was awarded a certificate of secondary education in a children’s correctional colony.

Then the girl idol went to jail for robbery at the Mosfilm buffet. At the movie studio, he worked as a lighting designer, and at night he would go to the buffet to get a snack for his drunken colleagues. And then her life was like a catchphrase from another movie: she stole, she drank, to jail! From jail time to jail time. Sergei was not at liberty for more than a year.

From local punks he made a gang that robbed passers-by on the street. He was arrested for robbery, drug possession. He then went to jail for gun possession. He tried to escape, but it only extended his time, as if he had not taken the path of correction. He sat down again, for the storage of stolen icons. In prison, he was nicknamed “Artist” and “Boss”. He was released as a repeat offender. In the place of residence, he created the so-called “Mosfilm OPG”.

In total, the “ideological pioneer” had five convictions. In places not so remote, he spent 14.5 years, almost half of his life, cut off by a bullet fired by an assassin.

Late in the evening of February 11, 1995, he drove to his home on Pudovkina Street, where he lived with his mother. She entered the entrance, the assassin was waiting for her there. Maybe two. The first bullet hit Sergei in the stomach, the second hit the closed elevator doors. Shevkunenko ran into the apartment, but due to his injury, he did not have time to get the key out of the door. The killer, like in a hair-raising thriller, turned the key in the lock…

At the noise, Sergei’s mother, 75-year-old Polina Vasilievna, ran out of the room. She tried to prevent the criminal from entering. But he opened the door, shot her twice in the head in front of Sergei, who managed to yell: “What are you bitches doing! What are you doing… “. And she was shot three times in the head. She was only 35 years old.

This crime has not been solved. Which was not surprising in the mid-90s. Two weeks after the murder of Shevkunenko, TV journalist Vladislav Listyev was killed according to a similar scenario – an entrance control shot of the killer in the head.

Sergei Shevkunenko was buried with his mother at the Novodevichy Cemetery next to his father. The most surprising thing is that even today, although more than a quarter of a century has passed, fresh flowers lie on his grave. They are brought by fans who are in love with the desperate but righteous Misha Polyakov from the movie Dirk.