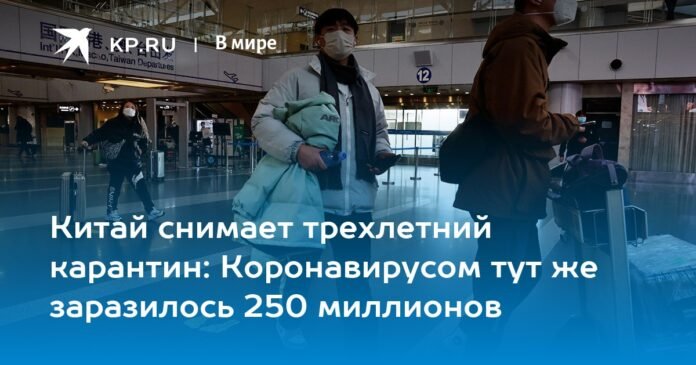 China to lift quarantine for arrivals in the country from January 8, 2023

In January 2020, China became the first country in the world to quarantine entire cities due to the spread of the coronavirus infection. The authorities of the Celestial Empire immediately adopted the so-called “zero covid” policy, which means instant and more severe quarantines for everyone who was not just infected, but simply passed as an infected person. People could stay for several days in a closed mall or Disneyland until all visitors are tested. And around the residential buildings where there were cases of coronavirus infection, they built real sanitary cordons. Such a strict policy could not but cause discontent among the citizens, especially since three whole years passed in such inconvenience. But the Chinese Communist Party has always had its own pervasive argument for this. Thanks to the measures taken, only 5,000 people have died from the coronavirus during the entire pandemic in a country of 1.5 billion inhabitants. Compare to a million deaths in the United States during the same time.

But everything comes to an end. The Chinese authorities officially announced that from January 8, the threat level of COVID-19 will be reduced from class A to class B. That is, the attitude towards disease control will be the same as for the HIV infection or viral hepatitis. The infected will remain isolated from society, but infected areas will no longer be cordoned off by entire blocks or even houses. And most importantly, most movement restrictions are being lifted. Already on January 8, foreign tourists will not need to comply with the mandatory five days of quarantine after arriving in the country, it will be enough to pass a covid test 48 hours before boarding the flight. The restrictions on outbound tourism will be gradually lifted. In January 2023, land passenger traffic between Russia and China will also open, reported the General Consulate of our country in Harbin.

Meanwhile, foreign media write about a strong outbreak of coronavirus in China. The Financial Times, citing unnamed sources, said 250 million Chinese, or a fifth of the country’s population, were infected in December. This is not surprising, given that for three years of sitting at home, herd immunity has not been formed there. But first, the virulence (that is, the infectious capacity) of the coronavirus has weakened remarkably in recent times, and second, the majority of the population has already been vaccinated, and more than once, the Chinese media replicated. All this leads local authorities to believe that the wave of infections will pass relatively painlessly.