HomeLatest NewsChoreographer Irina Povoroznyuk of the story about what remains behind the scenes...
Latest News 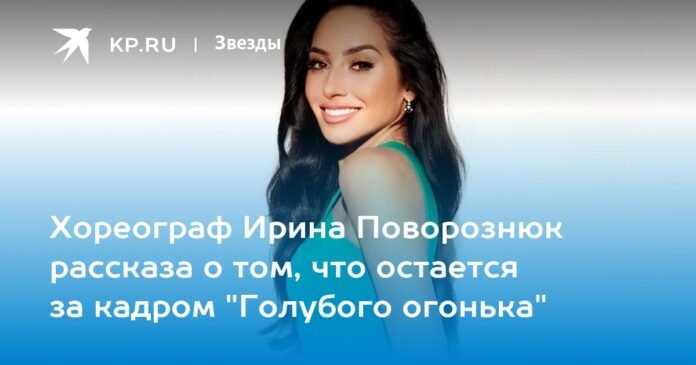 – Almost the whole country is watching Blue Light from the screens, during your work on the project, what unforeseen events occurred?

– A lot remains behind the scenes. The viewer sees only the final image, and how much preceded it, it is simply impossible to imagine. A very complex logistics has been built in the Blue Light pavilion, many specialists are involved in it. Force majeure on set happens all the time. It is difficult to work with animals (often an animal whose year begins – a goat, a rabbit, etc.) is brought to the “blue lights”. I know for sure that it is best not to attract animals, they are so afraid of an unnatural environment that they leave their “force majeure” in the hands of the artists. Once I came home after filming with a hare, I felt sorry for him … It happened that the props could not stand it or did not fit, and this happened just on the day of filming. Then the concept of the room was urgently redone. And what does this mean on the scale of the project, which is filmed at Mosfilm? Everything changes: the choreography, the costumes, the number of people on the stage … I was urgently taken to the room more than once, the costume was sewn for me literally in front of the “engine”. Naturally, the audience does not even know what is happening – everything looks perfect in the frame, but it cannot be otherwise.

– You have worked with many stars, including Philip Kirkorov and Natalia Oreiro. What difficulties did you have to face?

– There have never been any difficulties in working with artists. I have always clearly separated work and personal life, I never mixed these relationships. My task was not to make friends with artists, but to do my job well.

The hardest part for me was the tour. For example, when you are in Philip Kirkorov’s team and you have 25 concerts a month. The body simply cannot withstand such loads, it resists, it is very difficult to withstand frequent flights and train trips. I remember once I studied choreography on a plane on a Moscow-Khabarovsk flight, I danced in the hall with a phone in my hands and headphones… Fortunately, the flight was long, I managed to do everything. The main thing is to hum “ta ta ta” instead of familiar letters, so as not to attract too much attention.

I know that some groups select dancers according to the horoscope…

– You worked with Mikhail Shufutinsky for several years, how did you meet him?

– Collaboration with Mikhail Zakharovich is a significant period in my life. It all happened by chance. Shufutinsky’s team needed a dancer and a mutual friend recommended me. I had no plans to work in ballet, the job offer came to me out of the blue when I was swimming in the pool after training in the ballroom. A mutual friend was sure that he would be a perfect fit for Shufutinsky’s team. After talking with Mikhail Zakharovich, I realized that I simply could not refuse. They were so my people.

But then I thought I need to grow up. I was very worried and did not expect at all that they would let me go with a light heart, but it was a situation where I did not want to leave and needed to grow more. After a conversation with Shufutinsky, I came away inspired. I remember that he wanted me to do and achieve what was best for me. And I promised that, if necessary, he would replace the new ballet … We maintain relations, I visit him. Every meeting with Mikhail Zakharovich is very sincere. He is the wisest person, he is always glad if someone from the team develops.

– How are things now with work in the new role of a TV presenter (conducts concerts on Muz TV – ed.)?

– I did not expect this of myself. Surprisingly, he was back on stage. I feel very comfortable as a TV presenter – this is my element, my energy. Every time I go on stage, there is not a single doubt: I am exactly in the right place … The artists with whom I worked before as a choreographer greet me with a smile and an unspoken “hello”. Now we see each other more often, at concerts and film shows. And I hope we see each other regularly. I really want to become the host of a TV show on a federal channel. I hope everything goes well… In my opinion, television lacks something educational, on the one hand, light, and on the other, capable of engaging the viewer and broadening their horizons. I love to bring back from traveling around the world (and I travel a lot) some interesting facts, something about the culture of other countries. If famous artists became heroes of the show, that would be great. It is possible to come up with some kind of test for them, so that in the end both learn about something and the audience. Bright and simple.

Share
Facebook
Twitter
Pinterest
WhatsApp
Previous article
Kaguya-sama “Love is War”, according to the leaks, the film will be released in Mexico and Latin America.
Next article
Media: World champion Pavel Rostovtsev will become the head coach of the Russian biathlon team KXan 36 Daily News