HomeLatest NewsChristina Asmus celebrated the New Year in Dubai with her daughter and...
Latest News 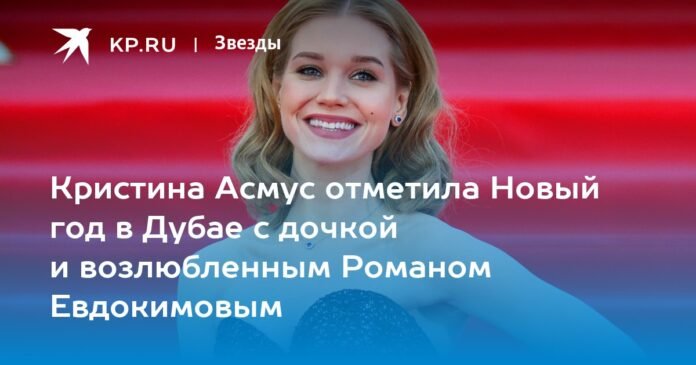 Kristina Asmus and Garik Kharlamov divorced in 2020, but still live in the same house. The actress occupies the top floor of the mansion, the showman, the bottom. Together with them, 8-year-old daughter Nastya and Garik’s mother Natalya Igorevna share luxury real estate on the Rublevo-Uspenskoye highway.

On New Year’s Eve, Kharlamov showed on social networks with whom he celebrated the holiday: in the photo, his mother gently hugs her son’s beloved, actress Katerina Kovalchuk, near the New Year tree. Many then were surprised: how dare Garik bring his girlfriend to his house? And where was his ex-wife at that time? Kristina and Katerina became friends and celebrated the New Year together?

But it turned out that Garik simply took advantage of the absence of the former. Asmus celebrated the New Year not at home and not in Russia at all. The actress flew to Dubai with her daughter Nastya and her boyfriend Roman Evdokimov. They were accompanied by Christina’s sister, Karina, and her niece Sofia.

On January 1, Christina congratulated the fans on the New Year and announced that she was in Dubai. Photo: social networks.

On January 1, Asmus congratulated fans on the New Year, stating that he was in Dubai. Later, Christina posted several videos taken while on vacation. The actress and her daughter stayed in a spacious apartment with elegant gray furniture and light-colored floors. The apartment has a kitchen-dining room combined with a living room. The interior of the apartment is decorated with plants in ceramic pots and paintings on the walls. In one of the videos, the actress, standing in the living room, opens a bottle of champagne, drinks a fizzy drink straight from the bottle and eats a tangerine.

Christina and Roman celebrate the New Year. The actress opens the champagne…

…and sandwiches in a tangerine. Photo: video frame.

In another video, Christina said that she invited Santa Claus and Snow Maiden for her daughter and niece. New Year’s magicians came to her Dubai apartments and organized a fun holiday with magic tricks, games and dances. The children’s party ended with the opening of gifts. Nastya received a graphics tablet, and her cousin Sophia received a backpack.

Until recently, Roman Evdokimov carefully concealed his affair with a colleague at the Yermolova Theater. But now I decided not to hide anymore. On social media, he posted a photo taken in Dubai’s Asmus apartments: the same gray furniture, light-colored floors, and potted plants. And in the mirror behind him you can see the reflection of Christina, who is photographing Roman with a mobile phone.

Evdokimov’s forehead in the frame is decorated with rhinestone applications. The same shiny sticker was worn by Asmus’s niece during a boat trip. Christina and her family went on a boat at night to watch the New Year’s fireworks over the Persian Gulf. In the frame, Sofia has the same sparkling jewelry as Roman. Apparently, Evdokimov got along with Kharlamov’s daughter and his niece and had fun with the girls.

Behind Roman you can see Christina’s reflection in the mirror. On her forehead is a jeweled appliqué, which her niece Asmus wore on New Year’s Eve. Photo: social networks.

The fact that she is happy and in love, 34-year-old Christina announced last year. Asmus and Evdokimov work together at the Yermolova Theater under the direction of Oleg Menshikov. Roman is six years younger than Christina. It surprises many: how does beloved Asmus bear the fact that she still lives under the same roof with her ex-husband and her ex-mother-in-law? The situation is really not commonplace, but it seems that so far the lovers have to put up with it.

Christina organized a fun holiday for her daughter Nastya and her niece Sofia. Photo: video frame.

Recall that Garik and Christina live together became known a month ago. The showman, on his YouTube show, said that he left his ex-wife a “house of vomit and piss.” She responded on social media that he didn’t leave her any home and money too. Word for word, and in the course of a public skirmish, the actress’s subscribers were shocked to learn that two years after the divorce, Asmus and Kharlamov still share a living space for two.

During a public dispute with her ex-husband, Kristina stated that Kharlamov threatened her and her daughter to stay in the mansion on Rublyovka and did not allow them to move to another dwelling. “But this is not a normal situation,” says the actress. Asmus asked her husband to buy another living space for her and her daughter and not keep their captives in the Rublev mansion.

Fans of the star are perplexed: Christina earns very well, and she could have moved away from her ex-husband a long time ago. For example, renting a new house or buying an apartment with a mortgage. But for some reason, she prefers to share square meters with her ex-husband under pressure from her.

Share
Facebook
Twitter
Pinterest
WhatsApp
Previous article
There was a video of how the horse rushed into the crowd in the center of St. Petersburg KXan 36 Daily News
Next article
Biden denied South Korean leader’s words about joint nuclear exercises KXan 36 Daily News